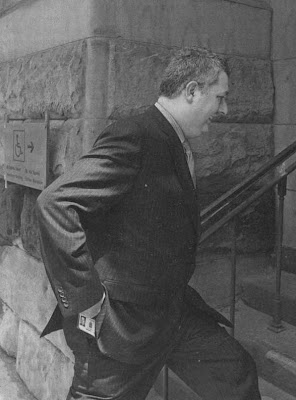 What does the article say about Guy Giorno? "Any discussion with insiders about control from the centre quickly turns into a debate over the relative strengths and weaknesses of director of policy Guy Giorno ... Nicknamed `Rasputin'...he is, some say, the ultimate insider, a right-wing true believer who sidelines any ministerial move that doesn't jibe with his ideology ... I am concerned when I see that nothing can get through without the thumbs up from Guy Giorno. I asked before, what riding does he represent? What constituency elected him? (1)

Guy Giorno, as many are no doubt aware, is not just a consultant or chief of staff for Stephen Harper. He is Stephen Harper. It's only been since 2008 that the media has started calling Harper a brilliant strategist. Before that he was kind of a lunk head. Always putting his foot in his mouth.

Then along comes Guy, and nothing is left to chance. I'll bet Harpo has a little chip embedded somewhere with Giorno choreographing his every move. "Watch out for that step" ... "There's a car coming" ... "You forgot to zip up."

I've realized that I have to do the same with Stephen Harper as I did with Mike Harris. Ignore him and go straight to his puppet master: Guy Giorno.

So when I learned that Canada is going to continue with tax breaks for the oil patch I was not at all surprised. Giorno is a lobbyist. In fact he is the king of lobbyists. Maybe even the emperor of lobbyists.

And when Canada was adopting the Kyoto Protocol this emperor of lobbyists swung into action creating the Canadian Coalition for Responsible Environmental Solutions, which was an astroturf front group for National Public Relations (NPR), the lobbyists for ... you guessed it ... the oil patch.

And guess what hand picked former federal environmental minister was on hand for the festivities?

There were speeches by coalition organizers, and a particularly passionate Ontario energy minister, John Baird, made his anti-Kyoto rallying cry. Needless to say, the audience was very receptive. Baird’s parliamentary assistant, Scarborough MPP Steve Gilchrist*, who at one time helped block developers’ plans for the Oak Ridges Moraine, was busy propping open doors with chairs to give relief to a very hot and stuffy room. I couldn’t help remarking to him that perhaps the room was so unbearably hot because of climate change. He was not amused. (2)

And of course we find the big guy, 'Big Guy', lurking in the shadows:

While Eves has been slightly slippery on just where he stands on Kyoto, it was interesting to learn that this meeting was organized by Guy Giorno, Mike Harris’s old chief of staff and ultimate Tory party insider. Giorno now works with National Public Relations (NPR), the coalition’s high-priced lobby firm.

Two days after the meeting, Giorno sent every MPP at Queen’s Park an e-mail suggesting what they might say in op-ed news pieces or letters to their constituents about Kyoto. Then Liberal and NDP members, for whom the missive was obviously not intended, were sent a second e-mail that read, "Unfortunately, materials from the Canadian Coalition for Responsible Environmental Solutions were sent to your office in error in a previous e-mail. I do apologize for any inconvenience."

So now we have Mike Harris’s former number-one man trying to dictate environmental policy to our government members. It might make you wonder if the Eves government is really any different from Harris’s where the environment is concerned. It certainly doesn’t seem to be. Then there’s Klein’s relationship with the coalition, which is kind of like that of an organized crime boss and his "legitimate business activities."

Leaves me asking the same question as they asked in 1997 about Guy Giorno: "What riding does he represent? What constituency elected him?"

*Steve Gilchrist was the former boss of Harper MP Paul Calandra: "The Conservative minister of municipal affairs and housing is under Ontario Provincial Police investigation after allegedly telling developers to go through his own personal lawyer, Tory fundraiser Peter Proszanski, to get an audience with him — a privilege that'd cost them $25,000 each ... Even juicier, Gilchrist has a criminal record for tax evasion dating back to 1984, shared with his father, who was at the time a federal Tory MP." (3)

3. How Mike Harris and his minions manipulate TV news, Ryerson Review of Journalism, Summer 2000
Posted by Emily Dee at 3:03 AM