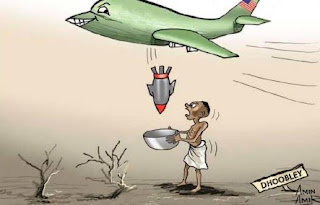 Adrian Bradbury, Founder and Executive Director of Athletes for Africa and Football for Good, recently wrote a piece on Canada's new direction when it comes to foreign policy:

An internal DFAIT email was leaked this summer which outlined a series of shifts in the language of Canadian foreign policy. These changes were politically directed, coming from Foreign Affairs Minister Cannon’s office. The terms "gender equality," "child soldiers," "international humanitarian law," "good governance," "human security," "public diplomacy" and "The esponsibility to Protect" have been blacklisted from government parlance.

While already limited to an unprecedented degree on what they are allowed to say in public, Canada’s civil servants and diplomats are now banned from using certain words. (1) Last year Oxfam Canada was critical of Harper's foreign aid to Afghanistan. (Unfortunately they may be one of the humanitarian organizations on the chopping block.) "Oxfam Canada welcomes Canada’s commitment to increase aid to Afghanistan but remains concerned that military objectives are trumping aid effectiveness in setting priorities." (2)

Not long after that, the Toronto Star reported of the G8 Summit:

During this year's summit, humanitarian groups closely following the talks accused Canada of trying to water down the G8's key 2005 commitment to double aid to Africa by 2010 and a pledge to spend $60 billion fighting AIDS, malaria and tuberculosis. This was denied by Canadian officials, but it was clear that, after watching Harper at the G8 for three years, anti-poverty activists longed for the days when Liberal prime ministers Jean Chrétien and Paul Martin used their influence to push their summit counterparts to open their wallets and do as much as possible for the world's poor. (3)

The Harper government made other changes to our foreign policy without permission or advice from anyone, that almost went unnoticed until Embassy magazine reported on them:

With subtle strokes of the pen, it appears the Conservative government has been systematically changing the language employed by the foreign service and, as a result, bringing subtle but sweeping changes to traditional Canadian foreign policy.

In an email communication obtained by Embassy, staff at the Department of Foreign Affairs express concern about frequent changes being made to commonly used terms, particularly where such changes are not consistent with accepted Canadian policy, and which may be carried out to minimize international obligations on issues as complex as the Omar Khadr case.

Among the changes identified are the excising of the word "humanitarian" from each reference to "international humanitarian law," replacing the term "gender equality" with "equality of men and women", switching focus from justice for victims of sexual violence to prevention of sexual violence, and replacing the phrase "child soldiers" with "children in armed conflict." (4)

This is all part of a very disturbing pattern, I'm afraid.

1. The Government's Newspeak: Recent changes to the language of Canadian foreign policy represent a fundamental shift in how the country presents itself to the world, By Adrian Bradbury, The Mark, December 2, 2009