St. Ignatius Institute at the University of San Francisco, was founded by Jesuit Fr. Joseph Fessio in 1976, in reaction to the liberalizing influences of the Second Vatican Council, which was an attempt to modernize the church's teachings, to adapt to a changing world.

The final doctrine was approved by Pope Paul VI, on December 8, 1965, and presented "... a church that is primarily a worshiping and serving community open to various points of view and religious traditions." (1)

Not everyone liked this move away from long held traditions, and Fr. Fessio sought to offer an alternative to this new 'enlightenment'. 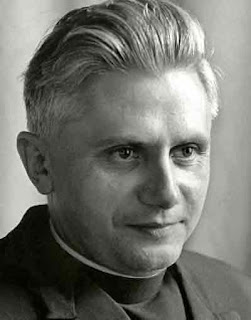 What traditionalists like Fr. Fessio feared, was not just relativism, that questioned truth, but also that liberalization would lead to the spread of communism, and for answers he turned to the teachings of Cardinal Joseph Ratzinger.

"In the '80s, the theology of liberation in its radical forms seemed to be the most urgent challenge for the faith of the church. It was a challenge that required both a response and a clarification because it proposed a new, plausible and at the same time practical response to the fundamental question of Christianity: namely, the problem of redemption."(2)

What Ratzinger proposed was an active involvement in politics, as the only way to stop the spread of communism, that would mean the end of religion.

We experience a world that does not correspond to a good God. Poverty, oppression, all kinds of unjust domination, the suffering of the just and the innocent constitute the signs of the times and of all times.(2)

Since Marxism was providing alternatives to oppression and promised an end to poverty, through collective efforts, there needed to be a move toward individual freedom, because only through individual freedom could one achieve redemption.

The fall of the European governmental systems based on Marxism turned out to be a kind of twilight of the gods for that theology of redeeming political praxis. Precisely in those places where the Marxist liberating ideology had been applied consistently, a radical lack of freedom had been produced, the horror of which now appeared out in the open before the eyes of world public opinion. (2)

So if political custom was to take care of the people, that custom had to be changed to support the notion that a person should take care of themselves, or risk being lured into the horror of communism.

The fact is that when politics want to bring redemption, they promise too much. When they presume to do God's work, they do not become divine but diabolical.(2)

And this was the theory adhered to at St. Ignatius when Jason Kenney showed up at their door. A divine mission to destroy the welfare state.

This was why libertarians embraced theoconservatism, because both had the same ultimate goal. Then adding the neoconservative doctrine of Leo Strauss, that was bred in Nazi Germany, resulted in the creation of the destructive and inhumane movement, known as the Religious Right, who should have listened to Cardinal Ratzinger when he said that "When they presume to do God's work, they do not become divine but diabolical."

I think diabolical is the best word to describe this new brand of Conservatism.

In 2001, a new administration moved in, attempting to clean up the mess, but not before a generation of Jason Kenneys was unleashed on an unsuspecting public.

Next: Educating Jason Kenney: Between Life and Death

2. RELATIVISM: THE CENTRAL PROBLEM FOR FAITH TODAY, Cardinal Joseph Ratzinger, address during the meeting of the Congregation for the Doctrine of the Faith with the presidents of the Doctrinal Commissions of the Bishops' Conferences of Latin America, held in Guadalajara, Mexico, in May 1996