A Deceptive Democracy. Sandra Buckler and an Act of War

"Whenever, therefore, people are deceived and form opinions wide of the truth, it is clear that the error has slid into their minds through the medium of certain resemblances to that truth." Socrates

On November 4, 2005; Parliament Hill was abuzz with the announcement that Stephen Harper, then leader of the Opposition, was going to speak to a room filled with journalists, MPs and staffers. Mind you in 2005, an announcement that Stephen Harper was going to speak to journalists was not really the news that it is now. In fact we would stand a better chance of seeing Haley's comet two years in a row.

But what made this announcement exciting, was all the election talk during a daily barrage of accusations in the House of Commons about Liberal lobbyists and a culture of entitlement.

... what appears to be a revolving door* that sees people go into government and then leaving, using their contacts to launch lucrative careers lobbying the government they once worked for. (1)

Harper was in his best fighting mode, honed during his presidency of the National Citizens Coalition.

Politics will no longer be a steppingstone for a lucrative career** lobbying government ... Make no mistake. If there are MPs in this room who want to use public office for their own benefit or if there are Hill staffers who dream of making it rich by trying to lobby a future Conservative government, if that's true of you then you better make different plans or leave." (1)

This was the beginning of the launch of his Accountability Act, which would prove to be merely a gimmick, with no intention of ever being implemented. Those in attendance were quick to note that it was full of holes, but not yet aware that the holes were the entire substance of the act.

"The speech was rhetoric," said Conacher ... one area ... is the use of lobbyists in the election campaign. ... A little more than three weeks after Harper warned those looking to cash in to make other plans, [several] Ottawa lobbyists deregistered from lobbying for their impressive list of clients to take a seat in the Conservative war room. "To have lobbyists working inside their war room I don't think it meets the standard that's in the ethics rules..." Conacher said he believes lobbyists working on the election campaign violate existing ethics rules in Ottawa. "The lobbyist code of conduct says you can't put any public office holder in a conflict of interest."

But William Stairs, a spokesman for Harper, said the Tory leader's promise was only meant to crackdown on those who try to profit from being in government. "Mr. Harper's position hasn't changed," he said. "What is wrong is when people go from government to lobbying and they use their position in government or they've joined government in order to gain the experience and contacts necessary to allow them to go into the lobbying business and make all kinds of money. (1)

Another lobbyist preparing for an election at the time was Sandra Buckler, from several mega corporations, including Coca Cola. Buckler would build the framework for the most secretive government that Canada has ever had. 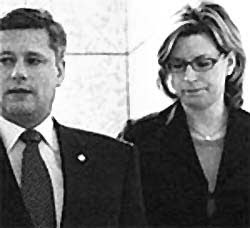 Sandra Buckler and This is War

In the United States, the Bush administration goes to exceptional lengths to control their message. They meet with friendly reporters on Fox News, they give interviews to pet right wing "journalists" at the Washington Times, and at public appearances, the audiences are vetted to ensure that only well-rehearsed softball questions are lobbed at the president. Bush has held fewer press conferences than any president since television first became a major part of political messaging, and when he does hold one, they are tightly scripted. (2)

From the onset it was clear that Stephen Harper was going to follow in George Bush's footsteps and stop freedom of the press in it's tracks. Since Canadians had always been frightened of his agenda, the only way he could forge ahead was to ensure that he could operate without the nuisance of journalists whose duty it is to keep us informed, while chronicling history as it unfolds.

After weeks of trying to gain access to ministers, Sandra Buckler, who replaced William Stairs as Harper's spokesperson, arranged a meeting with the Ottawa Press Gallery. But it did not go well. In fact, it wasn't so much a meeting as the announcement of a decree. Canadians would have no access to their government. End of!

The Parliamentary Press Gallery continues its war with the sparkling new Prime Minister's Office which has clamped down on photo opps, scrums news releases and other forms of the fodder and filler of political coverage. Last Friday, the PPG's executive took a meeting with Prime Minister Stephen Harper's Director of Communications Sandra Buckler to iron out differences. But, from the sound of things, there are many new wrinkles in how the Harperites and the Hacks will interact with each other. Or not interact with each other.

Present were the PPG president Emmanuelle Latraverse, Stephanie Rubec (candidate for the presidency next year), treasurer Isabelle Rodrigue, Terry Guillon Chief of the Press Gallery and John Waterfield Manager of the Press Gallery. Buckler was accompanied by Stéphane Rondeau, Geneviève Desjardins, as well as Christine Csversko.

Here is an excerpt of a note to PPG members from their exec today, which sums up how badly it went. In the course of our short meeting, the PMO indicated that:

· They are considering no longer announcing Cabinet meetings to Canadians ahead of time in order to circumvent the Gallery’s right to post cameras and reporters on the third floor of the Parliament’s Centre Block (as per our understanding with the House);

· They reserve the right not to inform Canadians of the visit of foreign heads of state;

· They will no longer systematically grant access to a pool reporter at photo opportunities between the Prime Ministers and his guests. (3)

Even Time Magazine covered it with suggestions that it "smacks of totalitarianism." (4)

Press Gallery president Emmanuelle Latraverse, ended the meeting after twenty minutes, realizing that nothing was going to change and Harper released his scripted reply.

Prime Minister Stephen Harper says Canadians have no right to know when the federal cabinet is meeting. In an ongoing battle with the parliamentary press gallery over media access, the Conservatives held the first unannounced meeting of the full cabinet in recent memory Tuesday.

... Traditionally, cabinet meetings have been announced in advance, which the House of Commons interprets as an implied invitation to the media to attend. Reporters then gathered outside the cabinet room to buttonhole ministers as they entered or departed. By holding the meetings in secret, Harper has now effectively banned journalists from the floor where cabinet convenes -- allowing ministers to come and go unobserved.

A heavier than usual contingent of Commons security staff patrolled the halls Tuesday morning, barring reporters from areas they had routinely frequented under past governments. "We're going to need hard hats pretty soon," said one guard, rolling his eyes. (5)

Tim from Peace, Order and Good Government, may have said it best at the time:

The Canadian right wing is relatively new to mau-mauing the media compared to their American counterparts, but they are nonetheless keenly taking up the cause. The destruction of public trust in major intuitions - the media, the courts - is an important part of their strategy to become the only purveyors of "the truth". In the U.S., this has allowed the Bush administration to lurch from one lie-induced crisis to another with relatively little difficulty, stabilized by a base of die-hard supporters who only believe what they hear on Fox News or from Rush Limbaugh.

Harper is pursuing the right wing media dream here in Canada, all the better to implement plans he knows the majority of Canadians would find unpalatable. The Conservative Party's loathing of public scrutiny should set off major alarm bells for us all. We've seen Republicans in the U.S. shred the constitution, declare the president above the law, and go to war based on rather transparent lies. With the assistance of a hobbled press corps, Harper could succeed in hiding his "hidden agenda" in plain sight. (6)

"Hiding his 'hidden agenda' in plain sight, is exactly what he has done, and after four years of watching from the sidelines, our media is once again putting up a fight. (7)

Will they succeed? We can only hope. Sandra Buckler was later fired (8), but not for battling the media, but for misfiring a grenade. She is now working as chief of staff fro Peter Van Loan.

*See Lobbyists in, lobbyists out despite Tory promise to stop 'revolving door' by Bruce Cheadle, November 11, 2007

6. Peace, order and good government, eh? Who promised you democracy would be easy? March 28, 2006

7. How to Lift the PM's Muzzle: Under Stephen Harper citizens' right to know has been smothered. Journalists must take a stand. By Helene Buzzetti and Press gallery colleagues, The Tyee, June 11, 2010

8. PM's communications head steps down, By Bruce Campion-Smith and Tonda MacCharles, Toronto Star
Posted by Emily Dee at 6:24 AM