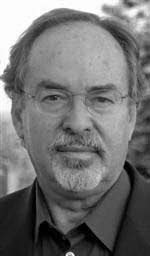 I posted on the Society of Academic Freedoms as one of the groups trying to shift Canadian universities sharply to the right, through questionable activities; many inspired by Morton Blackwell's Leadership Institute and it's Canadian counterpart: The Manning Centre for building Democracy.

These groups are well financed with strong political connections, and most if not all, get at least some of their funding from their U.S. counter parts, as part of this new Religious Right/Neoconservative assault on democracy and Canadian sovereignty."

Which brings me to David Horowitz, the Students for Economic Freedoms and the Center for the Study of Popular Culture (now called The David Horowitz Freedom Center). Rule of thumb, if it has 'Freedom' in the title, avoid it all costs, because they usually have very little concern for the freedom of anyone not white, male, or of a Judea-Christian background.

Yes women are allowed, but only if they know their "place".

Both Horowitz's Students for Academic Freedom and the Canadian version, The Society of Academic Freedoms, belong to a broader group called the The National Association of Scholars, which I'm going to post on separately because their agenda is very troubling. Just to give you a hint this is what SourceWatch has to say: "The National Association of Scholars (N.A.S.) was founded in 1985, was created, according to a report by People for the American Way, " to unite right-wing faculty against 'politically correct' multicultural education and affirmative action policies in college admissions and faculty hiring that take race or gender into account."

And Wikipedia: "The National Association of Scholars (NAS) is a non-profit organization in the United States that opposes multiculturalism and affirmative action and seeks to counter what it considers a "liberal bias" in academia."

I'm also going to present evidence that the notion of a "left-wing" bias is a hoax, and wait until you hear who's behind it. The only man closer to Stephen Harper than George W. Bush. One of the few who still get to call him "Steve". Need more clues? You'll have to wait. (hee, hee) 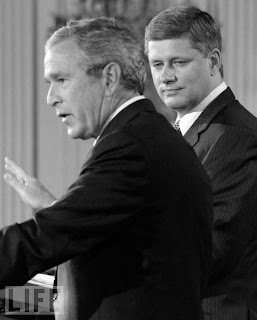 David Horowitz and the Brown Shirts

In the fall of 2002, Joel Kovel, a long-time professor of social studies and internationally renowned lecturer, published an article, which was edited by the absolutely brilliant Rabbi Michael Lerner, (author of The Left Hand of God: Taking Back Our Country from the Religious Right, a must read) in which he pinpointed Zionism as the source of the moral failures manifest in Israel/Palestine. "

Within a few weeks President Botstein summoned him to his office and informed him that his presidential appointment as Alger Hiss professor would be terminated in 2004. Following another Tikkun article a few months later, a college dean, Michele Dominy, suggested at executive vice president Dimitri Papadimitrou's behest that Kovel, then sixty-six years old, should consider retirement. Kovel refused. Subsequently the administration decided to keep him on faculty on a five-year, halftime contract as "distinguished professor," cutting his pay and teaching load by 50 percent while continuing to grant him full benefits. This is the contract the university is refusing to renew when it expires later this year. (1)

On June 8, 2007, Norman Finkelstein, the son of Holocaust survivors who had become an ardent critic of Israel, was denied tenure at DePaul University in Chicago. (2) And:

Fewer people will know the names of four other targets of the Right's attack: Margo Ramlal-Nankoe, William Robinson, Nagesh Rao, and Loretta Capeheart. All four face harassment, threats, or potential removal from their jobs at their universities because they have criticized Israel, defended multiculturalism, and stood up as organized employees in defense of their rights as workers. (3)

After weeks of angry protest ... students ....succeeded in having tall, stoop-shouldered Professor Emil J. Gumbel dropped from the faculty. His crime ... was that he had announced in a lecture: "A turnip is better than a war memorial, than a statue adorned by scantily clad ladies.'' Professor Gumbel heard the news at Cornell last week where he was attending the International Congress of Genetics. He was not surprised. "One doesn't become popular," said he. "by saying that a popular policy will lead a country to catastrophe, especially if events have shown it to be true. There is no question that I am a pacifist. The War made me that. And I am an antiFascist. I am in favor of the republic and peace and the welfare of the working class." (4)

The last quotation is from Time magazine, dated September 5, 1932, and is discussing the Brown Shirt, Nazi Party initiative, and just the beginning of their purge of "liberal" academia. They were still weeks away from power, but were powerful all the same.

January 30 1933: Albert Einstein visits the United States. He reacts to Hitler's ascension to power by calling it a ”psychic illness of the masses" and never returns to German soil. He is subsequently dismissed from his position at the Kaiser Wilhelm Society, expelled from the Prussian Academy of Sciences, and stripped of his citizenship.

March 23 1933: Interior Minister Wilhelm Frick submits to the cabinet a new law that would exclude non-Aryans from the civil service, including university professors. The law is passed in final form on April 7th 1933.

April 1933: The local Nazi newspaper in Freiburg publishes a list of Jewish members of the university medical faculty. The head of psychiatry provided the list.

April 13 1933: The National Socialist Student Association affixes the ”twelve theses" to university buildings and billboards throughout Germany. The theses denounce Jews, Marxism, pacifism, Freudian psychology, and more. Thesis 7 reads, ”When the Jew writes in German, he lies. He should be compelled, from now on, to indicate on books he wishes to publish in German: "translated from the Hebrew. (5)

David Horowitz wrote a book The 101 Most Dangerous Academics in America which has served as a "list" of university professors who must be purged from Academia. His counterpart in Canada, The Society of Academic Freedom, loves the book and promotes it in their newsletter (scroll to page 13).

The "list" has been horrible for anyone who made it, including Caroline Higgins:

Caroline Higgins is 66 years old, and at 5’2” she’s not a daunting figure. Walking on the Earlham College campus last week, she ran into one of her students, a football player who very much towers over her. She mentioned that she was about to be named to a list of the “101 most dangerous academics in America.” Higgins said that her student just started laughing -- and that for anyone who knows her, “dangerous” just isn’t the word that comes to mind. (6)

But do you know why she made "The List"? Because she teaches Peace. Dangerous because she promotes Peace. Do you see the pattern here? Anyone suggesting a peaceful solution to the Israeli-Palestinian conflict are now "dangerous", but those promoting a nuclear holocaust in the Middle East, are "safe".

Retired university professor Michael Yates has written extensively on the topic and says that he's glad he quit: "At least I did not have to face the nasty right-wing students who spy on their professors and do the bidding of the professional witch hunters who spew hatred on radio talk shows, and television programs."

And just as we didn't realize that the American Religious Right had become such a force in Canada, until Marci McDonald's The Armageddon Factor, this attack on universities is largely being ignored too. I'm exposing as much as I can and identifying who's providing the money. I think I'll make my own list: The 101 Most Dangerous People Who Pull Stephen Harper's Strings in Canada. Catchy, don't you think?

Several "independent studies" were conducted by CSPC (David Horowitz's Center for the Study of Popular Culture ) .... One of the first studies was conducted by Frank Luntz, Republican pollster and compatriot of Newt Gingrich during the 1994 election engineering. As reported by George Mason University's website, Luntz's survey came into serious question when it was found that "Luntz polled only liberal arts faculties and administrators. And even within the liberal arts, only 12 percent of the respondents were from the more conservative business and economics faculties".... the funding of the experiments Horowitz cites as well as the scientific methods of research used draw each into question. The latest study, published in late April 2005, was funded by the Randolph Foundation, supporter of the Independent Women's Forum, Americans for Tax Reform, and CSPC. (SourceWatch)

Do you remember Frank Luntz, the Republican Party trickster who told Harper that the best way to get a majority was to pretend to have an accountability act, natter constantly about lowering taxes and tap into national symbols like Hockey? (7). Frankie still calls him "Steve" and they go waaaaaaaaaaaaaaay back. I think they popped their first zit together.

5. Features of The Role of Academia In Nazi Germany During and After Heidegger's Rectorship of Frieburg University, The Philospopher of Nazism

7. Kick the Liberals as they're down: Prime Minister Stephen Harper's government should do its best over the coming year to dig up embarrassing information on the former Liberal administration and portray it as corrupt, a prominent Republican pollster counselled an influential group of Conservatives yesterday, The Ottawa Citizen, May 7, 2006