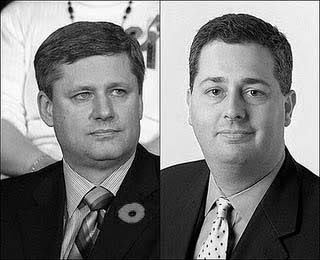 Think of the press as a great keyboard on which the government can play.” Joseph Goebbels

I'm still amazed that after more than four years, the media will still begin a story on the Harper government's unprecedented secrecy and control, with the notion that he came to power on a promise of accountability and an open government.

I agree that he came to power on that promise. But anyone who believes that there was ever any intention of it ever being more than a promise, obviously doesn't understand Stephen Harper at all. And anyone in the media still believing that he was sincere, have clearly chosen the wrong profession.

Soon after winning his seat in Calgary West in 2006, and as party leader being given an opportunity in a "first past the post" system, to act as Prime Minister; Stephen Harper put up a "quiet" sign. Everyone from his elected caucus to public servants were told to "shush". This prompted the media, not only in Canada, but elsewhere; to sound the alarm.

In April of 2006, Time magazine published an article: Controlling the Message, discussing the enormous lengths that our government was going to, just to avoid talking to the press, whose very jobs are supposed to be the antithesis of "shush."

"Canadians should be worried when they see the government trying to exert such an unprecedented level of control."

Yes we should have been worried. And despite the fact that the situation has only worsened, meaning we now have more to worry about, we are still not screaming from the roof tops. Why is that?

The master manipulator who led former Ontario Premier Mike Harris through seven years of the most incompetent, corrupt, authoritarian and damaging administrations the province had ever seen. I still have nightmares.

In 2000, Ryerson Press wrote a lengthy article about Harris's control of the media.

TV newsmakers need vivid images to illustrate their stories. Harris's Tories, easily the most communications-savvy provincial government this country has ever seen, are delighted to oblige — on their terms. They dodge negative coverage at every chance and will go to ridiculous lengths — giving preferential treatment to friendly reporters, shutting out critical ones and staging elaborate, unrelated events — to avoid it.

That was pure Giorno.

So when Stephen Harper decided to hire him in May of 2008, I knew that it wasn't to improve relations with the media, as indicated by the PMO; but to create ways to manipulate them. They became his keyboard.

This man who performs his duties in the shadows, would create an enigma. The illusion of a prime minister, who would not have to assume the role of a moderate leader, but simply be given the tools to play one for the camera. And as crazy as it sounds, it worked.

But he also endorsed something else far more important to the future success of a man who has made a religion out of avoiding us. The art of deception.

“If you tell a lie big enough and keep repeating it, people will eventually come to believe it. The lie can be maintained only for such time as the State can shield the people from the political, economic and/or military consequences of the lie. It thus becomes vitally important for the State to use all of its powers to repress dissent, for the truth is the mortal enemy of the lie, and thus by extension, the truth is the greatest enemy of the State.” Joseph Goebbels

After the 2008 election, when the Reform-Conservatives were returned to power, rather than creating an economic update, that would include initiatives to steer us through the recession, they went on the attack. They waged war against women, unions and the opposition.

The opposition parties formed a coalition government, fully prepared with a budget and a plan. Giorno didn't see this one coming, though members of Harper's caucus did. " Just call him Fall-Guy Giorno.

As aghast Conservative party insiders watch their government teeter on the brink of defeat, Guy Giorno, Prime Minister Stephen Harper's chief of staff, is, fairly or unfairly, coming in for a share of the blame for the ideologically driven gambit that could cost the Conservatives government.

"This has Guy's fingerprints all over it," said one senior Conservative, in reference to the explosive measure to strip political parties of their public funding that was contained in Finance Minister Jim Flaherty's economic statement Thursday.

And yet despite the fact that this coalition was only different from Stephen Harper's 2004 attempt, in that it didn't include the Bloc as part of the actual coalition, what happened?

They told a "lie big enough" and "kept repeating it", until eventually people came to believe it. Over and over they hammered a simple message with a few key words. "Traitors", "coup", "unconstitutional". And even though we sensed that somehow it wasn't right, it won the day. The coalition, with the help of a well tuned "keyboard", was forced to back down.

The same is happening with the Afghan detainee issue. They never go off message. "Our brave soldiers" .... "Our troops are above reproach" ... "there is no evidence" ..."the opposition" has accused "our" troops of "war crimes".

Even the prorogation, that apparently was engineered by Giorno to eliminate the opposition from any future plans, was handled with "big lies" repeated over and over and over and over again. "Routine" "Chretien did it four times" "focus on the economy". Bang, bang, bang.

"It doesn't have to be true, it just has to be plausible." Tom Flanagan

Well this week Girono has had to come out of hiding, sort of, to explain the government's increasing control of information, after a report by information commissioner, Suzanne Legault, who "fears Canadians' right to know is on the verge of being 'totally obliterated'."

When the mystery man had to speak, which was mostly just answering prepared questions from what Don Martin referred to as the "Hallelujah Chorus", he kept repeating the same thing, that his government is "committed to freedom of public information".

And when the laughter died down, he really let loose with a zinger that would have the infamous Nazi propagandist, Joseph Goebbel rolling (with laughter and pride) in his grave. "Information is the oxygen of democracy."

It's unfortunate that he didn't finish that quote as presented by Nobel-Prize winning Amartya Sen:

"Information is the oxygen of democracy. If people do not know what is happening in their society, if the actions of those who rule them are hidden, then they cannot take a meaningful part in the affairs of that society. But information is not just a necessity for people – it is an essential part of good government. Bad government needs secrecy to survive. It allows inefficiency, wastefulness and corruption to thrive .... Information allows people to scrutinise the actions of a government and is the basis for proper, informed debate of those actions."

Clearly too many words for the lie to be believable.

So please join Canadians Rallying to Unseat Stephen Harper, because Canadians need oxygen and Guy Giorno needs a real job.
Posted by Emily Dee at 6:55 AM