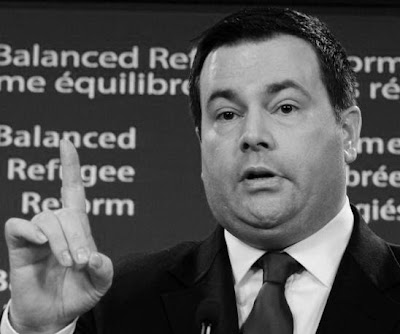 When I read Marci McDonald's Armageddon Factor, I was surprised that she didn't have more on Jason Kenney. Her book was excellent and connected a lot of dots for me, but Kenny is just as involved with the Religious Right as Stockwell Day. In fact, maybe more so, especially to the American movement. And his beliefs are also just as troubling.

However, while researching another story I came across an old article from Australia, that directly ties the Reform Party and the Republican Party, and in a way that we all missed. I had already written about the close relationship between Preston Manning and Newt Gingrich, but this goes further and deeper, and involves Jason Kenney in a very big way.

I should have seen this before, but I had my light bulb moment this afternoon. So I went over all of my notes and skimmed some old postings, and it was all there. So I'm going to try and put everything in chronological order as best I can. I may have to do it in two or three parts. But it involves the Canadian Taxpayers Federation, the Christian Coalition and Grover Norquist. A strange combination indeed.

About 1987 Jason Kenney leaves St. Ignatius at the University of San Francisco, where he was schooled in far right, neoconservatism. He gains temporary employment with a Saskatchewan MPP, from his hometown of Wilcox, where his father ran a Catholic college.

In 1989, Brian Mulroney began discussing the implementation of the GST, which became a very hot button issue with Canadians. This prompted Saskatchewan resident, Kevin Avram, to start a kind of grass roots organization, to mobilize people against this new tax. (1)

So he attended a conference in Austin, Texas where he met a representative of the “Association of Concerned Taxpayers” which was then headed up by Grover Norquist. So he decided to set up a chapter in Canada, which he simply named the Association of Saskatchewan Taxpayers, which was incorporated on May 1, 1989. Jason Kenney was hired as Executive Director.

Meanwhile, a similar group had started in Alberta called Resolution One. I'm still hunting down information on them, but they may have been connected to Link Byfield. Though not a member of the Reform Party himself (his father Ted was a founding member), he drafted "Resolution One" for Preston Manning, which became the Reform Party's fiscal philosophy. (2)

Link was a founding member, along with Stephen Harper, of the Northern Foundation and is currently involved with the Wildrose Alliance Party. Resolution One became the Alberta Taxpayers Association and they joined with the Association of Saskatchewan Taxpayers to become the Canadian Taxpayers Federation, and Jason Kenney was named CEO. Rob Anders also claims to have been involved with them at some time as well, according to his resume, when he first ran for public office.

I have a bit more information on the American Association of Concerned Taxpayers, as it relates to Stockwell Day (when he had big hair. Oye!), but I just wanted to follow along with Jason Kenney and Grover Norquist for now.

Norquist had worked for Ronald Reagan, setting up Americans for Tax Reform, as a "think-tank" to sell his tax cutting measures. It was such a success that he kept it going, with branches and affiliates right across the country, including AOCT, on which CTF was fashioned.

In 1988, Norquist was asked to work on the campaign of George H. Bush, and he advised him to stick to one simple message. It was the message that he had adopted for his own anti-tax outfits. Remember the famous "Read My Lips"? That was Grover Norquist.

Well Jason Kenney did all but tell people to read his lips, though Stephen Harper tried it out in 2008. But in 1995 when Kenney was touring Canada, he must have felt the invisible hand of Norquist brushing against his cheek.

"Before the 1995 Budget was brought down .... the CTF sponsored no fewer than eighteen protest rallies across the country whose theme was 'No New Taxes.' These rallies were also deliberately coordinated with others sponsored by the Reform Party and the National Citizens Coalition for maximum affect. "... any casual observer of the CTF's literature cannot fail to note the groups neo-conservative approach to the role of government in general. As well-known tax expert Neil Brooks has stated, the CTF's 'anti-tax rhetoric disguises a view that government should play a minimal role' ... David Perry of the Canadian Tax
Foundation ... notes that much of the group's anti-tax sentiment is based on ignorance of the actual situation in Canada .... a perception of reality, rather
than reality' .... "Many other tax experts ... have also pointed out that the benefits received from government in exchange for taxes have to be taken into account ... Kenney's response to this, however is instructive. 'We only look at taxes, not benefits'.. (3)

And in the same way that Americans for Tax Reform originally propped up Ronald Reagan, it was pretty clear that the CTF were doing the same thing for the Reform Party.

Public-Service union president Darryl Bean has called the CTF 'a front for the Reform Party,' and it is not difficult to understand the source of his accusations. Preston Manning has often been asked to address its anti-tax rallies. At one such event in Pickering Ontario in 1995, media accounts routinely reported some 3,500 Reform Party supporters in attendance, and Manning received a standing ovation. "... (3)

Now this was 1995, and in the fall of that year, Jason Kenney, along with dozens of Canadian conservative Christians thronged to Washington, DC, to attend a major convention of the U.S. Christian Coalition, (4) then headed up by Ralph Reed.

When Robertson's campaign flamed out, political analysts served up a new round of obituaries for the religious right, but once again, the reports of its death proved premature. Even as Robertson nursed a wounded ego, he was hatching his organizational revenge, hiring a fresh-faced young doctoral student named Ralph Reed to build a grass-roots evangelical network, focusing first on the takeover of school boards and town councils before ultimately commandeering the machinery of the Republican National Committee itself. That institutional coup took place almost entirely beneath the media's radar, and by the time it finally caught their attention, Reed's Christian Coalition controlled both houses of Congress and would later play a major role in putting George W. Bush in the White House, not once but twice. (5)

Jason Kenney and his gang came back to Canada with a new agenda. They were going to replicate the success of the Christian Coalition on home turf. In McDonald's book, Armageddon Factor, she states that this initiative was the brainchild of Roy Beyer and Brian Rushfeldt, but Jason kenney was involved in this as well.

... Even more ominous for democratic rights in [British Columbia] is the recent hatching of the B.C. clone of Pat Robertson's Christian Coalition. With 1.7 million active members and a $25 million (US) annual budget, the U.S. organization has become a formidable lobbying force in American politics, installing its anti-choice, anti-gay agenda and candidates at all levels of government, from school boards to Congress. The B.C. chapter is headed up by Operation Rescue activist Don Spratt, and claims among its founding board members former B.C. Premier and ardent anti-choicer Bill Vander Zalm ... "Advisors" to the new CCC reportedly include Ted and Link Byfield (owners of the ultra-conservative B.C. Report and Alberta Report magazines), Jason Kenny (head of the Canadian Taxpayers Association), and Alex Parachin (head of the Christian Broadcasting Associates in Toronto, the Canadian branch plant of Pat Robertson's Christian Broadcasting Network). (4)

I'm going to leave it there for now. Most of what I have written here has been covered in other posts, but it's what happens next that is rather surprising, so I want to cover it separately. This just sets the stage.

The media missed this in the U.S. "and by the time it finally caught their attention, Reed's Christian Coalition controlled both houses of Congress" (5) ... this was missed in Canada as well, though one diligent reporter did try to sound the alarm.

While Don Spratt may be telling readers "Nobody has anything to fear from the Christian Coalition," progressive activists and journalists will have to make sure the electorate knows better. (4)

And yet they didn't.

4. The Christian Coalition Comes to Canada, by Kim Goldberg, The Albion Monitor, May 5, 1996