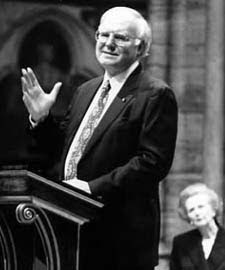 The American Enterprise Institute is one of a myriad of think tanks that have become part of the infrastructure of the neoconservative/Religious Right movement.

One of the oldest, it was established in 1943, as a spokesperson for big business. Ronald Reagan once stated:

However, the fortunes of the AEI have fluctuated depending on who was in power, enjoying their greatest success under the Bush administration. George Bush pulled 20 staffers from AEI, including David Frum, the person who organized the Winds of Change, dedicated to uniting the right, and is now a voice in our own neoconservative government.

Frum was recently fired from the AEI for speaking out against the Republican Party, clearing showing just how "non-partisan" the group is. (2)

But AEI's ties to Canada go back further than Frum. They even influenced the Saskatchewan government of Grant Devine:

The new right's attack on the welfare state included a moral component contributed by the new Christian right, which claims to find sanction for private enterprise economics in the Bible. A good example of this approach comes from Michael Novak of the American Enterprise Institute: "I advise intelligent, ambitious, and morally serious young Christians and Jews to awaken to the growing dangers of statism. They will better save their souls and serve the
cause of the Kingdom of God all around the world by restoring the liberty and power of the private sector than by working for the state."' The private sector
would not only make you rich, it would save your soul.

Believing as it does that the Bible endorses individual self-reliance, the new right asserts that the solution to society's problems — whether economic or social — is fundamentally moral. (3)

Michael Novak has also spoken at the Fraser Institute and according to Lloyd Mackey has influenced the thinking of Stephen Harper. (4)

Those belonging to the group definitely represent the far-right, including Dick Cheney, his wife Lynn Cheney, William Kristol and Richard Perle.

But what's important and something we need to take note of in Canada is that recently the AEI has begun to attack NGOs.

In June 2003, AEI and another right-wing group, the Federalist Society for Law and Public Policy Studies, launched a new website NGOWatch.org/NGOwatch.org
to expose the funding, operations and agendas of international NGOs, and particularly their alleged efforts to constrain U.S. freedom of action in international affairs and influence the behavior of corporations abroad. AEI states that "The extraordinary growth of advocacy NGOs in liberal democracies has the potential to undermine the sovereignty of constitutional democracies, as well as the effectiveness of credible NGOs." Ralph Nader responds with "What they are condemning, with vague, ironic regulatory nostrums proposed against dissenting citizen groups, is democracy itself." (1)

According to Muzzle Watch: "However, a more straightforward description of their ideological bias comes from liberal Jewish thinker Leonard Fein who says: "NGO Monitor, is an organization that believes that the best way to defend Israel is to condemn anyone who criticizes it." (5)

Next: Jason Kenney and the NGO Monitor on a Rampage to Destroy Humanitarian Organizations