The Validating of Hatred by the Conservative Movement

I have been writing a lot about the resurgence of hate groups, that have now attached themselves to anti-tax, anti-immigration and some of the more extreme Religious Right organizations. They are now moving from the fringes and using these organizations as a bridge to the mainstream.

The above is part one* of the documentary White Power USA: The Rise of Right-Wing Militia in America, and validates what I have been saying. And if you think we're immune you're dead wrong. I'm not suggesting a militia but we will be attacked. And Harper's Fox News North, launched by his ex communications director, Kory Teneycke, is where the battle will begin. They just have to overturn our hate crime laws, but they're getting closer all the time.

However, it actually started sooner than that. The Reformers have been quietly moving Canada to the right. Not in our thinking. Canadians are still Canadians. But the perception of Canada by other nations, is diminishing. They now see us as just another Bush administration.

Earlier this month, Habtom Kibraeb, an Eritrean refugee, committed suicide in Halifax from fear of a pending deportation. In December 2008, a 24-year-old woman was deported to Mexico, where she was murdered months later. She had applied for asylum in Canada twice. This tragedy occurred while Kenny was imposing visa requirements on Mexicans, claiming they were bogus. (1)

The above video mentions J.T. Ready, a Republican candidate who is heading up a movement to stop illegal immigration from Mexico. He has support from some pretty high places, including the Republican Party. One of them is Arizona State Senator Russell Pearce. He was responsible for drafting the controversial Proposition 200, which makes it a crime for public officials to fail to report people unable to produce documentation of citizenship when applying for benefits, and allows citizens who believe that public officials have given undocumented persons benefits to sue for remedies.

Since Proposition 200 passed last fall, its backers have presented an alarming 20 bills targeting immigrants in the Arizona legislature, have cheered the vigilante Minuteman Project on the Arizona-Mexico border, and have worked to sponsor similar bills in other states. But there is a growing grassroots mobilization against the resurgence of racist policies in Arizona, and the threat of an international and national boycott of the state looms. (2)

And yet it is gaining momentum and has sparked a new group: Protect America NOW! 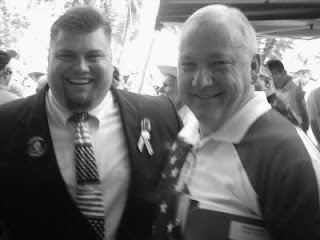 J. T. lost the election but his Minutemen are still on the March and have the full endorsement of the Republican Senator Pearce. You can see them together in the photo to the right.

Just three weeks ago at a tea party rally in Tempe, he handed out fliers calling for landmines to be placed along the Mexican border to prevent illegal immigrants from crossing into Arizona.

Now, neo-Nazi J.T. Ready says he plans to lead an armed group into the desert south of Phoenix this weekend to put a stop to what he called “narco-terrorists.” Ready appeared decked out in camouflage during an interview Wednesday with KPNX (Channel 12). He showed off a stockpile of guns and ammunition he plans to take with him and claimed his group will stake out an area of Pinal County that drug smugglers use as a route to bring “chemical warfare into Phoenix.”Ready has grabbed more traction with local media in recent months as the debate over illegal immigration heats up. He has also appeared frequently at rallies and protests in support of Arizona’s new immigration law, hoping to attract supporters to his cause.

That was no different on May 29 at the “Stand With Arizona” rally in Tempe, an event organized by several tea party groups. Ready was there handing out fliers for the Mesa chapter of the National Socialist Movement, the largest neo-Nazi group in the United States. (3)

And left unchecked the worst may have already happened.

One man was injured with a gunshot wound to the left forearm, the rest were unharmed. The shooting occurred around 5 a.m. on Friday, June 11 at Peck Canyon, nearby Rio Rico. Sheriff Estrada suggested in the KVOA report that the shooters could have been U.S. citizens “hunting illegal border crossers.” What the piece didn’t explain is whether the victims of the attack had been able to identify the perps as Anglo or Hispanic. But Sheriff Estrada told me that the migrants couldn’t say. (4)

In addition to shootings of Latinos by Border Patrol agents, there have been mysterious shootings and even murders in Arizona deserts. Troubling details are emerging that suggest these attacks on Latinos are not drug-related, as often reported, but the work of violent border vigilantes. (5)

These actions have been inspired by the new racist policies of the Republicans. Grover Norquist gave Russell Pearce an award for his no-tax rhetoric. The Tea Party group is an extension of the Republican party and Fox News, who have now validated hate.

Will Fox News North promote the same things? I'm sure the Republicans never expected this outcome. Remember, this is not your father's Conservative Party.

"This is a problem in Canadian refugee law which encourages bogus claims." -- Prime Minister Stephen Harper

While apologizing to the president of Mexico, Prime Minister Harper has echoed what his immigration minister, Jason Kenney, has been saying for some time. Canada's refugee system is overwhelmed with bogus refugees who come to take advantage of a generous asylum system. These bogus refugees are queue jumpers who are sneaking into Canada through the asylum system. And nobody likes a queue- jumper, least of all Canadians.

... Kenney is quite clear about who a bogus claimant is: anyone who is a failed refugee claimant. He cites Mexican claims as the example. Eighty-nine per cent were rejected in 2008. He has said they are all queue jumpers, economic migrants who are abusing the refugee system. But are they?

With the minister's indulgence, I would define a bogus claimant as one who makes a false refugee claim knowing that he or she is not a refugee. That definition would undoubtedly cover some Mexican claimants who come to Canada with a phoney story about horrible events that never happened. It would even cover the Mexican migrant who has naively been misled by an unscrupulous travel agency to simply arrive in Canada. It would not, however, describe many of the failed Mexican claims ... When Kenney says that he does not believe that Czech Roma or Mexicans are refugees, and therefore they are presumably bogus refugees, he is contradicting both the IRB and the Federal Court which have both said that some Czechs and some Mexicans are refugees who are at risk of serious harm. (6)

We're just a few tea parties away from a J.T. Ready. Or are we?

Minister of Citizenship, Immigration and Multiculturalism Jason Kenney is known as the Minister of Censorship and Deportation because of his record as one of the most repressive immigration ministers in Canadian history. Deportations have increased, while the number of people accepted as refugees and sponsored family members have drastically dropped. Instead, Kenney has increased the number of temporary workers who are constantly exploited for their labour. His new refugee bill creates a racist two tier system based on nationality, and he has called a wide range of migrants– from Mexicans to the War Resisters – “bogus”. Under his regime, an Eritrean refugee committed suicide from fear of a pending deportation, and a young woman was murdered upon her deportation to Mexico. (7)

*You'll see Amy Goodman from Democracy Now on this video. She was the journalist who was detained in Canada and had her car searched because they were afraid of what she may be here speaking about. Ironically, it was freedom of the press.

1. Community Group Outraged at Kenney’s Proposed Refugee Reform, By No One Is Illegal-Vancouver, March 30th, 2010

6. Bogus claims made about bogus refugees, By Peter Showler, The Vancouver Sun, August 18, 2009