From John Birch to the Tea Parties. The Far-Rightists Have Made a Comeback 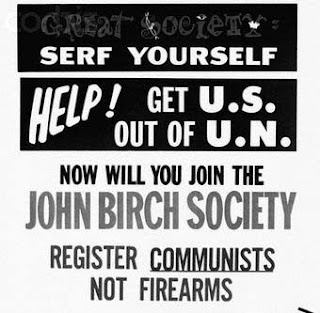 I mentioned in relation to the Council for National Policy, how one of the founders was Nelson Bunker Hunt, who is now also running the John Birch Society.

I wanted to introduce him for several reasons, but mainly to show the connections to past far-right organizations that have now embedded themselves in the Republican/Conservative parties.

Another founder of the Council for National Policy is Morton Blackwell (1), the man who is behind the Leadership Institute. Preston Manning's Manning Centre for Building Democracy, runs a youth program fashioned after that of the Leadership Institute, which trains young Republicans/Conservatives in political activism, and that horrendous activism is now playing out on university campuses in Canada.

I have a lot more on that to share, but for now I just wanted to make some comparisons to the activities of the John Birch Society and what is happening in the U.S. with the ridiculous Tea Party movement. They have not created a new phenomenon, but simply revised the 1960's Bircher movement, complete with it's rampant racism.

In 1961, Time Magazine published a lengthy expose on the John Birch Society and other similar, that were creating havoc in the country, which brings the whole teabagger's notion of "Obama is a Socialist" nonsense into context.

An attractive Dallas housewife sees little of her neighbors these days. "I just don't have time for anything," says Mrs. Bert Shipp. "I'm fighting Communism three nights a week." In Hollywood Hills. TV Commercial Producer Marvin Bryan spends his spare time working for the local Freedom Club, which is dedicated to opposing "compromisers" in local and national government and to smoking out liberals in the community. Says Bryan: "We don't want to coexist with these people. We don't want our children to play with their children." At a Freedom Forum meeting in Greenwich, Conn., 800 citizens recently paid $5 apiece to sit through a day of patriotic films, speeches on dialectical materialism and attacks on the U.S. State Department, federal income tax, philanthropic foundations and Harvard University. Questions to speakers were written out, explained Mrs. Charles Chapin, one of the meeting's sponsors, in order to screen those coming from Communists who might be in the audience. (2)

At the latest Tea Party rally, and indeed at all of them, they said this of Obama:

"His mother was a Communist. His father was a Communist. His grandparents were socialists. He had Marxist professors. He taught a course in college on Saul Alinsky. He was friends with William Ayers." According to Jackson, another clue that Obama is a Leninist is that he used the phrase "spread the wealth" in his conversation with Joe the Plumber. "That is a direct quote from the Communist Manifesto," she insisted." Except that, in reality, it is not, although 1930s populist Huey Long did promise to "share the wealth." (3)

Robert Welch, the founder of the John Birch Society, lost credibility when he called Eisenhower a Communist. Now this seems to be quite acceptable. 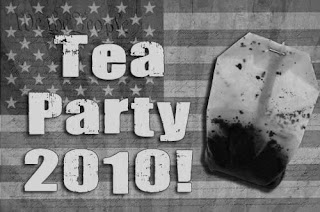 These are only a few of the manifestations of a U.S. phenomenon: the resurgence of ultraconservative antiCommunism. Hundreds of groups and subgroups—with such names as Project Alert, Americans for Constitutional Action, Survival U.S.A. and Crusade for American ism—have popped up across the U.S., in some cases springing from nothing to several thousand members almost overnight. More than 100 anti-Communist study groups are being conducted in Dallas alone. Because their membership is sometimes secret and usually heavily interchangeable with other groups, no sure estimate of their strength is possible.

The far-rightists intend to figure in as many congressional campaigns as possible
next year. California's Representative John Rousselot, a member of the John Birch Society, is talking of running for the Senate in the 1962 G.O.P. primary against Incumbent Thomas Kuchel. Arkansas Congressman Dale Alford has already begun to use far-right material in a buildup against Senator J. William Fulbright. Says Indiana's Clarence Manion onetime dean of Notre Dame Law School and a veteran anti-Communist lecturer and writer, who claims to have 350 Conservative Clubs in operation: "I've never seen anything like this. As one who has faced a great many empty seats in recent years. I'd say the whole atmosphere has changed in recent months." No Room in the Middle .... (2)

McCarthyism is definitely making a comeback, and just as in 1961, there is no room in the middle. The Conservative movement has gone to the far-right.

The John Birch Society is now one of the sponsors of the Conservative Political Action Conference, showing that we have come full circle. Do we really want to return to those days?

The rightists rally citizens to their banner in many cases by stressing a belief in nondenominational Christianity as part of their platform. "This war we're in," says South Carolina's Senator Strom Thur mond, "is basically a fight between the believers in a Supreme Being and the atheists." Thus, the rightists' two principal poles of attraction, anti-Communism and religion, are impeccable—and subject to a good deal of emotionalism. But the ultras do not stop there.

... In everything that he finds displeasing in modern society and political life, the ultra sees evidence of Communist plots and subversion. With a dogmatic either-or attitude, he broaches no disagreement. "You're either for us or against us," says James E. Gibson, senior vice president of California's Leach Corp., which makes electronic components. "There's no room in the middle any more." And the ultra, dissatisfied with the current political order, usually works outside normal political channels (2)

You're either with us or against us. Where have we heard that before? "Taliban" Jack Layton can attest to what that feels like.