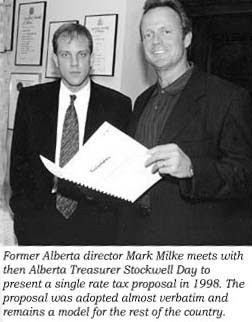 The image to the left is of Stockwell Day, two years before he and Jason Kenney decided they would like to make him prime minister, to push a new constitution based on the Old Testament.

It is taken at the Canadian Taxpayers Federation, the group Jason Kenney left when he decided to run for the Reform Party, to help carry out the mandate of the Canadian Christian Coalition, and infiltrate all levels of government.

Mark Milke took his job but is now with the Frontier Centre, another prop for the Harper government. 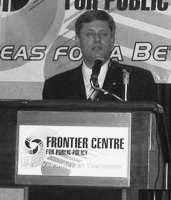 These guys move in and out of these so called "non-partisan", "non-profit" backdrops so often, that they are never quite sure who will be giving them a pay cheque in any given week. Could be the Fraser Institute. Could be the Frontier Centre. Could be the Canadian Taxpayer Federation. Or it could even be Stephen Harper, which means us.

But back to the flat tax.

You can't read a bloody bio of Stockwell Day without someone singing his praises over coming up with this wonderful system of taxation. But if you read the caption under the photo upper right, it states. "Marke Milke meets with then Alberta Treasurer Stockwell Day to present a single rate tax proposal ... The proposal was adopted almost verbatim."

Not his. But is it Milke's? Nope. Not his either.

We have to go back to the history of the Canadian Taxpayers Federation.

It was the brainchild of Kevin Avram, after attending a conference in Austin, Texas where he met a representative of the “Association of Concerned Taxpayers” which was then headed up by Grover Norquist. The association was "established to promote a flat income tax..." And if you want to know who benefits by it, they get a lot of their funding from Exxon.

In 2005, Milkes wrote an article on the flat tax, something he's still flogging. In it he mentions:

Think back 20 years. Any suggestion that eastern and central Europe were desirable economic models came only from Western socialists, university professors and others with an eternal grudge against free markets. What a difference perestroika, McDonald's in Moscow, the fall of the Berlin Wall, and the collapse of the Warsaw Pact makes. "New Europe" moved on, saw the future, and decided not to include in it tax regimes that punish wealth creation. The region is now something of a darling for tax reformers.

In January, Romania scrapped its multiple-bracket system with marginal rates as high as 40% for a single 16% tax rate on personal and business income. Romania, once home to one of the most repressive communist regimes, was country number nine to jump on the flat-tax express. Existing riders include Estonia (first, in 1994), and Georgia (also in January), Latvia, Lithuania (wages and salaries only), Russia, Serbia, Slovakia, and Ukraine. But it's not just Europe. Alberta added itself to this list when it switched to a single rate of provincial income tax in 2001. (1)

Over the last decade, Eastern European countries became darlings of the far right by instituting free-market economic policies designed to break convincingly from their Communist past. The so-called Baltic Tigers—Latvia, Lithuania, and Estonia—garnered worldwide plaudits for a number of free-market reforms, led by the imposition of a flat-rate income tax, especially from the American right. "The flat tax is making a comeback," trumpeted the conservative National Review. The three nations are "leading a global tax reform revolution," said the right-leaning Heritage Foundation.

... Too bad for them that it hasn't worked out. Latvia, which has a flat tax of 25 percent, and Lithuania and Estonia, which have 21 percent tax rates, are all in deep economic trouble. They all have huge government budget deficits, a sign that they took in too little in tax revenue to cover their costs, primarily state expenditures to provide a generous welfare state. Conservatives might argue that they didn't slash welfare benefits enough, but there is no dispute that the flat tax didn't provide the expected revenue. (2)

That's why the neocons love this system, because it gives them an excuse to "slash welfare benefits" .... again. And I don't mean corporate welfare ... bite your tongue (or a neocon will do it for you). Just the country's most vulnerable.

And if you still think there's a very slim chance that it might work, the tea baggers have added it to their battle cry.

So the biggest dream of any of these nut job Tea Party folks is a flat tax, of about 15%. That's the number I see most often as being a "fair" tax. So this idea is that everyone, no matter what they make (except those below the poverty line I assume) pays x% for my purposes I will use 15%.

... But where this "brilliant" idea falls flat on it's face is when you realize what is left over and what can be afforded with it. It turns out that this "fair and flat" tax actually turns out to be regressive, not in that it puts the burden of funding the government on the poor but those hurt most by it, are the lower income. So poor people have less money then wealthy people, this is obvious. Though they are not rich, they still have to live: buy food, pay for electricity and phone, pay for medical bills, and yes taxes.

Because these less fortunate people make less money, a greater percentage of there income goes towards those necessities. So what this means is that if the poor are paying the same as the rich, the hit being taken by them is still much greater then it is for the wealthy .. Now I know, these people are entitled to their wealth they worked hard... BLAH BLAH BLAH. But lets remember here so did the poor man, and yet they are the ones who suffer from taxes. The rich are the ones who most complain about taxes and yet many of them do not even pay. They shelter it in Swiss and Cayman bank accounts. (3)

The flat tax is a bad idea. But even if it were a good idea, the next time someone credits Stockwell Day with this initiative, set them straight. Or do what I do and scream.

2. The Flat Tax Is Flat-Lining: The meltdown of Baltic countries shows what a bad idea this gimmick always was, By Charles P. Wallace, The Big Money, March 31, 2009