We Are at War and We Must Mobilize Our Allies 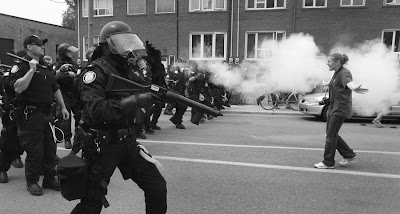 Although many Canadians don't yet realize it, we are at war; a worldwide class war of capital versus everyone else, a war which the bubble of the Keynesian welfare state temporarily obscured. In this war, the Right has daunting weapons. Over the past 20 years, capital has forged a unified coalition of business, politics, and fundamentalist religion. It owns most of the national and local media ... And through speculative manipulations, they have the power to disrupt the entire Canadian economy. As a result, they wield enormous influence over all levels of government and public opinion. The Right speaks with almost one voice and its vision is insinuating itself into the popular consensus. (1)

Our enemy is Neoconservatism.

And now that we've been able to define that, we need to mobilize our allies, if we have any hope at all of restoring our democracy: "Because the success of the Right comes through carefully managing public opinion, the starting point for defeating the Right is through creating a well-informed public." (1)

Breaking Down the Conservative Myth

In 2004 Philip Agre wrote a paper: What Is Conservatism and What Is Wrong with It?

Liberals in the United States have been losing political debates to conservatives for a quarter century. In order to start winning again, liberals must answer two simple questions: what is conservatism, and what is wrong with it? As it happens, the answers to these questions are also simple:

Q: What is conservatism? A: Conservatism is the domination of society by an aristocracy.

Q: What is wrong with conservatism? A: Conservatism is incompatible with democracy, prosperity, and civilization in general. It is a destructive system of inequality and prejudice that is founded on deception and has no place in the modern world. (2)

What Agre is describing is not Conservatism but Neoconservatism, and therein lies the problem. The party now headed by Stephen Harper is not our historical Conservative "Tory" party, and we need to constantly remind Canadians of that. Neoconservatism is the antithesis of Conservatism and relates more to fascism than democracy.

But rather than force a demagogue on a democratic society, they wrap him up in a cloak of moderation and sell him as a man (or woman) of the people.

One time girlfriend of Leo Strauss (who is deemed to be the father of the neoconservative movement), Hannah Arendt, herself a respected political philosopher, once questioned whether Nazi Germany was in fact a full totalitarian dictatorship, since it depended so heavily on a "certain societal consensus". (3) Their success depended on directing and exploiting public opinion, and they did it masterfully.

That consensus was engineered by the masterful propagandist Joseph Goebbels. Today it is engineered by people like Karl Rove and Guy Giorno, who not only help to get their "leader" elected, but stick around to make sure they do as they're told. And when the government gets into trouble they send their "leader" on a photo-op, so they never have to wear the controversy, leaving others to clean up the mess.

Defining Our Allies - We're Stronger Than we Think

The conventional wisdom in electoral politics has been that getting the support of great numbers of people was more important than courting the wealthy who had money to spend. Rather than pleasing the well-off, good politics decreed that a party design policies to appeal to the great mass of middle-income voters, not the top 20 percent, but the 60 percent in the middle-income brackets. The bottom 20 percent could be safely ignored, as they could be assumed not to vote. However, their basic needs would be covered, not forgotten or left to charity. The favoured electoral strategy was to unite the middle, build support around programmes with wide appeal, and show how each benefits from programmes available to all. (4)

But neoconservatism takes a different approach. They unite upper-income voters around a programme that appeals to the interests of the wealthy, and then convince many middle- and low-income people of the advantages of more business and less government.

But more importantly they create common enemies of the 20% of society that are a nation's most vulnerable. Those who are invisible.

We need to include that 20% and convince them that they must vote, and once we have voted out this neoconservative government, we need to make sure that our most vulnerable never become invisible again. Neocons want us to believe that our "too generous and unaffordable" social programs must be cut or eliminated and wages must be held down (6) to feed this monster named "economy". Meanwhile, the wealthiest citizens just keep getting wealthier, while they are going through with massive corporate tax cuts, and preaching austerity to everyone else.

And of that 60% in the middle, those who support social programs and demand rights are marginalized. And intellectuals who try to cloud issues with facts are dismissed as "university types" and demonized.

So while we advocate for specific groups, march and demonstrate, we have to remember that we are all in this together. We have a common enemy and as such are allies. Neoconservative governments do not allow dissent, but they cannot ignore 80% of the population.

We keep hearing about Harper's "base", that he is pandering to, but who is this "base"? I suspect that many believe they are voting for the party of Sir John A. and John Diefenbaker, without realizing that if the full agenda of this party is implemented, they too will be thrown into the fire, if we lose our public health care and access to education.

In 1994, speaking on behalf of the National Citizens Coalition, Stephen Harper was discussing the accomplishments of the NCC.

"Universality has been severely reduced: It is virtually dead as a concept in most areas of public policy. The family allowance program has been eliminated and unemployment insurance has been seriously cut back." (6)

He believes that if you are successful, it's because you worked for it, forgetting that things like access to public education and medicare, helped toward that success. And if we allow this to continue, we will end up with a Third World type of societal structure, something that has long been a goal of neoconservatism. It's why they fought so hard to maintain apartheid in South Africa and keep Nelson Mandela in jail.

The Politics of Fear

Harper's former VP when he was president of the National Citizens, Gerry Nicholls, wrote recently that:

"Hate and fear make the world go around. Those are the two emotions you must arouse to mobilize citizens. Why is that? I would venture to say that it’s because they are powerful primal emotions that trigger the fight or flight response. What’s important, though, is that you recognize and harness their power." (7)

Another element to the success of the neoconservative movement is fear. It was no accident that at the G-20, journalists and advocacy groups were targeted by riot police. There was a message there. Cross us and you will pay. He is sending the same message to NGOs who risk losing their funding if they challenge any government decision.

But it is also fear of other forces. Rick Salutin explains:

Since the Second World War, the U.S. economy has been built around what you might call the fear sector: its military-industrial complex, its crime-prison complex and its homeland-terror complex. We're now seeing the first attempt by a Canadian government to follow this model.

... The Harper government is clearly impressed. They don't seem to mind big government, if they can tax and spend in the fear sector. So they've expanded our military budget and just announced a $9-billion (or maybe $16-billion) purchase of 65 U.S. jets we'll have to find some use for. They're increasing the prison population through U.S.-style sentencing laws and planning "major construction initiatives" that will boost (sorry) corrections costs by 43 per cent. On homeland security, there's that amazing $1.2-billion spent at the G20.

But it's a hard sell. Canadians will have to be persuaded to shift more money from a stretched health-care system to the fear sector. The benefits here aren't as obvious. For buying those jets, all our firms get is the right to bid on U.S contracts. Lotsa luck. Mostly, though, there's the fear culture that you need for a fear sector. (8)

So we need to cut through all this. Some suggest that we should study the tactics of Karl Rove and emulate them, but I don't agree. I hate divisive politics and I don't think those tactics help anyone. They just turn people off.

We need to mobilize the 2/3 of Canadians who don't support the Harper regime, and educate those of the 1/3, who believe they are supporting the Canadian Conservative tradition.

There are several grassroots attempting to do that, including:

Canadians Demanding a Full Public Inquiry in to the G-20

Canadians for a Liberal-NDP-Green partnership NOW!! (If you like the idea of a coalition. I prefer a Liberal government with the NDP as official opposition, but would definitely be on board with a coalition if that's what it takes)

I'm going to end with one of my favourite John Lennon songs to get us in the mood. I share it often, but am sharing it again, because .. well, this is my blog and I love John Lennon.

2. What Is Conservatism and What Is Wrong with It? By Philip E. Agre, Polaris, August 2004

5. Comes the Revolution: Waiting for the Pendulum to Swing Back, By E. Finn, Canadian Forum, August 1995

7. The Trudeau Empire Has Fallen and It Can’t Get Up! Why now is the time for the Canadian conservative movement to win the War of Ideas, By Gerry Nicholls, December 3, 2008