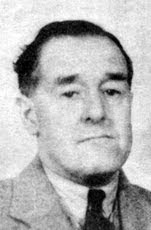 Norman Jaques was a farmer and horse breeder who was first elected as a Member of Parliament for Social Credit in the 1935 sweep.

In a party known for it's antisemitism, Jacques was widely regarded as the most anti-Semitic member of the party's parliamentary grouping. He promoted C.H. Douglas's belief in an international financial Jewish conspiracy, and attempted to read excerpts from the Protocols of the Elders of Zion into the Canadian parliamentary record.

He once suggested that "the Jews control all means of gathering news and of propaganda" and like many in the movement believed that an international Jewish conspiracy was responsible for both communism and Zionism. He opposed allowing Jewish refugees into Canada prior to World War II on the argument that they constituted a communist invasion force, and once dismissed the charge of anti-Semitism against him as a "communist smokescreen". He was a vocal opponent of the creation of the State of Israel in 1947-48, and described Zionism as "a political movement ... to dominate the world". (1)

Like William Aberhart, Jaques became interested in the politics of Father Charles Coughlin, co-founder the Union Party, who had written several columns for Aberhart's newspaper, the Social Credit Chronicle. The Union Party was formed to protest Roosevelt's "New Deal", believing they had a better option.

Norman Jaques went to visit another founder of the Party, Gerald Lyman Kenneth Smith in 1947, and upon his return was quoted in the Montreal Gazette:

"Gerald Smith is truly a great Christian gentleman who has been cruelly maligned. He stands for Christian nationalism. But, of course, the Communists have smeared him as anti-semitic... Smith believes in America for the Americans and in the American way of life... I have tried to do the same with the Canadian way of life and Canadian freedom and I will keep right on trying". Jaques later retracted his support for Smith, and said that most of the quotations attributed to him by the Gazette were fabrications. He did, however, describe Smith as having "done more to expose communist plots that any other public man in the United States of America", and said that he would try to do the same in Canada.

The Anti-Defamation League described Jaques as a "notorious anti-semite who has abused the privilege of entry into the United States by stirring up misunderstanding and tensions among racial and religious groups." (2)

Norman Jaques died in 1949 while still in office.