Tony Panyi Continued: A Shake Up in the Legislature

Though the young Tories of Tony Clement were elated with the victory of Brian Mulroney and their role in his success, there was still a lot of work to be done in Ontario. The party under Bill Davis, was said to be moving to the left of the Liberals, as they worked to appease a more urbanized and progressive province.

Many members of the government, including Gordon Walker, Alan Pope, and senior cabinet minister Frank Miller, also believed the party had drifted too far to the he left, and saw in this group of young radicals, potential allies who could be used as shock troops, should they decide to run for leadership. (1)

They would soon be given an opportunity when Bill Davis announced that he would be stepping down. In a tight race, Frank Miller won the leadership race at their January convention, and was named premier on February 8, 1985, by appealing to those in favour of a swing back to the right.

One supporter was a backbencher from Nippising, who was drawn in part to Miller's previous plans to close a number of hospitals and consolidate urban services. His ideas failed because of opposition from within Miller's own party, but when this MPP from Nippising, later became premier, he, Mike Harris, would not fail.

At the time the PCs were at 55% in the polls, so Miller immediately called an election. It would prove to be his Waterloo.

William Davis was a Red Tory, which is where the provinces' comfort zone lay. However, Frank Miller was not, and he may have been misguided to believe that he could draw the electorate in with a complete shift in policy. Bob Rae, then leader of the Ontario NDP, explains:

Miller was actually older than Davis, and cut from a very different cloth. He was affable enough, but determined to take his party to the right. His plaid jackets spoke of another era. His references to Reagan and Thatcher spoke of an ideological agenda that, to that point, had been foreign to the Ontario Progressive Conservative Party.

Frank Miller's message seemed to be the one the party faithful wanted to hear in early 1985. When the Tory convention was held, the delegates rejected younger, more progressive voices. The great beneficiary of this choice was not me but David Peterson. I did not fully realize this at the time, nor did I understand that the more effective I was in demolishing Miller, the more I was simply opening up room for Peterson. Three-party politics in Ontario create a unique dynamic. For the better part of my lifetime, the success of the Ontario Tories had been their ability to occupy the middle, forcing the Liberals often to the right, and us to the left. (2)

Miller came on the scene in Ontario, in the same way that Barry Goldwater first shocked the moderate and progressive populace in the United States. 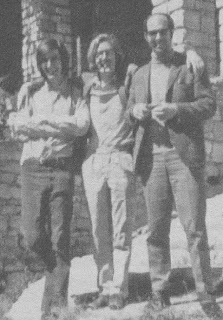 (Bob Rae is in the centre of the 1970 photo on the left, and to his left is someone you may have heard of: Michael Ignatieff. They were lifelong friends and roomed together when they were both at Harvard)

The choice of Miller put the Tories well to the right, and created a generational divide as well. The Liberals' campaign in 1985 was well organized and well presented. Mine was less confident at first, and by the time we gained our voice it was too late. We didn't have enough money, so I had to share a bus with the press. Someone gave me an electric piano, and I drove them crazy with what I thought were clever songs about Frank Miller and the Tories. At the same time, David Peterson was cruising with confidence, promising beer and wine in the corner store, and looking and sounding more like a winner. (2)

But what also hurt the Tories, was Bill Davis's decision that it was time to provide equal funding to Catholic high schools. This definitely became an election issue. When the results were in the PCs were reduced to 52 seats, the Liberals had 48 and the NDP 25, giving them the balance of power. But in a surprise move, Bob Rae brokered a deal with the Liberals , promising support for two years, if his agenda was honoured. Peterson grabbed the opportunity and the PCs became the opposition for the first time in 42 years.

Miller resigned on August 20, 1985, having served as premier for just six months.

The accord with the NDP had proved a gift from God for the Liberals. The agenda that Rae demanded was wildly popular with the electorate, and the Ontario economy—recovering nicely, it seemed, from the early eighties recession—was more than able to accommodate the necessary increase in government spending. Environmental laws were toughened, the scope of rent controls widened. Money was spent on child care and affordable housing. Equal rights for homosexuals were entrenched in the province's human rights code. First steps were taken towards pay equity for women. And most important, the Liberals moved to ban extra billing by doctors, an increasingly common practice across the province. The doctors reacted by going on a limited strike. The government stared them down. The strike collapsed.(3)

Continued: A Party Self Destructs