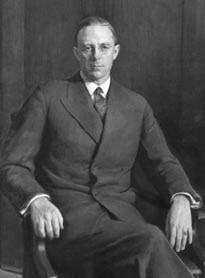 Aberhart's plans for Alberta seemed focused on anti-politics: reducing the role of the elected opposition and blurring the lines between party and state. Politics-as-usual was suspended during Alberta's war on scarcity, and an authoritarian political culture flourished. Bible Bill's charisma mixed populist rebellion with paternalism in equal parts, pushing the need for benevolent authority onto a weary, anxious electorate.

Aberhart's plans for Alberta seemed focused on anti-politics: reducing the role of the elected opposition and blurring the lines between party and state. Politics-as-usual was suspended during Alberta's war on scarcity, and an authoritarian political culture flourished. Bible Bill's charisma mixed populist rebellion with paternalism in equal parts, pushing the need for benevolent authority onto a weary, anxious electorate. (1)

Though Social Credit monetary theories were never really implemented in Alberta, it created a unique style of government for Canada. Based very much on the popularity of fascism at the time, which was viewed as the best way to combat Communism, Aberhart adopted the notion of a strong leader and a compliant populace.

After his death Ernest Manning was content to simply pick up where his mentor had left off, but when oil was discovered and members of caucus saw an opportunity to implement real reform, Manning saw it as a threat, and began cleaning house.

It disturbed me, however, after my return to Edmonton, to learn that Mr. Tanner had visited the home of Mr. [Dennis] Byrne, and called him from his bed where he was suffering from a bad case of flu, to inform him that the Government was no longer desirous of his services. It seemed to me that a man who had given up what undoubtedly were prospects of a successful and lucrative business career in England and who had come to Alberta to render assistance to a strife-torn Social Credit government at nothing more than a subsistence allowance of twelve dollars per day and who had become a close confidante of Premier Aberhart, had risen to the post of Deputy Minister and had proven that his adherence to Social Credit was uppermost, was worthy of more considerate treatment.

This episode had come to the notice of the British papers, the February 22 issue of the Sunday Times of London reporting as follows: "Sacking in Alberta. The Premier of Alberta, Mr. E. C. Manning, announced yesterday," say Reuters, "that Mr. L. D. Byrne, British-born Deputy Minister of Economic Affairs and Mr. Earl Ansley, Education Minister, had been dismissed from office because their policies 'were at variance' with those of the Province's Social Credit Government." Social Creditors are unalterably opposed to Socialism, knowing that, under a program of Socialism, individual freedom is reduced to a minimum. (2)

Byrne was proposing a populist style of direct democracy, where Manning, like Aberhart, wanted control. And to maintain this control he instead, like Aberhart, gave the people the illusion of democracy.

Both Aberhart and Manning believed that the ordinary citizen was incapable of actually making policy: participatory opportunities lay strictly in the areas related to winning elections, spreading propaganda, and building the party organization. Once the general will of the people had been expressed, experts chosen by the party and leader would be used to determine how that would be achieved.

The illusion of democracy was created by a number of political techniques, including "straw votes" and "voice votes." At his huge rallies, Aberhart would call for voice votes on the general results desired by the people — usually very broad universal goals such as "prosperity" or the end to insecurity. Thousands of people, already mesmerized by Aberhart's oratory, shouting out their desire for particular goals, created the feeling of participation even if the goal was predetermined by Aberhart.

Within the party, the straw vote was used extensively at the constituency level and was presented as a test of their support for Social Credit candidates. But it was also a subtle way of making supporters feel that they were genuinely involved in movement building — as well as a method of repeatedly endorsing Aberhart as the leader. The straw votes never failed to achieve the desired objectives. Aberhart would also ask his constituency organization, by radio broadcast, to direct him to carry out a certain course of action, convincing them that he wanted to know their feelings on an issue when he was simply orchestrating support for his own plan.

Laycock describes two other important aspects of Aberhart's leadership: his authoritarian style and the control exerted by his party organization and "...
the portrayal of [his own] leadership and organizational activity as transcending the sordid world of `politics.' "

By the time Ernest Manning took over the Social Credit League in 1943, it had already been transformed from a mass-based, populist party and movement to a party electoral machine dominated by an increasingly autocratic leader and premier. Ernest Manning perpetuated that autocratic leadership and also moved the party further to the right. Realizing that the party was widely ridiculed as the "funny money" party because of its preoccupation with monetary policy, he replaced it with what J.S. and J.T Osborne, in their guide to Social Credit, describe as "the paranoid rhetoric of 'free enterprise and anti-socialism.' (3)

Much has been made of Manning's anti-Semitic purge, and I'm going to get into that in a separate chapter, but the purge was more for political expediency. While neither Aberhart nor Manning were overtly anti-Semitic, the elements remained and helped define the Party throughout it's history. But for now it served Manning's purpose.

In 1948, he purged the party of its openly anti-Semitic elements, which had allowed critics to attack the league as a Nazi party in disguise. This faction included not only neo-Nazis, but a group called the Douglasites, who were named for the intellectual hero of the League and the advocate of wealth redistribution. The Douglasites denied being anti-Semites, claiming only to be against "a cutthroat gang of thugs known as the International and Political Zionists."

Manning moved decisively to block the Douglasites at the 1948 convention and most of them left the party. "The departure of the Douglasites left Manning in complete control of the party and government ... he had used their views to push out the socialist-leaning elements of the party ... Now ... that the Douglasites' public views had become too extreme, he used them as the lever to push them out of the league." (3)

Alf Hooke also discusses another method that Manning used to create the illusion of democracy.

I have seen this Manning magic working at the annual Social Credit convention year after year. Resolutions were often hotly debated while Mr. Manning sat passively in the front row, as though completely unconcerned, yet listening to every word. Always careful to impress upon the delegates that the decisions of the convention would form the basis of government policy, he was more astutely careful to see the vote upon any resolution was in keeping with government policy already decided upon.

The same kind of thing would happen with the Reform Party, which was supposed to be a form of direct democracy. The people were given the illusion of their opinion mattering, while most decisions were made by what was referred to as the 'Calgary Clique', which included Preston's lieutenant, Stephen Harper.

Continued: Manning, Aberhart and the Stain of Eugenics

2. 30+5 I know, I was There, A first-hand account of the workings and history of the Social Credit Government in Alberta, Canada 1935-68, by Alfred J Hooke, Douglas Social Credit Secretariat