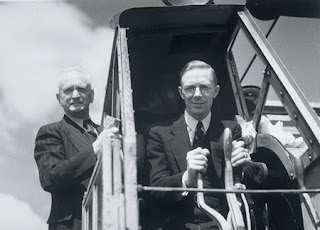 "Social Credit is conservative policy without the nuisance of democracy." W.A.C. Bennett

Since 1947, when Imperial Oil, Ltd.'s Leduc No. 1 gushed from a snow-covered Alberta plain, 45 new oilfields have been spudded in across the province. Portable derricks, lumbering over the land like giant steel giraffes, have drilled more than two new wells a day.

More than 300 million U.S. dollars, one of the freest and fastest streams of American private capital ever sluiced into a foreign country, have been invested in Alberta oil. Reserves of 2 billion bbls. are already proved, and experts say that that is only the first tide from a great oily sea buried deep under the province's fields, lakes and mountains.

... In Edmonton, the provincial capital, steel skeletons of new skyscrapers rise against a background of frame buildings, false-fronted stores and old log houses. The city's population, up from 113,000 to 160,000 since 1946, has spread out beyond the reach of existing sidewalks, plumbing and telephone lines.

... Pipelines crisscross the grainfields; grazing cattle placidly drink out of the safety pools around burning-off oil wells. Oil exploration teams roam tirelessly on the rolling, almost treeless prairie of the south, among the mixed farms and forests of mid-province and through the wilderness of northern woods and lakes. The brisk, winy aroma of prosperity is in the air. (1)

But with all that American money, came an import of American culture that would change the fabric of Alberta.

Oil company owners, many of them American themselves, identified strongly with their U.S. cousins, and Alberta was often described as a sort of second-string Texas. The American free-enterprise spirit and the cult of the individual is strongly embodied in the oil-patch culture. (2)

"Oil-Patch culture" is an astute characterization for what would very much define the western neoconservatism movement, which would later be embraced in the East under what Ernest Manning called "The Free Enterprise Way of Life."

And while the party was originally elected to bring radical relief to Depression era sufferings, "... the government under Manning institutionalized itself into the technocratic manager of Alberta's growing resource economy ..." (3) And in the same way that all neoconservative governments come to power fighting "big government", then increasing it, Manning was no exception.

Manning's battles against the Supreme State conspiracy for world government, social programs and medicare didn't stop him from creating a Big Government of his own. Social Creditors managed to spend more than any provincial government in Canada ... Manning built up a peculiar kind of welfare state, one that dedicated itself to roads, health and education but placed ideological limits on its responsibility to citizens by imposing user fees, means testing and other individual barriers within a growing bureaucracy. The party that once preached about finding a cure for "poverty in the midst of plenty" now advised the poor not to expect too much sympathy. The limitless horizon of the frontier, the wealth beneath the buffalo bones, was God's gift only to those with personal access to the tools of civilization—industry, freedom, faith—and the gumption to use them. (3)

The Americans couldn't be happier. "Enthusiastic oilmen envision the Alberta of the future as a northern Texas whose oil and gas pipelines will fan out over the top half of the continent, driving the expanding industries of Canada and the northern U.S. as the oil and gas of Texas now power the South and East." (1)

Aberhart may have created a theocracy, but Manning turned it into a corpocracy, albeit with the hokey sentiment of: "... a free-enterprise party extolling the virtues of individual liberty, the traditional family, and the supremacy of God." (4)

Don't like Big Government? Try corporate government instead, they seem to say, reiterating the sort of do-as-we-say mentality that flourished under the likes of Aberhart, Manning Sr. and W. A. C. Bennett. It's a woefully limited conception of democratic freedom, where free-market worship is offered up as a surrogate for genuine political engagement. (5)