A Clever Distraction: "Any Palladini is a Pal of Mine" 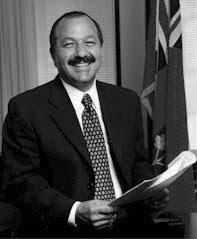 Before entering politics, Al Palledini was the owner of the Pine Tree Ford Lincoln dealership in Woodbridge, Ontario. He was best known for his slogan "Any Palladini is a pal of mine" and a series of television ads created by a young Rick Moranis.

But with the help of Reform Party members who taken over the riding association, he beat out his next opponent by more than 8000 votes.

Palledini* was likable enough and always smiling, but he also earned a reputation for "barely taking the time to open his mouth before changing feet". (1) He was also ill prepared to become a cabinet minister, having just a grade eleven education and never having been involved in politics before.

In fact, when Mike Harris called him to tell him he would be the new Minister of Transportation, he thought he had dialed the wrong number. "This is Al Palledini, Mr. Harris ... " (2)

What Palledini didn't realize was that neoconservatism demands that cabinet ministers are either ill qualified or won't blink. He fit the first description. Political science professor and author Brooke Jeffrey explains:

His [Mike Harris] theory was unique, but understandable if one considers his neoconservative perspective. Normally, ministers function as spokespersons for the "constituencies" they represent through their Departments. The minister's role, around the cabinet table, is to put forward legislation benefiting these client groups, or to express concerns about the proposals of other departments which might have adverse implications for their constituencies. .... But Mike Harris has a different view of government, and so naturally his view of the role of ministers is also at odds with tradition. ... If they were to have any hope of implementing their ambitious and radical agenda, no minister could be allowed to be captured by client groups ... (3)

In February of 1996, when the Harris government announced that they would be pulling the public transit funding (to help pay for the 30% cut to income tax), Palledini was rudderless trying to deflect criticism. (4) This was tough on municipalities, especially larger urban centres that required this service. Harris tried to offset it by suggesting that his cabinet ministers would forgo their chauffeur driven limos, causing Palledini to state "Fighting the traffic to come downtown, I'm not used to. I wouldn't want to do it everyday. It's rough." (5)

Palledini was not totally useless however. I have to say that I liked the late Al Palladini and that I admired his performance as Minister of Transportation. Unlike John Snobelen, he didn’t poison the waters talking about the need to create “a useful crisis” to instigate reforms, and Palladini went after drunk drivers and truck safety with a vigour that I’ve not seen in many a minister. (4)

He was just out of his league. In the end it was not his incompetence however, that caused his demotion but a public scandal, when it was learned that he had been paying $1500.00 a month in child support for a baby he had with a woman, not his wife. (5) On October 10, 1997, he was demoted to Economic Development, Trade and Tourism.

Palladini's move, which many saw as a demotion, also allowed former Harris adviser and neo-con stalwart Tony Clement to take over the reins at Transport as Palladini moved on to become Minister of Economic Trade, Tourism and Development. In announcing the shuffle the premier nevertheless chose to accentuate the positive, describing Mr. Palladini as "the best salesman in government" and declaring he had "the energy, enthusiasm and commitment to market Ontario around the world." (5)

And Palledini did not disappoint those who looked forward to his comic relief.

By 1998 Mr. Palladini was up to his old tricks again. Rather than selling Ontario to the world, he was busy lambasting the cab drivers of Ottawa for "shoddy" vehicles and incompetent service. Residents of the nation's capital, always attuned to slights from the provincial capital, responded with their own gibes at the hapless minister. Finally, the mayor of Ottawa, Jim Watson, managed to put the matter in perspective by pointing out that the issue of licensing was a municipal, not a provincial, responsibility in any event, and that he didn't "think we need a royal commission on the matter."

The uproar over his broadside had barely subsided when the minister was widely quoted for his enthusiastic reply to a reporter's tongue-in-cheek question about the state of the economy and recent buoyant liquor and condom sales. "I think they go hand in hand," the minister replied, apparently serious. "I think it's great ... I hope they give Mike Harris's government the credit for all the partying that's going on, and all the positive things that are happening in our economy. I think it's all tied in. It's all one and the other." There was no official word on the reaction of the Tories' "family values" caucus, but it seems unlikely they were amused. (5)

Al Palledini died on March 7, 2001 in Mexico. Support for Harris's reign of terror was plummeting. Two by-elections in particular "suggested that the bloom was off Mike Harris’ rose" Palledini's riding of Vaughan-King-Aurora, went to Liberal Greg Sorbara in a byelection on June 28, 2001, where he took 61% of the vote, and in another; Beaches-East York the Conservative candidate could only muster 10% of the vote. (4)

Tony Clement and 101 Things to do With Cat Food

*Palledini's legislative assistant was Joan Tintor who would later become a "Blogging Tory". In 2007, the Harper government gave a contract for communications consulting worth up to $20,000, to Tintor, for "communications professional services not elsewhere specified." They claimed this was not for her blog, but she refused to be interviewed.

In his new book, Harper's Team: Behind the Scenes in the Conservative Rise to Power, party strategist Tom Flanagan notes the Tories' innovative use of blogs in the 2006 election campaign. He cites in particular two members of the Blogging Tories, Steve Jank and Stephen Taylor, who write highly partisan blogs on federal politics. Mr. Flanagan writes that campaign manager Doug Finley "appointed people to monitor the blogosphere and to get out stories that were not quite ready for the mainstream media." These bloggers "amplify and diversify our message," he wrote.