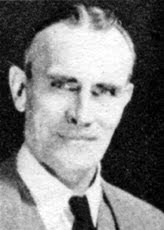 After the stunning victory of William Aberhart and Social Credit in Alberta in 1935, the party decided to capitalize on the wave, and ran candidates in the federal election.

Taking place on October 14 of that year, they had very little time to organize, yet were able to win 17 seats, 16 of which were in Alberta; on the promise of monetary reform.

R.B. Bennett's Tories took a trouncing, partly because of internal rifts, while William Lyon MacKenzie's Liberals won a majority with 173 seats.
One of the Social Creditors who would make his way to Ottawa was John Horne Blackmore, a school teacher and principal in Lethbridge, Alberta. He would assume the role of federal party leader, and hold that position until 1944, when a convention elected Solon Low.

Blackmore was born on March 27, 1890 in Sublett, Idaho and came to Canada in 1892 with his parents as part of the Mormon emigration.

In 1882, the Edmunds Act forbidding polygamy was passed in the United States and many Mormon families came north to Canada, settling in southern Alberta. Initially Albertans were worried about this immigration, hearing of clashes between the American government and the Mormons over the issue of polygamy, and did not want to have such conflicts in Alberta. But in 1890, the Mormon Church banned the practice and the Canadian government began to encourage their settling here, as they were considered to be good farmers. (1)

Blackmore himself would take up the cause for "plural" marriage, even urging Parliament to repeal the anti-polygamy law. As a result he was excommunicated by the Church of Jesus Christ of Latter-day Saints.

Blackmore never had more than one wife. But he was thrown out of the church for "teaching and advocating the doctrine of plural marriage" at secret meetings in southern Alberta where men debated whether Mormon leaders were wrong to have renounced Joseph Smith's revelation that it's okay for men to have multiple wives.

A year before Blackmore was excommunicated, one of his 12 children, Harold, bought property outside Creston and settled there with his two wives and a growing brood of children. Soon, John's brother, Ray, bought property there as well and took up residence with his first two wives. Eventually, he had five wives and more than 30children, including Winston. (2)

Winston Blackmore is the nephew of John Horne Blackmore and leader of polygamist town of Bountiful, that has had many run ins with the law.

Made up of as many as 1,000 adherents of a fundamentalist Mormon sect, Bountiful has been home to clans of polygamists since the arrival in the late 1940s of the homestead's founder, Harold Blackmore, who — according to one account — was drawn to the valley after envisioning it in a dream. Blackmore was part of the fundamentalist Church of Jesus Christ of Latter-day Saints, which was expelled from mainstream Mormonism in the 1930s. For generations, local farmers co-existed with the polygamists of Bountiful. But this relationship, based on the country tenet "live and let live," grew increasingly uneasy over time as strange stories of life within the settlement leaked out and found their way into the media, with accounts of a power struggle between Winston Blackmore, the sect's leader in Bountiful, and Warren Jeffs, the leader of the FLDS Church. Jeffs, now incarcerated in the U.S. for being an accomplice to rape, is facing charges in the aftermath of the raid on the polygamist Yearning for Zion Ranch in Eldorado. (3)

Ironically, many of the current Reform-Conservative MPs claim that same-sex marriage will lead to polygamy, and yet in the case of Bountiful, it's religious fundamentalism.

Both communities follow the preachings and directives of a ninety-one-year-old " prophet " named Rulon T. Jeffs. His Canadian lieutenant is forty-five-year-old Winston Blackmore. These men, according to former UEP members, have an iron grip on their flock, dictating who lives where, who is shunned, which man is to be blessed with his third, fifth, or fifteenth wife, even what style of undergarments are to be worn. Jeffs and Blackmore deny such extensive control over members' lives but freely admit to polygamy.

John Horne Blackmore and the Protocols of Zion

John Blackmore would also get himself into trouble when copies of the Protocols of the Elders of Zion were mailed out from his constituency office in the fall of 1953.

Alberta Socred MP John Blackmore, an ardent supporter of the rabidly anti-communist United States Senator, Joseph McCarthy, was distributing from his office in the House of Commons the notorious Protocols of the Learned Elders of Zion. Moreover, Blackmore's secretary, Doris Moore, had been using House of Commons stationery and the MP's postal frank to distribute anti-Semitic literature.

According to Moore: "I made the discovery about Communism being Zionism and heading the great banking systems of the world ... the evidence is here." Blackmore stated that Moore mailed the material on her own volition six days before he arrived for the parliamentary session. Whether he was using his secretary as a scapegoat is debatable, but when asked if he agreed with her actions, Blackmore replied: "I wouldn't disagree. I won't say I would have sent the material out but she did. I'll take a neutral attitude." Yet he also emphasized that neither he nor the Social Credit party was "responsible for what Miss Moore does." In response to whether the books in question were anti-Semitic, Blackmore commented: "They are anti-Communist ... [there] are traitors who are seeking to destroy our civilization ... if the Jews get mixed up in it, can that be helped?" To other reporters, Blackmore asked: "if you tell the truth about Jews, are you anti-Semitic?" and "If the Jews get mixed up in a Communist conspiracy, can they hope to escape censure?" (5)

While he allowed her to take the fall, this was not contrary to the beliefs of Ernest Manning himself. He warned his listeners to "keep your eye on that strange little country, Israel" and in "a radio broadcast discussed the relationship between Russia and the State of Israel, invoking biblical prophecy to claim that Russia would be ruled by the Anti-Christ, that Israel would ally itself with Russia and consequently Israel would be betrayed and crushed." (5)

Then national Social Credit leader, Solon Low told the press: "If she were my stenographer, I'd have got rid of her long ago. I'm surprised at her attitude. I wouldn't condone the use of my frank by my secretary for this sort of thing. As a party we're certainly not having anything to do with it." And yet days later he told a meeting of the Ontario Social Credit party in Toronto, that regarding the material itself, he couldn't see how "by any stretch of the imagination it could be remotely identified as anti-Semitic"; rather, it was simply anti-communist and nothing more. (5)

Blackmore would remain as Social Credit MP until 1958, when he lost the election during the Diefenbaker sweep. He died on May 2, 1971.

3. Raiding the Polygamists: An Eldorado North of the Border, By John Nadler, Time Magazine, January 9, 2009

5. Beyond the Purge: Reviewing the social credit movement's legacy of intolerance, By Janine Stingel, Canadian Ethnic Studies Journal, Summer, 1999
Posted by Emily Dee at 2:52 AM