John Snobelen: Kraft Dinner? Really? How Could They Afford it? 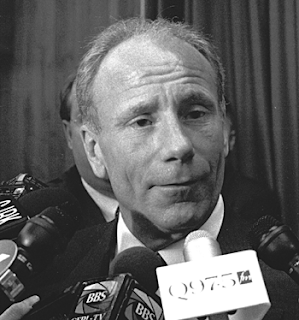 Since our local newspaper has gone to Sun Media, I rarely read it, though maybe I should start. The blasts from the past would warm the cockles of your heart.

Well maybe not so much warm as inflame.

My husband says he still buys the paper so he can read the obituaries, but I jokingly tell him that the day his name appears in them, is the day I cancel the damn thing.

This past week we have been treated to some of the worst dregs of the neoconservative movement, all trying to justify the 1.3 billion dollar expenditure for security, while painting the peaceful protesters as thugs.

Their bringing up the burning cars and smashed windows, no longer has merit, after it was revealed that the police could have stopped it and rounded up the vandals easily, but were told to stand down.

Stephen Harper needed those images to play out on the jumbotron while lounging around fake lake. He used them to tell the crowd, who were convinced he was doofus for spending that much money on security, that this represented his reasons for the expenditure.

I'm sure the question on most of their minds while watching the mayhem, was "so where's the security?" I guess Steve didn't think it through.

But when my husband cut out a column by John Snobelen, I thought enough is enough. Given the calibre of Sun columnists these days I wasn't surprised (Michael Den Tandt claimed that the weekend was a success because no one was killed), but what surprised me was that Snobelen had the nerve to show his face in Ontario.

The last I heard of him he had been arrested.

But Since he Brought It Up

In his column, Snobelen remarks: "About 15 years ago I had the pleasure of presenting a rather large cheque to the good folks at York University. For the occasion various dignitaries had gathered in the main lobby of the campus. When I stepped to the podium to deliver some remarks — and the cheque — a giant protest banner was unfurled and students began throwing Kraft Dinner at me."

Now I realize that rubber bullets don't have the same impact as Kraft Dinner, but he should have been honoured. This was during the Mike Harris years. If you could afford Kraft Dinner you were really somebody, and it was not something that would have been tossed around willy nilly.

What he fails to mention in his column is why the students were so upset and not willing to accept his "peace offering". The cancellation of OAC and the dismantling of Ontario's education system through Bill 160.

Ontario has been the envy of most other provinces over the years, at least in terms of a few educational indicators. One of these areas has been its student retention rate. The number of students who have remained in school in Ontario has been consistently the highest or nearly the highest for the past couple of decades. It can be argued that this has in large part been a result of the existence of the Ontario Academic Credit (OAC) year ... On November 2, 1995, however, John Snobelen, Minister of Education, announced the cancellation of the OAC year in Ontario beginning in 1997 ... The province intends to compress its five high school years into four years. Snobelen said, "It means we're going to do some compression and have normal high school completed in four years". How is the reduction of the number of years of schooling likely to affect Ontario students? (1)

But since things were going so well before Mike Harris, the government had to find reasons to gut education, and Snobelen was actually caught on tape, suggesting that he could just "invent" some.

Perhaps the clearest evidence of the necessity of a crisis in education, in order to justify overhauling the system, was illustrated by the Ontario Minister of Education and Training. John Snobelen, caught on videotape explaining to the managerial level of the Ministry the need to "create a crisis" to justify the restructuring (some would say dismantling) of public education in Ontario, provided a grim reminder of the beneficiaries behind this scheme, and the subsequent duping of the public to justify it. (2)

They wanted to privatize our schools and Snobelen was willing to "create a crisis" to justify it. Royal Canadian Air Farce fired their famous chicken cannon at his image on November 22, 1996, but he only remembers the Kraft Dinner.

John Snobelen: The Epitome of a Neoconservative Cabinet Minister

Some people wonder why Stephen Harper appointed Gary Goodyear as science minister. A man who doesn't believe in science. Or Gail Shea to Fisheries when she wouldn't know one fish from another. Or Helena Guergis to any cabinet position when she was ... well ... Helena Guergis.

It's neoconservatism 101. You don't want a minister who will identify with stakeholders. Their only job is to tear down so the government can sell off.

John Snobelen was a perfect example of this. The man was a high school dropout who only went as far as grade eleven. This made him perfect to "act" as Minister of Education, or as he referred to himself; the Minster of Edjamacation.

His [Mike Harris] theory was unique, but understandable if one considers his neoconservative perspective. Normally, ministers function as spokespersons for the "constituencies" they represent through their Departments. The minister's role, around the cabinet table, is to put forward legislation benefiting these client groups, or to express concerns about the proposals of other departments which might have adverse implications for their constituencies.

.... But Mike Harris has a different view of government, and so naturally his view of the role of ministers is also at odds with tradition. ... If they were to have any hope of implementing their ambitious and radical agenda, no minister could be allowed to be captured by client groups ... The premier's view of the cabinet's role helps to explain John Snobelen, a man with a grade eleven education, ending up in the driver's seat at the Ministry of Education and Training. (3)

See how neoconservatism works? The dumber the individual is, the bigger their portfolio. I mean look at this guy. Or this guy. Back to Snobelen:

The self-made millionaire with the grade eleven education, whose fortune came from a waste-transport business, was evidently a fan of business-management theories and jargon. Seen musing on video with departmental officials about the need to "invent a crisis" in education, Snobelen did himself irreparable damage shortly after taking office, damage which no amount of explanation about the context could remedy. Certainly not the minister's own explanation that to invent a crisis was "not just an act of courage, there's some skill involved." Likewise his use of the term "tool kit" to describe his department's proposed $400 million in reforms produced much hilarity, but little action.

His alternatively unctuous and aggressive manner also did little to repair his image. His failure to deliver on the promised reforms, and unwillingness to communicate with stakeholders, were a major source of frustration. One Ottawa trustee, infuriated by the uncertainty, actually bought a ticket to a Tory fundraiser in order to confront the premier on the issue. Ted Best told reporters, "I've been a trustee for 23 years and I've never, never seen such a lack of communication. I don't know if it's arrogance on Snobelen's part or ineptness, but they're losing credibility fast."

The minister's subsequent battles with the teachers over Bill 160 —the government's plan to centralize control of education at Queen's Park and drastically reduce both the number of teachers and overall expenses — became legendary. By the end of his tenure, the two sides were barely speaking. (4)

But at the end of the day, it was not his incompetence or mean streak that was his undoing.

In late 2002, it was reported that Snobelen was spending most of his time at a private cattle ranch in Oklahoma while still drawing a Member of Provincial Parliament's (MPP) salary. Faced with criticism, he returned to the legislature for most of the 2003 session and resigned his seat on March 17. (Wikipedia)

From the Ontario Legislature:

"Mr Premier, I'm trying to imagine taxpayers in Orangeville or Parry Sound or Pembroke reading the papers today and faced with this situation, particularly from a Conservative government led by Ernie Eves, late of the Common Sense Revolution, which was all about taxpayer responsibility and accountability and citizens' responsibility. We've got a situation, apparently, where a Conservative member of the Legislature, who is being paid $82,757 a year, wants to spend his time in a foreign country while accepting $82,000 of public money from the people of Ontario. If Mr Snobelen wants to be in Oklahoma, the people in Orangeville, Parry Sound and Pembroke would say, "Let him resign and go to Oklahoma." But you, as the leader of his party and leader of the government, surely must do one of two things: ask for and accept his resignation, or demand a work plan from our friend the member from Mississauga West which would justify the people of Ontario paying $82,757 for his salary." (5)

Can't wait to see who Sun Media gets to spin the G20 debacle next. Hope it's Al Palladini, another Harris cabinet minister with a grade eleven education. He was the minister of transportation who when it was announced that the sky traffic helicopter was being cancelled, suggested that it was not up to the government to worry about traffic or stranded motorists. That job should be done by civilians with cell phones.

At that time "car phones" were rare and very expensive. Naturally the legislature howled, and as one suggested the minister should "take a long ride up to Wawa in his limo and let him try to phone in and tell us how he's doing." (6) "Can you hear me now?"

Eeeeek! Great. Just got that image and now I'm blind.

1. SCHOOL RETENTION AND THE CANCELLATION OF OAC'S, By Noel P. Hurley, Faculty of Education, University of Windsor, Winter 1996

2. The CCPA Education Project: Learning About the Commercialization of Education, by Erika Shaker, Canadian Centre for Policy Alternatives, July 8, 1998