In the spring of 1963 the Social Credit Party would again be in trouble over antisemitic remarks made by one of their members. This time it was Neil Carmichael, a coin and stamp dealer and five-time federal Socred candidate in the Toronto riding of St. Paul's.

Carmichael declared that Baron de Rothschild was attempting to buy up Canadian mining interests through a non-Jewish agent. The Rothschild family, Carmichael declared, was part of an international financiers' circle which was attempting to acquire all Canadian business enterprises. Moreover, the Rothschilds and other financiers were able to borrow money from the International Monetary Fund, which was supported by Canadian tax dollars. "The public is being taken for a ride by the moneychangers," announced Carmichael, "and their money is being taken from them by the bigshots in the money world." (1)

The Globe and Mail reminded it's readers: "From its earliest days the Social Credit Party has been suspected of having anti-Semitic inclinations ... [Carmichael's speech] comes very close to the familiar anti-Semitic propaganda dealing with Jewish financiers and their alleged machinations to enslave the world ... Unless Mr. Thompson at once disowns Mr. Carmichael, the public will be entitled to conclude that the Socreds are willing to harbor men of such unpleasant opinions within their ranks."

And the Toronto Telegram remarked: "Mr. Carmichael's expose smacks of the wilder accusations dredged up from time to time by the former Social Credit member from Lethbridge, John Blackmore. And, of course, it also smacks strongly of the anti-Semitic canards spread by the Nazis. If this surprises, we should remember that the deputy leader of the party, Real Caouette, has more than once expressed his admiration for the economic policies of Hitler and Mussolini."

Party president Robert Thompson was again forced to step in. He denounced Carmichael's comments and stated that the party did not condone antisemitism. And yet at about the same time he was praising Ronald Gostick on official party stationary (2) 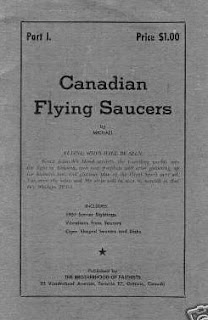 Carmichael was a controversial figure, known for more than just his antisemitism. He belonged to a religious cult known as the Brotherhood of Faithists, started in the late 1800's by Dr. John Ballou Newbrough, and believed by it's followers to be the only true faith. (3)

The Toronto group would meet in the drawing room at the Casa Loma where they would engage in the building of a "cosmic pyramid". They also distributed pamphlets about flying saucers, something they devoutly believed in. The pamphlets were signed "Michael", but it is believed that they were written by Neil Carmichael. (4)

The Social Credit Party like the Reform Party that followed, did little to discourage these right-wing fringe groups. They recognized that they had a following and a passion that could be tapped into for votes.

When they were eventually outed by the press, they would simply distance themselves and go through all the right motions to appear ignorant of the situation. Carmichael ran for the party five times. His views were well known for years.

And after Carmichael's remarks were made public he again went on the attack:

As had happened before, assurances by the national leader were undermined by further anti-Semitic utterances. Shortly after his censure Carmichael addressed a Social Credit candidates' meeting in Toronto and shouted: "I'm being persecuted by the Jews ... I'm a martyr ... I think it was a Jewish reporter from the Globe and Mail who started this whole thing." Then, in words reminiscent of Caouette, Carmichael declared that Hitler's economic system was "a very good and sound system of money" and that the Nazis "had it all figured out so that there was no unemployment." The Toronto Star deftly made the connection, remarking: "It seems clear that [Carmichael] holds strong anti-Semitic views and--like Real Caouette himself--is an admirer of Adolf Hitler." The newspaper then asked a most telling question: "Why has Social Credit, throughout its history, attracted men of this type? It was a question few Social Crediters were willing, or perhaps able to answer. The fact was that the undercurrents of Douglas's ideology could never be completely expunged. (1)

It was clear that the national Social Credit party leaders were more interested in sweeping the issue aside than confronting it.

Notwithstanding his obvious anti-Semitic predilections, Carmichael was permitted to continue as the party's nominee in St. Paul's riding (his fifth bid for a seat in the House of Commons) although he was encouraged not to stand for election again. Even then, the party did not condemn his anti-Semitism. The Socred investigating committee, led by national leader Thompson, ruled that Carmichael had been "careless and indiscreet" in his comments but not anti-Semitic. It will be noted that this ruling came after Thompson's promise to "kick out" any Social Crediter who was anti-Semitic. Another member of the national executive emphasized that Carmichael was an isolated incident: "Fortunately there is little of this sort of thing left. [Carmichael] is a leftover from an era we would sooner forget about." But as David Lewis, deputy leader of the federal New Democratic Party, commented: "Carmichael is only a symptom. The disease goes much deeper." (1)

Ernest Manning would dismiss it by saying that bright lights attracted bugs, but why did they continue to shine such a bright light to lure them in? In this case it was anti-semitism, but would later under Reform, include anti-gays, anti-women's rights, anti-immigration, anti-multiculturalism, anti-Muslim ... the list goes on.

The only difference between the Social Credit Party then and the Conservative Party of Canada now, is that the latter no longer apologizes.