Randy Hillier Takes a Stand: Is Tim Hudak Losing Control of His Caucus? 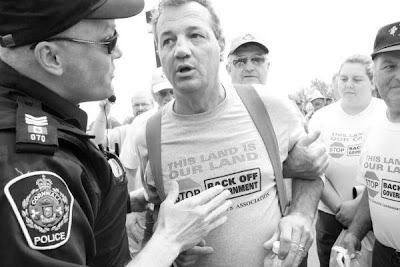 Several years ago my husband and I stayed in Peterborough, as part of a mini-vacation. When leaving our hotel we noticed a rather large rally where demonstrators, carrying signs "This Land is Our Land", had lined the drive.

We honked believing it to be a native protest, but soon realized that there were no native faces in the crowd.

When we returned later that day, the protesters were still in full force but had been moved across the road and several police cars now guarded the hotel entrance.

I asked the girl at the desk what was going on and she explained that there was a hockey tournament in town that weekend and there was an aboriginal hockey team staying at the hotel. These people were protesting native land claims.

Why was an out of town group of young men, who only wanted to engage in a sporting event, being targeted by a rather large and noisy group of angry white "landowners", I wondered. When I posed the question to hotel clerk, she rolled her eyes and said that "they were nuts" and did stuff like that all the time.

This Peterborough group soon became part of a larger organization, when an umbrella group was created in 2005, called the Ontario Landowners Association. Their first president was Randy Hillier, now Tim Hudak's MPP for Lanark—Frontenac—Lennox and Addington.

Hillier had originally headed up the Lanark Landowners Association, whose motto was “This Land is Our Land: Back off Government”. They had become notorious for stunts though Hillier would refer to it as civil disobedience.

This "civil disobedience", included blocking highways, barricading government offices, staging illegal deer hunts, and publicly breaking laws that the Landowners regarded as unjust. This was primarily done as a tactic to draw media attention to perceived injustices, and thereby to pressure the provincial government to amend the laws. Hillier has explained the illegal actions of the Landowners as follows: "I believe in non-violent civil disobedience. I believe when a law or rule is blatantly wrong it is a part of our democratic process to challenge that law. At times civil disobedience is used to illustrate and further bring attention to the absurdity." (Wikipedia)

"I sent [Ontario Premier Dalton McGuinty an email containing] a picture of a dead deer saying the people of Lanark County were removing nuisance deer because the Liberal government had revoked those licences [for farmers to shoot deer that were eating their crops]. I did it four years ago... and I would do it again ... " (1)

His group scored a victory on the illegal out-of-season deer hunt, fuelling their cause and in April of 2004, launched a large protest on Parliament Hill. Stephen Harper attended the rally and addressed the crowd, promising to make property rights a priority if elected prime minister. It was pretty clear that he was not only trying to woo the theocon vote, but was also trying to draw in the right-wing fringe groups.

You would have thought that he would have learned his lesson after the problems this imposed for the Reform Party. They had passed a motion at their opening assembly to allow extremist groups to join the party. When the question was posed, even Doug Christie? someone in the crowd spoke up. "Ah, leave him in, we may need him later". (2) Christie was leader of the Western Canada Concept, a Party pushing for the Western provinces and territories to split with Canada and form their own nation. Stockwell Day's father was a member of this group.

Eventually the extremists all but took over the party, necessitating a reinvention, though many of them are still around. Stephen Harper handles them by silencing them, but in a democratic country, elected officials should never be "silenced". It flies in the face of democracy.

Randy Hillier and the Religious Right

Once the Ontario Landowners Association was established, Hillier decided that instead of simple acts of protest, to move the group into the mainstream, by attempting to infiltrate government and implement changes from within.

So with the endorsement and help of his group's members, he successfully won a seat in the Ontario Legislature in 2007. Hillier not only endorsed "land rights" but backed a social conservative agenda, bringing him to the attention of Tristan Emmanuel, a controversial leading member of Canada's Religious Right.

Emmanuel backed Randy Hillier's bid for leadership of the provincial party, and though a long shot he became a kingmaker for Tim Hudak, when he threw his support his way:

Landowner leader Randy Hillier brokered a deal with former PC leader John Tory to avert the possibility of Landowner candidates. It is widely believed this resulted in the inclusion of anti-environmental clauses in the PC Party’s platform in 2007 and Hillier’s own candidacy for the PCs in Lanark.

Hillier’s leadership run last year was fueled by the Landowners, and Tim Hudak’s anti-Human Rights Commission positioning was designed to broker a deal with the Landowners and other radicals. Hudak will need to come to terms with these Landowners if he doesn’t want a problem on his right ... (3)

However, when you sell your soul you have to expect that eventually those who hold the lien are going to expect payment, and I think that Randy Hillier is beginning to become a problem for the Mike Harris protege Hudak.

We first saw this with the sit-in at Queen's Park in December:

For novice PC Leader Tim Hudak, his party's protest over the Liberal government's proposed harmonized sales tax produced a couple of unforeseen outcomes. The first was his own loss of face when a caucus member apparently defied the boss's wishes in a stunt that spun out of control ... As it unfolded, eastern Ontario MPP Randy Hillier hopped aboard, apparently ignoring instructions from caucus elders that he leave the Legislature when ejected by Speaker Steve Peters. Hillier's defiance of not just the Speaker but his own leadership raised embarrassing questions as to who was running the PC show. (4)

Now Hillier is once again challenging the authority of his leader, by posting a column on the handling of the G-20 security.

Instead of a choosing a more controlled and less populated location that would not be such a powerful magnet for the few juvenile anarchists, Stephen Harper agreed to host the G20 in a location that he had to have known would draw the greatest opposition and most violent response, therefore justifying an outrageous expenditure of public dollars and creating an army of police equipped with a siege mentality.

Both the provincial and federal governments now attempt to shirk responsibility for their actions by shifting blame to one another and to the police, who were acting under political orders ... .They both use the common theme that upholding law and order required usurping our civil liberties. Any elementary school student knows these are not mutually exclusive — in fact, they are wholly interdependent. As numerous failed dictatorships have proven, you cannot have law and order without civil liberties. (5)

His column was a direct contradiction to one inked by Tim Hudak, where he placed all the blame on the protesters and backed the police action. How Hudak will handle this is any one's guess, but I think he is learning the hard way that once you court the Religious Right, they hold all the power. Stephen Harper is now learning this and while bringing in fringe groups for support, both leaders are facing the problem of knowing what to do with them.

I think this will end badly for citizens who only elect officials to govern, not appease right-wing factions.