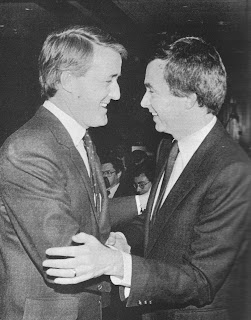 When Anthony Panayi entered the University of Toronto, he had reinvented himself as Tony Clement, and was ready to inflict his Reagan/Thatcher adoration on the University's Tory Youth.

What he lacked in physical stature, he made up for with enthusiasm, and through aggressive marketing and the help of cohorts, he accomplished his goal, building up the campus Tories to almost 500 members.

With strength in numbers they were ready to take on the world of federal politics, and the timing couldn't be better.

Brian Mulroney was in the process of trying to reinvent himself as a man of the people. During the 1976 leadership convention, he had aligned himself with people like Conrad Black and Paul Desmaris of the Power Corporation, running a glitzy, in your face, campaign. His opposition was able to paint him as an "elitist" and he lost the race as a result.

But by 1983, he had learned his lesson, and gone were the Cadillacs and lavish posters. He was going to be a man of the people, opting to travel around in an old Plymouth, fly economy, and dress down his campaign office.

His campaign manager, Peter White, also saw the potential in veering away from the progressive side of the party and tapping into the vote rich right-wing. So Mulroney's rhetoric had already changed to reflect things like lower taxes, balanced budgets and a free market economy.(1)

But White had also discovered a gold mine in a group of neoconservative youth from the University of Toronto, led by Anthony Panayi Clement.

The campus radicals were also instrumental in the defeat of federal Conservative leader Joe Clark by corporate lawyer Brian Mulroney. "In 1981 to '83 there was a guerrilla campaign against the leadership of Joe Clark orchestrated by Brian Mulroney and the people who backed Mulroney," says Campbell. "In Ontario, the PC campus and youth associations were all hotbeds of anti-Clark activity and we were all on the anti-Clark side." The success of the right young Tories in helping force a leadership convention and in electing Mulroney over Clark strengthened their confidence. (2)

The Young Conservatives had also claimed a victory in 1982, at the Ontario Policy Convention.

They had been upset with the expansion of the Ontario Human Rights Code, under premier William Davis, seeing it as an intrusion of the state. So, led by Tom Long, who had cut his political teeth campaigning for Ronald Reagan (3), "... the young Tories tried to force a debate on the issue at a party policy convention. The senior guard warned the young rebels to tone it down; policy conventions were no place to debate policy. But the campaign continued, and faced with the prospect of an ugly public fight, the leadership compromised. Representatives of the youth wing were allowed to help draft the wording of the final resolution on amending the code at the convention. "It wasn't perfect," says Clement, "but it was something we could live with." (2)

But their work for Brian Mulroney would turn out to be perfect, as he had a landslide victory in 1984, winning the largest majority government in Canadian history.

Another Young Conservative Goes to Ottawa 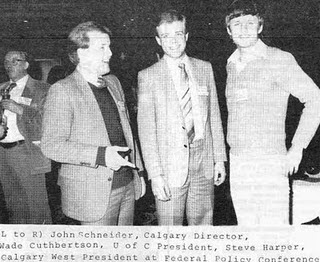 At the time there was another Young Conservative who was helping to boost the fortunes of Brian Mulroney. Then going by the name Steve, he and his girlfriend, Cynthia Williams, volunteered in the offices of Jim Hawkes, Progressive Conservative MP for Calgary West.

Already a member of the National Citizens Coalition, he too had begun to adopt radical right-wing views and a zeal to see them put into practice.

"At the [town hall] meeting they were among the few young people in attendance ... Steve in particular was disgusted with the Liberal government ... My recall is that he did not know very much about the organized political party aspect of politics ... he had concerns about the policy part of politics. They [Steve and Cynthia] joined the association. Then the next thing I knew, they were working within my riding association as volunteers, and members of the executive." (4)

Harper and his girlfriend would help out with Jim Hawke's campaign and recruited many young members from the University of Calgary, where he was studying economics. One of those was a young man named John Weissenberger, who introduced him to the neo-conservative policies of William F. Buckley.

When Harper joined Jim Hawkes in Ottawa as his legislative assistant, Weissenberger looked after things on the local front. However, after working with Hawkes on UI reform (UI, Unemployment Insurance was the forerunner to EI), that never materialized, he became disillusioned and returned to school in Calgary. In a later speech at the founding of the Reform Party, Harper would call for end to "... government financial involvement in the unemployment insurance system..." (5)

But this would not mean the end of politics for Steve Harper. After leaving Jim Hawke's office in 1986, he enrolled in the University of Calgary's master's program, and came to the attention of Robert Mansell with the school of economics. Mansell had been an opponent of Pierre Trudeau's National Energy Program, and saw in young Steve, an ally. So he encourage him to come to an assembly where there was going to be the discussion of creating a new national party, centred in the West, that would be dedicated to advancing western policies.

The keynote speaker was a man by the name of Preston Manning. After they met, Steve caught the bug and began to ...

The wheels were in motion for a right-wing revolution.

Tony Panyi Continued: A Shake Up in the Legislature