Tony Clement, Jim Flaherty and the Adams Mine Scandal 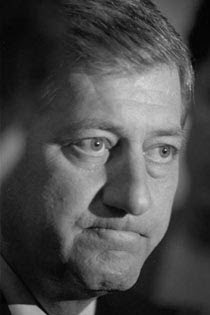 If anything defines the Mike Harris years in Ontario, it is their love of corporate fat cats. The higher up the corporate ladder, the more clout you had with Harris and the boys.

And they would go to extraordinary lengths to accommodate them.

There are lots of examples of this, but one of the best is the Adams Mine scandal.

A Harris friendly company purchased the mine in the hopes of turning into a dump site, but there were grave concerns. The pit's rock walls were unstable, and there was a great potential for contaminants to leak into the groundwater.

Despite this, Harris used every trick in the book to try and make a ton of money for his buddies, even selling them 2000 acres of crown land at rock bottom prices. Land they had no authority to sell.

Public Concern Temiskaming is demanding to know how the Conservative government can allow the sale of 2000 acres of Crown Land near the Adams Mine to a company that may not hold title to the Adams Mine property. The Conservatives had justified the secret sale of Crown Land to the Cortellucci Group on the basis of the Cortellucci s claim of ownership over the adjacent Adams Mine property. But Cortellucci s claim to title is now subject of a major lawsuit. The Cortellucci Group have been named in a $10 million suit by waste giant CWS (Canada Waste Services) over control of the Adams Mine site. Charlie Angus of PCT says the lawsuit raises major questions about the government s attempt to sell the Crown Land at the surprisingly low price of $22 an acre.

You just can t sell buffer land to people who don t have clear title to the original property. I know the Cortellucci s are the biggest campaign donors to Ernie Eves, and I know the government has been trying to push this sweetheart deal through without any public input, but surely, the issue of who actually owns title to the land has to be addressed before any sale is allowed, stated Angus.

The CWS lawsuit alleges that dump promoter Notre Development engaged in the purported sale of the Adams Mine site to the Cortellucci Group even though CWS had a $4.6 million lien on the property, as well as a right of first refusal over any new Adams Mine dealings. Angus says the failure of the Conservatives to address the issue of title at the Adams Mine is just the latest in a series of politically-inspired gaffes over the Crown Land deal. There s been a smell about this secret land deal and it s not just garbage. This is a government that is hell bent on trashing public process and carrying out an unjustified fire sale of Crown Land just so that Tory developers can make hundreds of millions of dollars by bringing back the Adams Mine. (1)

And this was not the first time that the Cortellucci Group were given preferential treatment.

Mr Dwight Duncan (Windsor-St Clair): My question is to the Minister of the Environment and Municipal Affairs. Earlier this month, your colleague Mr Gilchrist resigned from cabinet as a result of a police investigation into allegations that government policy was for sale for the price of $25,000. You, sir, wrote a letter clearly attempting to influence a decision of the Ontario Municipal Board on behalf of developers with clear financial ties to your party. In fact, Jay-M Holdings contributed over $15,000 to your party.

Minister, you're aware that a number of other developers have a great interest in the Oak Ridges moraine and they too have a great potential to gain from your involvement. To what extent was your interference prompted by financial contributions to your party and to what extent are you prepared to stand up today and put a freeze on the Oak Ridges moraine to ensure that proper development takes place over time?

Hon Tony Clement (Minister of the Environment, Minister of Municipal Affairs and Housing): I thank the honourable member for the question and would say to him, as I said in this House last week as well, that the letter he makes reference to was not a letter to the OMB; it was not a letter to any member of the OMB. It was a letter to the regional chair. It did not take a position on the issue before the OMB. It took a position defending a piece of legislation over which I have carriage. It was advising him of the letter of the law and in no way was it an attempt to in any way influence a quasi-judicial tribunal. It was not even written about an issue that the tribunal had carriage of. So I disagree with his characterization.

In terms of who gave what to whom, I know that all political parties receive donations from individuals. I'm aware that our party has been the most successful at that because we have the best record for the people of Ontario, but it had no impact on my decision to write a letter or not to write a letter. Mr Duncan: According to a report prepared by noted York University professor Robert MacDermid, 28 companies with links to the Cortellucci and Montemarano Development Group made 209 contributions to your party, totalling $335,000,
between 1995 and 1997. That same group of companies made no contributions to this political party. One of those companies, is Fernbrook Homes Ltd. Let me read to you an ad about Fernbrook Homes, and I quote this from their ad which is readily available on the Internet: "Now previewing, a private, gated community overlooking ... the Oak Ridges moraine." Can you confirm that this is the same Fernbrook Homes Ltd which is tied to the Cortellucci and Montemarano group of companies who made 209 contributions to your party totalling $335,000? (2)

The Cortellucci Group would end up contributing almost a million dollars to the party, including $47,000 to Jim Flaherty's leadership run and $40,000 to Tony Clement's. (3)

There is no doubt Cortellucci's Tory connections run deep, as do his pockets. Since 1995, the Cortellucci group of firms have donated almost $1 million to the party and played host to one of the marquee fundraising events on the Tory calendar a dinner every fall that brings in more than $300,000 in one evening. The $900,000 in donations to the party made up until 2001 represent the largest amount of money to come from any one company or group of companies with common ownership, outpacing even the firms owned by Peter Munk and the Barrick Gold fortune. Donations made since midway through 2001 are not yet publicly available.

Major banks, by comparison, have donated roughly between $200,000 and $250,000 to the Tories in the past eight years. The fundraiser primarily draws developers and builders and was first championed by the late Tory cabinet minister and successful car salesman Al Palladini. Insiders say it was Palladini, who represented the riding of Vaughan-King-Aurora, who brought Cortellucci and his business partner, Saverio Montemarano, into the Tory fold and urged Cortellucci to make friends with former premier Mike Harris.

Harris and Cortellucci were especially close, Tories say, adding the developer has yet to form any sort of personal relationship with Premier Ernie Eves. (4)

And not just the provincial conservatives:

[Cortellucci] also hosts a string of annual fundraisers for cabinet ministers, federal Tory leaders and Canadian Alliance politicians. In 2000, Cortellucci donated $100,000 to the Canadian Alliance under then-leader Stockwell Day, according to York University professor Robert MacDermid. On the development side, Cortellucci, along with his brother Nick, owns a string of home building companies and firms that do the excavating and grading for new subdivisions. (4)

Harris tried everything from loosening environmental standards, to creating a crisis so that he could assume control of Toronto. But in the end, the dump site did not materialize, but Clement did learn how to play the game.

Tony Clement Goes on Safari to the U.S. to Bag Oil Sell Out

When fellow MP Gerry Ritz launched his one man comedy tour during the Listeriosis outbreak, our Minister of Health. Tony Clement, was nowhere to be found.

Turns out he was in the United States protecting the 'proportionality' clause in the NAFTA agreement. This clause is good for the U.S. but could be devastating to Canada.

According to the Parkland Institute:

This obscure-sounding clause essentially states that, when it comes to energy, no Canadian government can take any action which would reduce the proportion of our total energy supply which we make available to the United States from the average proportion over the last 36 months.

In other words, if over the last 36 months we have exported just under 50 per cent of our available oil (including domestic production and imports) to the United States—and we have—then no government in Canada can do anything which would result in us making less than two thirds of our total oil supply available to the US.

...this clause seriously jeopardizes our own energy security in this country, and severely hampers our government’s ability to set our own energy policies. ... For example, if a natural disaster were to hit eastern Canada tomorrow, our government could not say that we will cut oil or gas exports to the US by 10 per cent in order to increase the oil and gas available for disaster relief in Canada. (5)

And According to the Dominion:

As the US election campaign kicks into overdrive, Canadian politicians and oil executives are stepping up lobbying efforts to make sure whoever controls the White House keeps purchasing notoriously dirty oil from the Alberta tar sands.

Executives from energy company Nexen Inc., which has major investments in northern Alberta's heavy oil industry, and Tony Clement, chair of a Canadian cabinet committee on energy security, met with Democratic candidate Barack Obama's top energy advisor Jason Grumet in late August to cement the "energy partnership" during the Democratic National Convention in Denver, Colorado.In addition to official political pressure from Canadian cabinet ministers attempting to force Obama's hand on the tar sands, the oil industry has hired high-powered lobbyists of its own. Gordon Giffin**, a former US ambassador to Canada, is now a registered lobbyist in Washington for the energy firm Nexen Inc.(6)

The Canadian people will always come last with this government.

*Charlie Angus is now an NDP MP, and is doing an excellent job.

1. Legal Battle Raises Questions About Cortellucci's Adams Mine Deal, ADAMS MINE COALITION, May 8, 2003

3. Government accused of secret land deal, By Richard Mackie, The Globe and Mail, May 8, 2003

6. Canada's Tar Lobby: Tar Sands Lobbyists Focus on US Democrats, By Chris Arsenault, The Dominion, September 8, 2008
Posted by Emily Dee at 5:51 AM