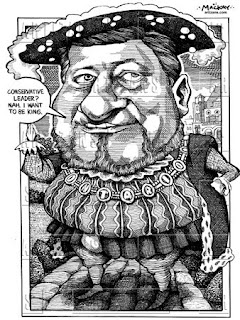 In the video at the bottom of this page you'll hear Mike Harris insider, and long time Tony Clement colleague, Leslie Noble; suggest that Harris could not have been all bad, otherwise he would never have been re-elected in 1999.

But there were three contributing factors to his 1999 victory:

1. All Kinds of Money

One thing we keep hearing about the Harper Neoconservatives, is how much money they have and their ability to fund raise. And while they will try and lead you to believe that the majority of their donations come from ordinary Canadians, that is not true. Their largest backers are the corporations and wealthy Canadians who stand to gain the most from the Neoconservative agenda.

And like Mike Harris, Stephen Harper changed the rules for political contributions, to try and bankrupt the opposition, while they cleverly used non-profit and religious organization to rake in cash on their behalf.

One good example of this is Jim Flaherty's supporter and friend Charles McVety, head of Canadian Christian College. He has set up several religious front groups, many of which are political. He does separate the political ones by stating that no tax receipt is allowed:

We need your financial support to continue fighting for family, child protection, democracy, justice, religious freedoms, and political accountability. Please donate $100 to the Building the Future campaign. Help us help you influence policy and law. NOTE: Due to CFAC's political actions to support family, religious freedom and democracy, Revenue Canada will not allow us to issue charitable tax receipts. (1)

However, no matter what group you decide to donate to, they all go to the same place:

Press the button at McVety’s Word.ca TV show, shown on The Miracle Network and it leads to the donations page for the "Institute for Canadian Values" seeking new members (annual fee to join, $35.00) and 'will accept donations'.The Institute for Canadian Values is not a registered charity and is as political as The Canadian Family Coalition. Of course they are all housed in Christian College ... here is another interesting issue. If our donor gives through the the main ICV site hoping to support the work of that politically minded organization, how would McVety’s staff know NOT to send her a tax receipt that would go for a donation to the college? Would a receipt be sent anyway? (1)

So by having the funds all go to one place, whether earmarked for the political or the charitable, they are able to launder political money and issue receipts that would not be allowed otherwise.

That's just one example to show how easily it's done. And Mike Harris did adopt the "family values" crowd.

Advocacy group activity in 1999 also reached record levels. At least 29 groups took part in the campaign and together spent well over $6 million, more than both the Liberals and NDP. The TV advertising of the main advocacy groups was as heavy or heavier than what the NDP managed to buy on a sample of 15 TV stations. (1)

But Harris's system to generate larger amounts of money was a bit more transparent.

Party contribution data demonstrate that the government's near doubling of the legal limit on contributions to political parties in an election year (from $14,000 to $25,000) was prompted by the Tories' dependency on contributions from wealthy individuals and large corporations who give the maximum donation possible. The higher limits on contributions brought the Tories an additional $2.2 million, while the Liberals took in $277,000 and the NDP $103,000 as a direct result of the changes.

To almost all Ontarians, the higher contribution limits are irrelevant because they cannot afford to donate such large sums ... [Robert] MacDermid concludes that both previous and existing contribution caps are not a restraint on, but rather a licence for, the very wealthy and corporate interests to try to influence government. (2)

Mike Harris himself bragged that he had the support of 100 corporations, many of whom gained enormously from the neoconservative agenda. And they certainly helped to influence the election results:

More than two-thirds of the money the Conservative central campaign raised came from corporations. MacDermid calculates that 16 per cent of all the money raised came from just 19 corporate conglomerates. For example, TrizecHahn and its subsidiary Barrick Gold made 17 contributions worth a total of $121,000, and the Latner conglomerate, which includes companies such as Dynacare, Greenwin Properties and Shiplake Investments, gave over $100,000. Over all of the contribution periods in 1999, TrizecHahn and related companies gave to the Tories $255,000, the Cortellucci and Montemarano companies $254,000 and Latner companies $220,000. (2)

2. When First We Practice to Deceive

York University political scientist Robert MacDermid says the Tories are operating on a permanent campaign footing, helped by changes to the Elections Act and the Election Finances Act last year that have given them an electoral edge unseen in the history of Ontario politics. In his recently released paper, Changing Electoral Politics in Ontario: The 1999 Provincial Election, MacDermid reveals how these election law changes gave the Tories an unfair advantage in the 1999 provincial election campaign. And he argues that the Harris government's extensive use of government advertising and Conservative Party pre-campaign* advertising has rendered controls on campaign spending meaningless. (2)

They also shortened the period of time for campaigning which benefited them immensely:

And they reduced the number of seats, claiming that it was a cost cutting measure but instead just erased seats they knew they couldn't win:

The government's 21 per cent reduction in the number of MPPs, from 130 to 103, has resulted in few cost savings to the taxpayer because of increased members' spending and a projected salary increase. MacDermid argues that this measure has in fact cost Ontario citizens, reducing their chances of receiving timely services and assistance from their elected representative. (1)

In their book: The provincial state in Canada, Keith Brownsey and Michael Howlett, also wrote of the Harris government:

"As in 1995, the Tory campaign was a well-executed, generously funded and probably the most undemocratic Electoral campaign that post-war Ontario had witnessed." (3)

But what probably factored the heaviest into the Mike Harris victory was the abuse of our tax dollars for self promotion.**

We need to watch for some of this stuff in both the next federal election and the next Ontario provincial one, now that Tim Hudak, Mike Harris's protege is heading up the party.

Tony Clement, Jim Flaherty and the Adams Mine Scandal

*The Harper government was the first in Canadian history to run attack ads against their opponents outside of an election campaign.

**Harris's chief of staff, Guy Giorno was behind this advertising campaign at our expense. He is now Stephen Harper's chief of staff and apparently the "brains" behind the Canada Actions plan and the expenditure of tens of millions of dollars on self-promotion ads and signs