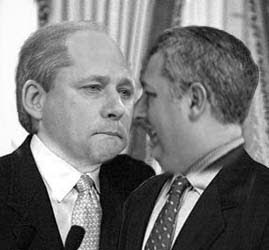 That is what is so offensive about changing the rules to reinforce the continual power in the executive branch of this government. Even their own backbenchers, as I quoted, agree with that. There's too much power in Mike Harris's office. I think that's why they're complaining. I think the frustration of the member for Durham was really about that, that they have nothing to do because everything is orchestrated from the back room by the whiz kids. They decide what they say, when they say it, where they go. Everything is decided by, as I said before with the ommissions, unelected, appointed mercenaries that nobody sees. Who has ever seen this person Guy Giorno? Here's the guy making all the decisions around here. Who has ever seen this person? Is there such a person? (1)

Unfortunately there was and is such a person who is once again trying to push through an Omnibus Bill that will be just as devastating to this country as his Omnibus Bill was for Ontario during the Mike Harris years.

This time he's promising an election. Dare we dream? Can we finally get rid of Harper and his puppet master?

The Tories are threatening a fall election after opposition senators stripped contentious provisions from the Harper government's massive budget implementation bill. Senator Doug Finley, the Tory campaign director, said a fall election is a distinct possibility if senators refuse to pass the bill as is. "Absolutely," Finley said in an interview moments after opposition members on the Senate finance committee voted to erase four controversial measures from the budget bill.

"I can't think of anything more important than what's in that budget bill." The full Senate could vote to overturn the changes made by the finance committee but it's not certain the Conservatives have the numbers to do that. While the Tories now dominate the upper chamber, they do not have an absolute majority.

Giorno wants to sell our atomic energy. In most countries that would be an act of treason. He also wants to privatize Canada Post. This man must be stopped. We stopped him in Ontario, though not before he almost destroyed us.

Last election Giorno kept Harper in a bubble. He so loves to play 'daddy'. He dressed up Mikey too.

But Guy Giorno, who runs the government from the back rooms, decided that he wanted to see rule changes in this House. You see, the House was working too democratically to suit the backroom boys and the government, the people who are impatient with the democratic process, the people who feel the opposition is just some irritant to be shoved out of the way, the people who believe that if there's any opposition out there, they must be misguided or misled people. They wanted to see the rule changes brought through the House instead of dealing with legislation.

In the dying days of the spring session, which started last January, by the way, and ended in June some time, I can well recall those of us in opposition saying, "Bring forward your legislation." But no, the government House leader of the day, Mr. Johnson, was instructed by Guy Giorno and those who have the real control in this government to deal with changing the rules of the Legislature to grease the skids for the government to get its legislation through. So we saw what can only be referred to as draconian and drastic changes to the procedural rules of this House, rules which, as the member for Scarborough-Ellesmere says, restrict the debate in the Legislature. (2)

It's time Giorno either ran for office or got the hell out of town. This Omnibus bill must be stopped. Period.