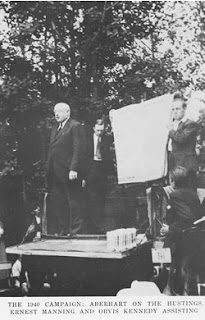 In 1956, the Social Credit national organizer Orvis Kennedy, was addressing a crowd at a community hall in Nokomis, Saskatchewan, when he stated: "I think if they had left Hitler alone, he'd have been alright." His statement was part of a broader speech in which he condemned communists and international financiers for their world-wide manipulations.

The media immediately jumped on it. For a decade or so, Social Credit had been trying to reinvent itself from the party of extremists, to a moderate conservative option.

The Saskatoon Star-Phoenix claimed that Kennedy's statement was "strange and disquieting. But it is no stranger and no more disquieting than many other things about the Social Credit organization." The Calgary Herald remarked: "no better summation of the basic, sinister philosophy of Social Credit has been made openly in recent years. With Social Credit's move toward respectability, and its effort to woo financial support from big interests, some people have forgotten this ... No wonder Mr. Kennedy sees no harm in Hitler. Social Credit and Hitlerism are 'spiritual' soul-mates." (1)

Was this a fair assessment? Maybe not. However, for Canada I suppose Social Credit was the closest thing to fascism we had (other than of course the short-lived Fascist Party of Canada). In Lloyd Mackey's book, Like Father, Like Son, he addresses the many accusations of fascism during Ernest Manning's time:

Finkel's The Social Credit Phenomenon in Alberta some of the ideological issues that had been part of the 1944 election rhetoric are explored. Manning never made too fine a point of it, but he and some of his MLAs let it be known that they believed socialism had more of a connection with fascism and Nazism than did Social Credit-style conservatism. At the time, of course, young Canadian men were fighting the Nazis in Europe. Stung by the charges against them with respect to their views on the banking system, the Socreds began to remind Albertans that "Nazi" was short for "National Socialism." (2)

However, Ernest Manning like many others were wrong. Adolf Hitler hated socialism.

Journalist Konrad Heiden who followed Hitler's career from his days in the Munich beer halls, wrote several books on the man and his party long before the Holocaust was brought to light.

In 1923 he joined the staff of the Frankfurter Zeitung, with the special assignment of covering the National Socialist movement in Munich. He is credited with coining the word "Nazi" — as a term of contempt, because in Bavaria "nazi" was a slang term for a country bumpkin. (3)

Hitler only added 'socialist' to the German Workers Party to appeal to the masses. His party was originally referred to as the Fascist Brown Shirts.

What is interesting though, is that Social Credit got some help from Canada's Communist Party back in the early days, and in fact contributed to the one and only election victory of Orvis Kennedy, the man who suggested that Hitler would have been OK if they'd just left him alone.

When William Aberhart first decided to push for the adoption of social credit principles to help Alberta to weather the Depression, his motives were pure. One of his former students had committed suicide because of his dire straits, leaving him wondering why there was so much poverty in the 'midst of plenty'. So Social Credit principles were originally about sharing the wealth.

I think that if Aberhart had still been alive when oil was struck at Leduc in 1947, there would have been a fairer distribution of the wealth. For all of his faults, he was a caring man. I also believe that had oil not been discovered, Ernest Manning would not have been premier for as long as he was. He was running out of ideas by 1947.

And a decade earlier, in 1937, the Party was in trouble. The Bankers' Toadies Incident was threatening to topple the government. This referred to pamphlets that were printed (at taxpayers' expense. Sound familiar?) that read: My child, you should NEVER say hard or unkind things about Bankers' Toadies. God made snakes, slugs, snails and other creepy-crawly, treacherous, and poisonous things. NEVER, therefore, abuse them—just exterminate them! Along with this was a list of nine "toadies" that needed to be exterminated.

One of them was the leader of the Conservative Party, Dave Duggan, who brought up the issue in legislature. The Social Credit offices were raided and the two men responsible arrested. There was concern that someone could take the "extermination" seriously and take matters into their own hands.

Aberhart did everything in his power to stop the trial from going through, even firing the Crown Prosecutor, but the two men were charged and imprisoned. In the meantime, the opposition parties had formed a coalition to oust Aberhart, creating a new party called the People's League.

The story drew a lot of press and was brought to the attention of the Communist Party of Canada, and they called for a "united front" against the People's League, feeling more solidarity with the Socreds, than the parties representing "big business".(4)

On March 21, 1938, a federal by-election was being held in East Edmonton, and hoping to gain support for the Liberals, then prime minister, William Lyon Mackenzie King, announced the release of the one socred still in jail, Joseph Unwin.

Upon receiving the news of his impending release, the Socred M.L.A.s broke into jubilation and performed a snake-dance in the Legislature. The Liberals' hopes of winning support, however, failed. Social Credit candidate Orvis Kennedy won the election, and that night a huge victory rally was held in honour of Kennedy and Unwin. Joining them on the platform was Jan Lakeman, leader of the Communist Party in Edmonton, who had helped with the Social Credit campaign. Lakeman was thanked by Kennedy for his support, and Lakeman in turn thanked the voters "for giving an overwhelming defeat to the forces of reaction in the dominion.'' Leslie Morris, secretary of the Canadian Communist Party and correspondent for Pravda, who had also helped in the campaign, took part in the victory celebrations. (5)

Manning would later purge the party of 'socialists' and adopt a very pro-business attitude, often speaking out against socialism that threatened his centralized power. He also believed that capitalism was a better option, a true neoconservative before neoconservatism became a household word.

This evangelical view of humans as essentially alone in the struggle for salvation leads to a gospel of the individual and also, naturally enough, "in the world" to the gospel of free enterprise and capitalism. It compels many of its adherents to elevate capitalism to the level of Biblical command. Richard Neuhaus, an American evangelist, says it is "imperative for Christians to support capitalism. It is an amazing thing ... It comes from the grace of God."

This fundamentalist view commands its adherents to promote capitalism as the "best hope" of the poor. According to Reverend Ben Smillie, using Ernest Manning as an example, these evangelical sects "have religiously sanctified the privileges of the economically powerful." The multi-millionaire Ernest Manning could denounce the "Godless materialism" of the communist system, while materialism sanctioned by God allowed him to "equate [his] wealth with the blessing of God."

The party would continue it's reputation for intolerance and anti-Semitism would often rear it's ugly head. But the revisionist history that gives Ernest Manning saintly powers, is mostly the stuff of legends, and as Helen Hayes once said: Legends die hard. They survive as truth rarely does.