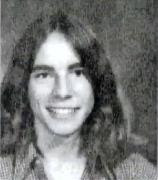 On May 28, 1975; 16-year-old Michael Slobodian entered the Brampton Centennial Secondary School armed with two rifles in a guitar case, with the intention of killing his physics teacher, who had given him a failing grade. Michael wanted to go to medical school, and with those hopes dashed, he felt he had nothing left.

The teacher was not available, so he entered the boys' washroom and opened fire. The first to be killed was his friend John Slinger. Slobodian next entered an art classroom, killed English teacher Margaret Wright, and wounded 13 students. He then stepped out into the hallway and turned the gun on himself. The whole thing was over in a matter of minutes. (1)

Witnesses to the carnage were the two daughters of then Ontario premier William Davis.

At the time, Canada's gun laws were pretty lax, but Davis was determined to change that. So he had his attorney-general, John Clement, who had only been on the job for a few months, to connect with the federal government to see what could be done.

Mr. Clement would not win the next election, but the wheels were set in motion. Pat and Berwick Slinger, parents of the murdered boy who was described as Slobodian's only friend, testified at the inquest.

As a result Bill C-51 was passed in 1977, and came into affect on January 1, 1978: The two biggest changes included requirements for Firearms Acquisition Certificates (FACs) and requirements for Firearms and Ammunition Business Permits. Other changes included provisions dealing with new offences, search and seizure powers, increased penalties, and new definitions for prohibited and restricted weapons. Fully automatic weapons became classified as prohibited firearms unless they had been registered as restricted weapons before January 1, 1978. Individuals could no longer carry a restricted weapon to protect property. Mandatory minimum sentences were re-introduced. This time, they were in the form of a 1-14 year consecutive sentence for the actual use (not mere possession) of a firearm to commit an indictable offence. (Wikipedia)

John Twining Clement's political career would only last from October 21, 1971 to September 17, 1975, but it would have more of an impact than the duration would suggest. Not only did he help to create tougher gun laws, but he also met Carol Panayi, a single mom who was employed as a secretary to Ontario MPP Bill Hodgson. (3)

The couple would be married in 1979 and Carol's only child Anthony, would take his stepfather's name. And not long after, that stepson would set out to destroy everything that Bill Davis stood for, though it would be a decade and a half before Tony Clement was in a position to enact real change, when he joined the Common Sense Revolution of Mike Harris, that turned out to be neither common nor made much sense at all.