Tony Clement and 101 Things to do With Cat Food

A few years ago, I was having coffee with a friend and she was discussing how hard it was for her to manage as a single mom. This was during the Mike Harris era, and despite the fact that he boasted about cutting income tax by 30%, he offset it with user fees and reductions in services, so the net gain was minimal.

She lamented that she had been unable to save money and said that when she retired she would probably end up in a single room, reduced to eating cat food.

Not wanting her to stress, I patted her hand and said "Don't worry, Chris. You'll never be able to afford cat food."

In Mike Harris's Ontario, the very rich got richer, while everyone else was lucky to get by. And if you complained, he had very big riot police, ready to make you forget you were ever hungry.

And the cat food comment, was not unique as there were many reports that seniors had been reduced to eating it for nourishment. Whether true or not, it was certainly possible.

At the bottom of this page is an episode of a recent Steve Paikin show on TVOntario, where a panel is discussing whether or not the Common Sense Revolution had been a success. I can certainly see what many people have been suggesting lately, that our media is tipping to the right. Usually Paikin is a pretty enlightened guy, and yet to debate the issue, he has a former Harris cabinet minister, a former Harris "Whiz Kid" with close ties to Guy Giorno and Tony Clement, and a right-wing journalist.

The only offsetting voice is that of Marshall Jarvis from the Ontario English Catholic Teachers' Association. He does a very good job of reminding people that revisionist history is just revisionist history, but the facts are the facts. And the fact is that Mike Harris was a train wreck.

And if we needed a reminder of that, the choice to speak up for Mike, Dave Tsubouchi, will sure jolt our memory.

Dave Tsubouchi was Mike Harris's first Minister of Community and Social Services, who came down with a bad case of political foot in mouth disease. The day he was sworn in, a reporter asked about welfare reform, to which Tsubouchi replied: "I haven't figured out how to be an MPP yet, let alone a cabinet minister."

Unfortunately, he never did figure out how to be either.

But that didn't stop him from adopting the same confrontational attitude as the rest of the caucus, making arbitrary decisions and then refusing to explain himself.

It is difficult at the best of times for marginalized and disadvantaged people to have any public voice. Political participation is traditionally low among people who are already excluded from the social and political mainstream (Jackman 1994). Since the election of the Harris government, Ontario has also seen a truncated democracy specifically around access of the most marginalized people to the political process. The government has closed down various mechanisms that had been established by previous governments to consult with groups particularly affected by changes to social programs. Thus, for example, after the 1995 election Minister of Community and Social Services David Tsubouchi simply refused to meet with the Social Assistance Advisory Council (made up of social assistance recipients and representatives from community agencies) that was supposed to serve as a consultation body to represent recipient perspectives. This left the council no option but to resign. Internal documents indicate that the same ministry has deliberately adopted a policy that it will not consult with advocates and recipients. (1)

Not that the decisions were ever really his to make. All that was handled in the backroom, by people like Guy Giorno Leslie Noble, Tom Long and Deb Hutton (Tim Hudak's wife)

Tsubouchi's job was just to try to justify the actions. Boy did he mess that up.

In the Tories' first year in power, the Social Services minister had caused the government more embarrassment than any other member of executive council. Tsubouchi was kept in cabinet, in part, because he was the only member of a visible minority in the Tory benches, and because Harris accepted that the rookie minister had faced an impossible task.

As minister supposedly responsible for delivering succour to the poorest in society, Tsubouchi's mandate had been, in fact, to increase their hardship. It was he who was charged with slicing the income of welfare recipients by 21.6 per cent; he who was charged with forcing them to work for the money that was left. The situation would have been difficult enough for the most adept and experienced of politicians. But even though Tsubouchi was, in fact, more experienced than most in his caucus, having served on Markham council for six years, he seemed to have learned nothing while there, at least in regard to debate. On the floor of the House, the performance of the bearded, mild-mannered amateur poet and actor was fumbling, repetitive. sometimes almost incoherent. "Well, Mr. Speaker . he would begin, like an actor who had forgotten his lines, desperately improvising while he waited for a prompt. None came.

The opposition would have targeted Social Services as a key area of attack regardless of who held the portfolio. But when it became apparent that Tsubouchi was the weakest actor in the Tory cast, they tore into him with the gusto of undergraduate film critics. (2)

The opposition would joke "That's one man we'll never ask to resign" (3). He was a gift.

But some of his best gaffes were when he was trying to convince those on welfare that they could eat on $ 3.00 a day. And he knew how, or at least he thought he did.

On October 3, 1995, [Bob] Rae rose in the legislature for his first question of the day. The Liberals had already been hammering away at a recent Tsubouchi gaffe; the minister had advised shoppers on welfare that they could absorb his government's cuts by buying dented tins of food or waiting for tuna to go on sale for sixty-nine cents. Now Rae rose, right hand in jacket pocket, as was his custom, and solicitously asked Tsubouchi if he knew just where one might find tuna at such a low, low price.

.... Tsubouchi assured the leader of the third party', that tuna was commonly available at that price. "In fact," he added helpfully, "even if it's not priced at sixty-nine cents, quite often you can make a deal to get it for sixty-nine cents." After a moment's stunned silence, the House erupted. The sounds might have resembled outrage to those listening in on television, but in fact most members were roaring with laughter, including government backbenchers, several of whom looked up at the incredulous reporters in the gallery and shook their heads in woe. The only people not laughing were Tsubouchi and Harris. The premier hunched forward in his chair, staring grimly at his desk. When Speaker Al McLean finally got the House to quiet down, Rae affected an air of bemusement. "I can honestly say I was not anticipating" the response, he told the House, "but I'd like to ask him, when was the last time he bartered for food?"

In the wake of such debacles, the Tories tried to improve the rookie minister's verbal fencing skills, bringing in a communications expert on a $25,000 contract. But her efforts produced little visible effect, and within a few weeks of the tuna incident. Tsubouchi was at it again, this time apologizing to the House after Toronto Star reporter Kelly Toughill pointed out to him that new regulations would cut welfare payments for 115,000 people with disabilities, something the Tories had promised not to do. In his apology Tsubouchi lamely claimed that the cuts were inadvertent. A patently angry Harris berated his own minister in front of reporters. "That's no way to run a government and it better not happen again," he warned. (4)

But the dented tins and tuna were just a warm up.

In response to a question, again by NDP leader Bob Rae, he indicated that he had a shopping list showing how to live within the limits imposed, that he would be happy to share with Mr. Rae. Having publicly announced its existence, Tsubouchi then stalled for weeks before finally giving it privately to Rae, apparently believing he could keep it from the public.

The list was published in most papers and became a topic of debate for several weeks.

Tories attending a fundraiser found their cars pelted with the menu staple [bologna] as they arrived. Diners in posh Toronto restaurants debated whether tuna could be found for less than 69 cents (one businessman claiming he had seen it advertised for a mere 63 cents in Leamington), and a Toronto Sun columnist actually followed the menu for a month and reported on it. Tsubouchi never recovered from this fiasco. He was demoted barely a year after his appointment, to the much less demanding Consumer and Commercial Relations portfolio, and has rarely been heard from since.

And yet here he is singing the praises of the Harris regime, as though he was a prominent participant, and not a laughing stock.

Between he and Al Palledini, we often thought the Ontario Legislature was a spin off of SCTV: 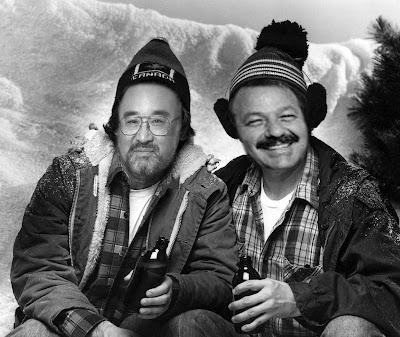 Correcting Some of the Revisionist History

Mr. Jarvis is absolutely correct when he states that the comments made by the other three on the panel were an attempt to rewrite history. Leslie Noble claims that they consulted ordinary Canadians but nothing could be further from the truth. The only consulting done was with Corporations and right-wing fringe groups like the PGIB, the National Citizens Coalition, the Fraser institute and the Canadian Taxpayers Federation.

She also defends Harris's cuts suggesting that they were due to the downloading of services by the federal government. That is true in part, but Brian Mulroney did the same when Bob Rae was premier.

And as for responding to concerns of the public, the agenda for the Common Sense Revolution was contrived at the University of Toronto by a group of young radicals, including Tony Clement (aka: Tony Panayi), Tom Long and Leslie Noble. It had absolutely nothing to do with meeting any one's needs but their own.

And the promotion of the so-called CSR was created by a Republican strategist, Mike Murphy, right down to the 30% tax cut. Bob Rae made mistakes and yes he was inexperienced, but much of his reputation was "created" by the Ontarians For Responsible Government, an offshoot of the National Citizens Coalition.

And yes Mike Harris did win in 1999, but it was through craftiness and deception. I'm doing a separate posting on that.

It's important to understand this for two reasons. The first is that Mike Harris's chief of staff, Guy Giorno is now Stephen Harper's chief of staff, and he is created the same kind of confrontational and secretive administration for Harper as he did for Harris.

The second is that Mike Harris's protege is Tim Hudak, the new leader of the Ontario Conservatives, and we have to make sure that he never gets elected.

Tony Clement: You Want to Sell What?