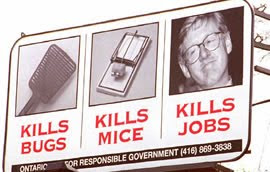 The billboard to the right was designed by Gerry Nicholls when he was running the anti-Bob Rae campaign for Ontarians for Responsible Government, an offshoot of the National Citizens Coalition.

I've read several books on the Mike Harris Revolution and all ignore the influence of these right-wing groups, that played such an important role in the success of the movement.

Colin Brown Jr., son of the founder of the NCC, Colin Brown, was invited to speak to the Ontario legislature in 1997.

And indeed they did. For the entire duration of Bob Rae's premiership, the OFRG did nothing but harass, while building support for a neoconservative takeover.

The National Citizens Coalition, which was started in 1975, on the advice of Preston Manning's father, Ernest Manning; had always been considered to be a right-wing fringe group. But after helping to get Brian Mulroney elected, they began to earn some legitimacy, and with 50 members of Mulroney's caucus belonging to the NCC, it was not too difficult to influence policy.

In 1987, when Stephen Harper, who had joined the NCC in 1980, was helping to start the Reform Party, he worked with the NCC and it's then president, David Somerville. Somerville had been a journalist for the Toronto Sun when Peter Worthington was the editor, so his devotion to right-wing causes was already well tested.

Somerville's connections with the Reform Party were even more direct. He attended virtually all of their assemblies during his term of office as an
observer." At the founding convention of Reform in 1987, he told reporters, "If NCC supporters notice a remarkable similarity between the political agendas of the Reform Party of Canada and the NCC, it may be because an estimated one third of the delegates are NCC supporters." Although he continued to argue the NCC was beholden to no other organization, he nevertheless declared enthusiastically after Preston Manning's speech in 1991 at the Saskatoon convention that "it was conceivable to think of him, for the first time, as Prime Minister Manning." Not surprisingly, an NCC poll released that summer also indicated more than 60 per cent of NCC members outside of Quebec planned to vote Reform.(2)

And while Stephen Harper has been credited with writing policy for the Reform party, most of it was actually cribbed from the NCC handbook. (3) They would also put $ 50,000.00 into his 1993 campaign, that brought him to Ottawa as an MP.

But besides simply being engaged in guerrilla warfare against Bob Rae, the NCC also worked closely with Mike Harris and his team.

In 1994 Somerville was asked to address the Ontario Conservatives' platform committee, the group of whiz kids Mike Harris had assembled for his "Common Sense Revolution." According to a report on his presentation in the NCC's June 1994 Consensus, Somerville urged Harris to "come out strongly in favour of privatization, contracting-out, repeal of pro—labour union laws and immediate action to eliminate the deficit". (2)

Corporate money began to flow, and the debt of the party was gradually reduced.

But it would take more than just the NCC if the Revolution was going to have any success, and just as with the Reform Party, Harris could count on several, including the Fraser Institute, of which he is now a fellow. Michael Walker told Enterprise Magazine in 1995, that he and Mike Harris were regular fishing buddies.

Another important group working behind the scenes was the Progressive Group for Independent Business (PGIB) led by Craig Chandler. In January of 1994, Mike Harris attended a PGIB rally in Hamilton, Ontario, where he stated "I encourage you to join the PGIB is you have not already and demand a restructuring of the public sector to both cut costs and improve services. It is time to go forward with a common-sense plan to unleash the power of the marketplace." and on March 14, 1997, from The Globe and Mail: "...the Calgary-based Progressive Group for Independent Business, a group known as the brains behind Ontario Premier Mike Harris's Common-Sense Revolution. " (4)

The Canadian Taxpayers Federation, then led by Jason Kenney also featured a Harris pledge as part of their literature, and praised him for promising to cut taxes. 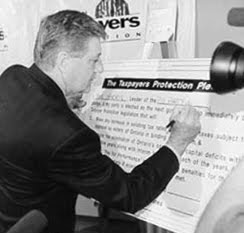 But the most important influence on the success of the Harris Revolution came from south of the border. That coming next.