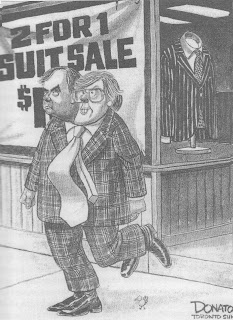 In Ontario, on election night 1985, most of us went to bed believing that the Conservatives were being returned to power, albeit with a slim minority. But what wasn't foreseen, was the strategy of the NDP, under the leadership of Bob Rae, who entered into an informal coalition with the Liberals who had 48 seats to the Tories 52.

As Rae explained, his strategy "was to ensure stability, to show the people that minority government didn't have to constantly teeter on the edge of collapse." (1)

They brought down the government of Frank Miller at the throne speech*, and the NDP agreed not to try to topple Liberal leader David Peterson for two years.

This threw the Tories into disarray, as author Christina Blizzard explains:

By 1985, it was clear to some political observers that four decades of Tory rule were about to end. There was internal party strife, much of it coming from the Ontario Campus Progressive Conservatives in the persons of Tom Long and Tony Clement, who opposed what they saw as Red Tory policies – the SUNCOR bailout and full funding for separate schools. They bitterly denounced changes to the enforcement of the Ontario Human Rights Code tabled by Bob Elgie. The changes included the power to obtain material without a warrant and due process, which Long and Clement considered draconian ...

And then came 1985 – the Tories' very own annus horribilus. It was a year of turmoil, pain, and enormous upheaval for the Conservatives. Premier William G. Davis – Smilin' Bill, Brampton Billy, one of the most respected politicians in Ontario – resigned at Thanksgiving 1984. He'd been leader and premier of the province since 1971, winning general elections in 1971, 1975, 1977, and 1981. (His second and third victories produced minority governments.) (2)

Davis had resigned in October 1984, and:

Immediately, the party was plunged into a feeding frenzy ... This proved both costly and divisive ... The party disintegrated quickly. Frank Miller, Dennis Timbrell, Larry Grossman, and Roy McMurtry squared off for the job. Miller won on the last ballot; Grossman was second. Miller called an election for May 1985 and the party dropped 20 seats ... "It was assumed we were electing a new premier. There was a lot of bitterness, a lot of division, a lot of fighting There were huge, internal battles. The party faithful fought over delegate spots and fundraising, and the leadership candidates fought to make commitments and promises.

The Liberal-NDP accord was a bitter pill to swallow. They weren't used to sitting in opposition and had no desire to remain there long. Frank Miller even put a sign on Peterson's door telling him not to get too comfortable. "We'll be right back." (2) But soon there would be another leadership race and the young radicals from the University of Toronto, including Tony Clement, backed Larry Grossman, who won the title as leader of the official opposition.

But the party remained fractured: "It was bad, really bad for the party," Clement remembers. The Tories were riven with faction and mistrust. (3) And Bob Rae relished in the fact that it "... was the Tories, and not us, who became irrelevant." (4)

Another Election and More Bad News

After the two year agreed to coalition came to an end, David Peterson, riding high on the results of a strong economy, decided to call an election.

In 1985, voters hadn't slam-dunked the Tories out of power. On the contrary, the Conservatives technically won the election. But once the electorate got a better look at the newly made-over David Peterson, with his trendy hairdo and stylish clothes, the new, trendy, and stylish voters in Ontario decided that they really preferred him and the Liberals to the stuffy old guard Tories. By 1987, the voters were willing to do what they hadn't had the temerity to do in 1985 — they swept out the Tories and swept in the Liberals with a huge majority government. (2)

Larry Grossman was defeated in his own riding and decided to step down.

Once again the party was leaderless. And it was broke. Two elections and two leadership conventions had sent it deeply into elections debt, and the Bay Street donations no longer flowed to a party that wasn't even close to the prospect of governing. Worst of all, the Bill Davis Tories were in a state of trauma. Most of the mechanics of the defeated regime—Segal, Atkins, Tory, Laschinger—either headed into corporate life or headed up the 401 to Ottawa, where the Conservatives were still in control. -The grownups basically left—retired, quit, lost interest, or went to Ottawa," says Campbell. The only Tories left in the provincial party were either over fifty-five or under thirty.

With the support of the latter, [Tom] Long became party president. "It was horrible," he remembers. "If I had understood how much psychic damage had been done to the party through those two leadership conventions, I never would have run for president .... There were people who were not only angry with one another, they would not deal with one another. They were mindlessly vindictive and spiteful." (3)

But it wasn't all bad, from the perspective of the young radicals. Leslie Noble, who had joined the group in 1983, had gone to work for Larry Grossman after he won the leadership.

"I remember coming from a meeting with Larry, and he introduced me to Mike [Harris], and when we went into his office Larry said, 'You keep your eye on that guy. He's the next leader of the party. He's the smartest man in caucus, and he's going to places", she recalls. "From that moment on I started to pay attention to this guy." (3)

*In 2004 after Paul Martin won a minority in federal Parliament, the leader of the opposition, Stephen Harper, possibly borrowing from Rae's playbook, formed a coalition to take Martin down at the throne speech. Martin went to the Governor General seeking another election, but she turned him down and told him to fix it or she would allow the Opposition parties to govern. He reached a consensus but Stephen Harper would continue to push the idea of a coalition throughout the next year, as revealed by the following video. Stockwell Day tried the same thing leading up to the 2000 election, but it backfired when Jean Chretien won another majority.