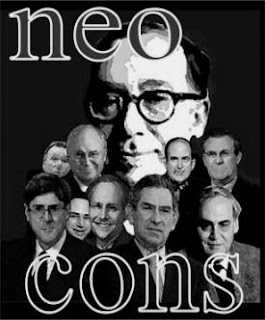 Leo Strauss, with the help of his friend Karl Schmitt, was exiled to Paris, thereby escaping the Holocaust. In June 0f 1933 he married Marie (Miriam) Bernsohn, a widow with a young child, Thomas Petri, whom he adopted.

They managed to escape to England when Paris fell to the Nazis, but his family in Germany were not so fortunate.

Leo Strauss's father, Hugo Strauss, died in the spring of 1942 just before the deportation of Kirchhain's Jewry. His stepmother and the rest of his immediate family that stayed in Germany were soon killed after being deported to death camps in the east. (1)

Strauss's only sibling, Bettina Strauss moved to Cairo where she married Paul Kraus in 1936.

Kraus was a Czech-born Jewish scholar of medieval Islamic philosophy, science, and medicine as well as the Bible and archaeology. Leo Strauss and Paul Kraus became acquainted in the late 1920s and early 1930s in Berlin.' Bettina and Paul traveled to Palestine, Lebanon, and Egypt for research and possible academic appointments. Bettina died in January 1942 while giving birth to Jenny Ann Kraus in Cairo. Just two years after Bettina's death, Paul Kraus committed suicide.' Strauss adopted his four-year-old niece, Jenny, and raised her as his own daughter in the United States . (1)

Ironically, Leo Strauss had once wanted to join the Nazi Party, though he would blame the fall of the Weimar Republic, and liberalism in general, for the ruination of Germany.

The Weimar never really had a chance. The monarchy fell during the war, leaving the country in disarray. Trying to rebuild and remake Germany into a democracy, at a time when the German people were looking for someone to lead them out of the darkness, proved impossible, making the time right for the image of a powerful leader: Adolf Hitler.

Strauss moved to the United States in 1937, becoming a citizen in 1944. In 1949, he became a professor of political science at the University of Chicago, where he received, for the first time in his life, a good wage. And as part of this infamous Chicago School, he would help to reshape American politics, and create a movement now known as Neoconservativism.

And perhaps without realising it, Ernest Manning had ascribed to the philosophy.

The Republicanism of Ernest Manning

Since the Leduc oil gusher, of 1947, Ernest Manning abandoned Social Credit principles and moved Alberta to the right. Inspired by the Americans, he adopted a Republican style political system, that fit with his moral and religious views.

The United States — its culture, political institutions, and doctrine of individualism — also had an enormous impact on political life and attitudes in Alberta. That influence is strongly demonstrated in the history and development of the Social Credit Party, which Ernest Manning ran for so many years: a free-enterprise party extolling the virtues of individual liberty, the traditional family, and the supremacy of God. (2)

Social Credit had been pretty close to socialism, with an attempt to fight against "poverty in the midst of plenty". Manning, on the other hand, abhorred and feared socialism, and believed that capitalism and the free market were the best defenses.

This belief would channel to his son Preston, when he started the Reform Party and on to his lieutenant, Stephen Harper.

And though Leo Strauss died in 1973, his legacy lives on in a movement that is fueled by deception, religious fervour and unbridled nationalism. The key elements that Strauss suggested were necessary, for a government to be successful.