By 1990, the Ontario Conservatives with a new party leader and new president, were in trouble.

There was good news and bad news for Brampton South MPP* Tony Clement right after the 1990 election. The good news was that he'd been elected party
president. The bad news came during his first day on the job, when he received a phone call from the party's chief financial officer. "Congratulations on becoming party president," said the CFO. "I just want to let you know that we're $5.4 million in debt. That means before we pay a nickel on staff, before we pay a nickel on brochures, anything, we have to pay in interest $625,000 a year —$13,000 a week. And right now we have about $4,000 in the bank."

That was the financial state of the Big Blue Machine following the 1990 leadership campaign. Mike Harris had inherited a massive debt, racked up during all those leadership campaigns. After the fall election of 1990, things looked grim for the Tories. With the party consistently at 15 or 20 percent in the polls, the $5.4 million debt sat like a huge boulder on a road, blocking any chance the Tories may have had of rejuvenating themselves. That's when Mike Harris made one of the toughest decisions of his political career — he shut down party headquarters. It was the only thing the party could do, but it meant that the once mighty Big Blue Tory Machine of Ontario no longer existed. Traditional Conservatives were aghast. It was unthinkable for them; it was akin to the Albany Club running out of twelve-year-old scotch. The Tories had no party headquarters and no paid political staff. (1)

The election held September 6, 1990, put the Conservatives in third place with 20 seats. But the results of this election would prove to be a blessing in disguise, because it gave Bob Rae's NDP a majority government, at a time when Ontario was heading into a severe recession.

But this also meant that a socialist government had taken the helm, and there was no way corporate Canada was going to allow this, so their advocacy groups swung into action. Leading the charge was the National Citizens Coalition, who created a spin-off group called Ontarians for Responsible Government, headed up by Stephen Harper's** former VP when he himself was president of the NCC, Gerry Nicholls.

Throughout the government of NDP leader Bob Rae, Gerry headed the NCC project group, “Ontarians for Responsible Government”. Among numerous activities this group erected anti-Rae billboards throughout the province. This style of billboard advocacy was imitated nationwide and was featured in Campaigns and Elections magazine. Besides overseeing and co-coordinating the NCC's overall political and communication strategies, Gerry also acted as the group’s media spokesman, edited its newsletters and wrote its op-eds, news releases and fundraising letters. (2) 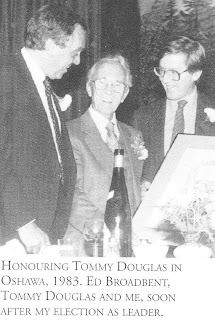 The NCC’s Golden Age occurred in the early- to mid-1990s, when Bob Rae was the NDP Premier of Ontario. To be blunt, Rae was a disaster. His economic platform of high taxes, big spending, and massive deficits was wrecking the economy. Of course, this made him the perfect poster boy for the NCC. We lambasted his ruinous, socialist agenda with newspaper ads, radio commercials, TV spots, and billboards. At one point, we dubbed him the “Buffalo Business Booster Man of the Year,” because we believed that his onerous taxes were driving Ontario businesses to New York State. Another time, we put up a billboard which featured three photos: one of a mousetrap, labeled “Mouse Killer,” another of a fly swatter (“Bug Killer”), and, finally, a photo of Rae (“Job Killer”).

These ad campaigns generated a lot of publicity for our organization and attracted a lot of people to join the NCC as paying members. Rae’s ineptitude made it easier than ever for us to mount fundraising campaigns. Basically, all I had to do was write letters to people saying “We want to dump Bob Rae,” and they would send me back huge cheques to pay for more anti-NDP ad campaigns. In fact, I must confess to feeling something akin to pleasure — albeit slightly guilt-laden pleasure — in those days of bad economic news. After all, the worse things got for Ontario’s economy, the better things got for us.

What all this goes to show is that if you want to make a living from politics in any way, even if you are just engaging in advocacy work, you need a bad guy or a villain. To mobilize your supporters, you have to be able to point to somebody and say, “Hey, there’s a scary guy out there whose policies are going to hurt you. That’s why you need us.” (3)

Actually Bob Rae's tenure was not as bad as history suggests. He himself admits that he made mistakes, in large part due to inexperience, but he also accomplished a great deal.

The National Citizens Coalition put up billboards with Rae and Stalin side by side, and rich stockbrokers led a protest parade to Queen's Park and shouted for Rae's head. He never had a chance. Bay Street and big business shunned him and his government like they were lepers. Still, Rae managed to save the jobs of the Algoma Steel Workers in Sault Ste. Marie, Ont., and the jobs of the workers in the De Havilland plant in Toronto. The media was hostile to Rae's government. Today the media keeps talking about his NDP government, but never mention that he presided over the worst Ontario recession since the Great Depression. (4)

And those hostile attacks were often personal, and understandably rattled the premier.

The National Citizens'Coalition, a shadowy front group with big money, had already rented a billboard just around the corner from Queen's Park, displaying posters worthy of Allende's Chile. The huffing and puffing of right-wing types who could never bring themselves to go to Ottawa to worry about Mulroney and Wilson's deficits (much higher and far more out of control than ours) was set in permanent motion. They now have billboards fawning over Mike Harris. (5)

Rae was right. Mulroney had created the largest deficit in Canadian history. The largest of course until Jim Flaherty and Stephen Harper would blow that record out of the water. Why was Rae's deficit, that helped to save jobs, wrong; and yet the Harper government's good when it has done little to protect jobs? Employment figures are misleading because many people are opting for part-time, or much lower paying jobs out of necessity.

It's for this reason that I don't think Jack Layton could ever be prime minister because these "shadowy" groups financed by the corporate world simply won't allow it. It's too bad because I really like Jack Layton and loved Ed Broadbent when he headed the party.

*Tony Clement was not yet MPP. He wasn't elected to the Legislative Assembly of Ontario until 1995.

2. About Gerry from Gerry Nicholl's blog.