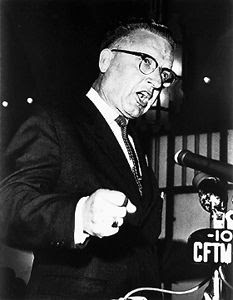 A CULTURE OF DEFIANCE: History of the Reform-Conservative Party of Canada
By the late 1950's*, the federal Social Credit wing was in trouble. The Diefenbaker sweep of 1958 knocked many out and they were never able to fully recover.
Finally in 1962, they decided to form a coalition with a Quebec nationalist party, the Ralliement des créditistes, then led by charismatic leader, David Réal Caouette.

After the Percy Young incident the Social Credit movement experienced a lull, both in electoral success and incidents of anti-Semitism. This changed in 1962,however, when the national party experienced a massive geographical transfer of power to Quebec. A vibrant resurgence in Social Credit's electoral success occurred under Real Caouette, a car salesman from Pontiac, Quebec, who had long been involved in the Quebec wing of the national movement. In the 1962 federal election, Caouette linked his Ralliement des Creditistes with the national Social Credit party and, by invoking Social Credit's traditional bogeys of an anti-Christian conspiracy and the plot of the "moneyed interests," helped twenty-six Quebec Social Credit MPs (out of a national total of thirty) get elected." (1)

This presented a bit of a problem for the party, since only 4 of the 30 Social Credit MPs were from outside Quebec, yet their leader was Robert N. Thompson from Alberta. The year before that, while Caouette actually won the leadership race, Ernest Manning stepped in, saying that his province would never accept a francophone Catholic as party leader.

So while Thompson was officially the national leader and Caouette only deputy leader, Caouette wielded far greater power than Thompson and he knew it. He also got most of the press:

The surprise of Canada's inconclusive national election in June was the emergence of a fiery back-country French Canadian politician named Real Caouette, 44, whose right-wing Social Credit Party unexpectedly won 26 House of Commons seats from Quebec. Since then he has been filling the air with eccentric, if not demagogic, remarks. His fellow Social Credit-ers in English Canada explain that what the French-speaking auto dealer says often gets lost in translation. But last week, Caouette came through loud and clear in an interview in Le Magazine Maclean.

"Who are your political heroes in history?" he was asked. Caouette's brisk rejoinder: "Mussolini and Hitler." The storm broke, and it wasn't helped any by what Caouette had gone on to say in the magazine: "I admire Mussolini's qualities as a leader and I regret that he was a fascist. I admire in Hitler his economic reforms and I consider that he brought his people out of misery. I regret that he employed for war instead of for peace the ideas which he had."(2)

His comments drew praise from several sources including a letter from Dr. Hjalmar Schacht, who had been president of the Reichbank during the earlier part of Hitler's regime.

Schacht had written to Caouette: "I am very pleased to read in our press about your courageous statements and laudable opinion about the ideas of Adolf Hitler. I was happy to have served under his leadership in one of the key positions in our economy before the war and owing to that I had an opportunity to become acquainted with his greatness." In a conversation with a newspaper correspondent, Caouette remarked that Schacht was a Jew but despite his origin had not been liquidated by Hitler. When the correspondent expressed doubt about Schacht's Jewishness, Caouette responded that Hitler exterminated only "useless Jews." (1)

Caouette was a federalist who fought for bilingualism in the House of Commons, winning a symbolic victory when he got the Parliament's restaurant to produce bilingual menus. Interesting, since the Reformers always claimed it was Trudeau who first sought to make Canada bilingual, and indeed he did with great success. But it began with Social Credit.

This marriage was doomed to failure from the start and they would soon part ways. Running separately in 1965**, the Quebec party was more successful, and by the 1968 election, Caouette's party won 14 seats while Social Credit won none. They would reunite again briefly in 1972 but the party would never again win seats outside Quebec.
One longtime Social Credit member, disenchanted with the Quebec wing of the Party, left the province with his wife Gwendolyn and six children, and headed west. He was a supporter of Thompson and in fact, Thompson's children had stayed with him for awhile when attending school.
He would then try his hand at adding to the party's English speaking wing by running as a Socred candidate against none other than Tommy Douglas in the riding of Nanaimo—Cowichan—The Islands. I think we already know the outcome of that.
His name was Stockwell Day and his son, also named Stockwell; would later enter politics, with far more success. The senior Day had joined the Western Canada Concept, a western separatist party that wants all western provinces and territories to split and form their own nation.
Continued: Norman Jacques
Notes:
*James Keegstra joined the party in 1957
**Another federal Social Credit Candidate in 1965 was Preston Manning. According to Alf Hooke:

Manning campaigned actively on behalf of a full slate of Social Credit candidates, one such candidate being his son, Preston Manning, who ran for election in the Constituency of East Edmonton. The Conservative candidate secured 13,596 votes to Mr. Manning's: 6,762. Having spoken on young Mr. Preston Manning's behalf myself, I found the overwhelming vote against him hard to believe. I was one of those many who looked forward to hearing the voice of young Preston Manning on behalf of the Social Credit movement in the House of Commons. (3)

3. 30+5 I know, I was There, A first-hand account of the workings and history of the Social Credit Government in Alberta, Canada 1935-68, by Alfred J Hooke, Douglas Social Credit Secretariat