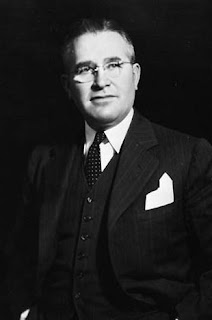 "Our Jewish friends should recognize that the cause of the growing anti-Semitism ... is not due to propaganda alone ... anti-Semitism is spreading, because people cannot fail to observe that a disproportionate number of Jews occupy positions of control in international finance, in revolutionary activities, and in some propaganda institutions, the common policy of which is the centralization of power and the perversion of religious and cultural ideals. This gives people the impression that therefore there must be a Jewish conspiracy to gain world control." Solon Low (1)

After the resounding success of Social Credit in the Alberta provincial election of 1935, a Western Social Credit Party was established to run in the federal election later that year. They won 17 seats, and John Horne Blackmore would act as their leader.

In 1939, the federal branch of the Socreds joined with former Conservative William Duncan Herridge and his supporters, to create the short lived New Democracy movement. The Social Credit Party ran in the 1940 election under the "New Democracy" name but in 1944 held their first national convention and Solon Earl Low, the Alberta treasurer, would be elected the federal party's first official leader.

Like most in the Social Credit Party at the time, Solon Low was antisemitic, believing that there was a Jewish conspiracy that had infected international finance.

Social Credit publications propagated typical Jew-baiting propaganda. Aberhart bought into the theories of Social Credit's English founder, Maj. C.H. Douglas, who blamed the outbreak of foot-and-mouth disease in the 1940s - and the British government's efforts to control it through mass slaughtering of all infected cattle - as a "Jewish-socialist plot" against English cattle owners.Using his own words, Aberhart melded his Christian fervor with Douglas's political conspiracies to create a stereotypical portrayal of the financial system."

The principles of the old-line politicians and their henchmen are like those of the man who betrayed the Christ," Aberhart said. "Gold was his god and millions have suffered because of it. The moneychangers upheld his right and crucified the Christ and they have been crucifying everyone since who follows in the steps of the Savior."

In a similar vein, Solon Low, the provincial treasurer, had some advice for Jews in combating anti-Semitism ... Ending anti-Semitism, he said, would require Jews to denounce those "arch-criminals" in their midsts who are responsible for these initiatives.This argument would continue for years, with the CJC calling on Social Credit to reject its anti-Semitism, and Social Crediters responding that they would be happy to do so as soon as the CJC rejects the perpetrators of world domination, and so it went.Later, in 1947, when Low was federal leader of the Social Credit party, he used a national CBC broadcast to lambaste "the international power maniacs who aim to destroy Christianity" and the "international gangsters who are day-to-day scheming for world revolution." He also couldn't resist the "close tie-up between international communism, international finance and international political Zionism." (2)

William Aberhart and Ernest Manning were not innocent either.

One of the leading officials in the CJC, Louis Rosenberg, had some comments about Manning’s repudiation. “Evidently the leader of the Social Credit Party in Alberta does not like to be called an anti-semite, although he has done nothing to repudiate the repeated anti-semitic remarks which appear regularly in his official paper Today and Tomorrow and the anti-semitic statements made by the Social Credit members in the House of Commons.” Moreover, stated Rosenberg, the only difference between blatant anti-Semites in the Social Credit movement and “more circumspect and careful men” like Manning and the late Aberhart was that the former invoked the word “Jewish” in their fulminations about the international financial conspiracy, whereas the latter “use the same arguments and the same phraseology but omit the word Jewish, leaving their true meaning to be understood.” (3)

The Canadian Jewish Congress decided to meet with the new national leader Solon Low, to voice their concerns.

Notwithstanding the CJC’s uneasiness with Manning’s ‘repudiation,’ it was not until December 1944 that Alberta CJC officials attempted again to confront Social Credit on the issue of anti-Semitism. That month CJC officials H.A. Friedman and John Dower met with Solon Low, leader of the newly-created national Social Credit party. Friedman and Dower met Low at the legislative buildings in Edmonton and talked with him for nearly two hours about Social Credit’s attitude on the “Jewish question.” They showed him several issues of the party organ (now renamed the Canadian Social Crediter) which were anti-Semitic. On the surface, the meeting went well. Low was conciliatory, assuring both Friedman and Dower that he strongly opposed anti-Semitism and that it definitely was not part of Social Credit policy. He gave them “his personal assurance that he would no longer tolerate the type of articles that we brought to his attention in the party’s paper ... that he would disavow any member of the party who indulged in Anti-Semitic statements
... that he would ... make a public statement to the press on the question of Anti-Semitism, which he assured us we would find fully satisfactory.”

“Some Jewish friends of our movement have told me that we are being identified with anti-Semitism because of our persistent and outspoken exposures of a group of international financiers and world plotters who are engaged in a criminal conspiracy to destroy democracy and Christianity and to enslave mankind to their rule.” By construing his meeting with Friedman and Dower in these terms, Low simultaneously refuted and reaffirmed Social Credit’s anti-Semitism. “Some of these men happen to be of Jewish racial origin,” he commented, “and to be more specific, of German-Jewish origin.” However, they were not exclusively Jewish, Low qualified, and although many were this was no reason to condemn Jews as a whole. Accordingly, it was important to clarify for everyone, including Canada’s Jews, Social Credit’s stance on anti-Semitism: We very definitely are not anti-Semitic or anti any race or religion ... The only times when the Canadian Social Credit movement can possibly be brought into conflict with any racial or religious group would be if those comprising such a group conspired together as a group in an organized attack on democracy and Christianity. I am sure that our fellow Canadians of Jewish origin recognize that a truly democratic and Christian society ... alone will give them the social objectives they seek as individuals in common with all Canadians ... it is fantastic for anybody to suggest that as Social Crediters we are anti-Semitic. I will go further and point out to our fellow Canadians of Jewish origin that actually the Social Credit movement is the most powerful influence in the country working for their emancipation.

Low’s speech had made a mockery of his meeting with Friedman and Dower and was the absolute antithesis of what they had hoped for. Not surprisingly, Western CJC officials were extremely dismayed by Low’s address and the entire CJC leadership became extremely wary about openly confronting Social Credit’s anti-Semitism in the future. What the CJC needed, but was not yet ready to create, was a public relations approach which did not rely on the goodwill of those who promoted anti-Semitism. (3)

And as Janine Stingel points out "... while anti-Semitic sparks were emerging throughout the country at the time, they differed from the Social Credit experience, which represented an institutionalization of Jew-hatred within a legitimately elected Canadian government." (2)

Stingel laments that Manning has gone down in the annals as the man who purged the anti-Semites from Social Credit, something she considers a generous assessment from what she knows of the machinations around the issue. She also sees a direct ideological (and blood) relationship between Social Credit and the Reform party/Canadian Alliance, which was formed by Ernest Manning's son,
Preston. (2)

3. FROM FATHER TO SON: CANADIAN JEWRY’S RESPONSE TO THE ALBERTA SOCIAL CREDIT PARTY AND THE REFORM PARTY OF CANADA, By Janine Stingel, 2001