Redefining Populism as a Political Alternative 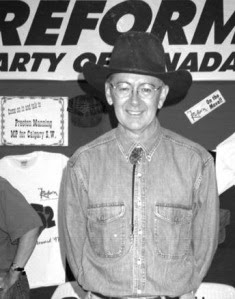 "My personal political convictions are rooted in the populist political traditions of western Canada." - Preston Manning

Populism can be described as a reactionary political expression, often rooted in a sense of persecution.

It can be "irrational, regressive, anti-intellectual and paranoid" (1) which in many ways describes the new American Tea party gang.

Populist movements are neither exclusively right nor left, as they can manifest themselves into fascism, Marxism, communism or democracy. Any movement driven by the masses.

But what is interesting about Reform movement populism, is that it was not bottom up, but top down. It was hatched and contrived by an "elite" group of four individuals: the multi-millionaire Francis Winspear. President of the Canada West Foundation, which was created to address Western grievances, Stan Roberts. Son of the former premier of Alberta, Preston Manning. And the controversial right-wing Canadian journalist, publisher and editor, Ted Byfield.

And the party did not emerge, as many believe, in protest over the National Energy Policy or Mulroney's decision to grant Montreal the maintenance contract for CF-18 fighter jets, instead of Manitoba, as he'd promised.

They were only necessary tools to further inflame western grievances.

The idea for this party originated in the 1960's when Ernest and Preston Manning wrote a little book called Political Realignment, which was a plan to reinvent Canadian conservatism, and move it sharply to the right. The concept for the National Citizens Coalition actually came from that book.

But the Mannings knew that they would have to wait until the next wave of white hot anger before they could act.

When Preston Manning began organizing the Reform movement, he studied the success of the Social Credit Party that enjoyed an enormous victory in 1935, and ruled Alberta for decades. But while William Aberhart could be said to be left wing, wanting to help those who were so poor "in the midst of plenty", Ernest Manning abandoned those notions, as he instead adopted neoconservative principles.

In 1943, premier William Aberhart died and was succeeded by a devout follower, Ernest Manning, who even more fervently preached a linkage between religious fundamentalism and right-wing free enterprise. The oil boom, which occurred shortly thereafter, further reinforced the political acceptability of Manning's ideology. Moreover, the boom also brought the considerable influence of the largely American-owned oil and gas industry to bear upon Alberta's political culture. Nowhere was this more the case than in Calgary.

The relatively few Americans who came to Alberta in the postwar era had a notable social and political impact. In the early years of the boom, a majority of the senior management of the major oil companies ... were from California, Oklahoma, Texas, and Louisiana. From 1955 to 1970, nine of the fifteen presidents of Calgary's exclusive Petroleum club were Americans.... Like their counterparts in the United States, they often held strong right-wing views." In short, the American-owned oil and gas industry held considerable influence in Calgary. (2)

And the American-owned oil and gas industry still have a considerable influence in this country, under the movement's new name: The Conservative Party of Canada, led by Preston Manning's former lieutenant, one Stephen Harper.