The Haiti Crisis Revisited: It Was All a "Commie" Plot 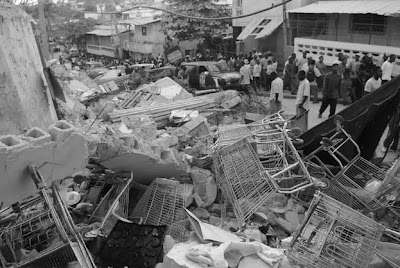 By now many, if not most, Canadians realize that Stephen Harper's quick response to the Haiti crisis was to change the channel, after taking a beating in the polls over his second self-serving prorogation.

And by now many, if not most, Canadians realize that Stephen Harper's visit to Haiti was for photo-ops.

If you had just one word to describe our prime minister, it would not be humanitarian, so the above assumptions are certainly justified.

However, there was something else going on here that seems to have been missed by Canada's mainstream media, even as several are revisiting our so-called aid, which appears to have been almost non-existent* (only 1.5% came from us)

This was a military operation. The ships Harper bragged about arrived empty and the military personnel, were there primarily to secure the airports and clear the way for the arrival of military jets. And they turned away Doctors Without Borders and planes loaded with medical supplies, so they could instead land troops**.

There were military trucks everywhere, with troops carrying machine guns... Stopping at the US Embassy we spoke with the marines... One said "...I thought I would be helping people but all I am doing is standing around in the heat with a gun...." And that's what they were doing. Everywhere. In trucks, hummers, on the streets, standing around in flak jackets with guns. Or sitting in the trucks with guns. While...Haitians were digging themselves out.... Everywhere we drove we saw Italian, French, Canadian, and US military...holding up the traffic, causing more congestion than was necessary, and not completely participating in relief efforts. ..." (1)

So why the need for so many troops? In part: Cuba.

Stephen Harper was the first world leader to visit Haiti after the earthquake. There was some belief that he rushed his travel plans, wanting to get ahead of French president Nicolas Sarkozy, who arrived days later.

But Harper's presence there, standing in front of our military hardware and with our troops, was to deliver a different message. He was on top of it.

Because before the Canadian or U.S. governments could respond, the Cubans were already taking charge.

... for the first 72 hours following the earthquake, Cuban doctors were in fact the main medical support for the country. Within the first 24 hours, they had completed 1,000 emergency surgeries, turned their living quarters into clinics, and were running the only medical centers in the country, including 5 comprehensive diagnostic centers (small hospitals) which they had previously built. In addition another 5 in various stages of construction were also used, and they turned their ophthalmology center into a field hospital-which treated 605 patients within the first 12 hours following the earthquake. (2)

The Cubans had actually been there since 1998, after Hurricane Georges ravished the island:

Cuba adopted a two-pronged public health approach to help Haiti. First, it agreed to maintain hundreds of doctors in the country for as long as necessary, working wherever they were posted by the Haitian government. This was particularly significant as Haiti's health care system was easily the worst in the Americas, with life expectancy of only 54 years in 1990 and one out of every 5 adult deaths due to AIDS, while 12.1% of children died from preventable intestinal infectious diseases.

In addition Cuba agreed to train Haitian doctors in Cuba, providing that they would later return and take the places of the Cuban doctors (a process of "brain gain" rather than "brain drain"). Significantly, the students were selected from non-traditional backgrounds, and were mainly poor. It was thought that, because of their socio-economic background, they fully understood their country's need for medical personnel, and would return to work where they were needed. The first cohort of students began studying in May, 1999 at the Latin American School of Medicine (ELAM). (2)

No one was overly concerned. But now amidst the worst natural disaster in modern history, exacerbated by extreme poverty, the West may have been a little worried about Cuban [communist] influence.

While North American media might have ignored Cuba's role, Haiti has not. A pointed remark was made by Haitian President Mr. René Préval, who noted,
"you did not wait for an earthquake to help us". Similarly, Haiti's Prime Minister Jean-Max Bellerive has also repeatedly noted that the first three countries to help were Cuba, the Dominican Republic and Venezuela. (2)

This story on it's own would not be newsworthy, except as a human interest story. But there are several other factors that make me question Stephen Harper's motives.

First comes from the Democracy Digest in December of 2009, revealing that Canada was going into the "democracy" business: The D-word out of favor? Don’t tell the Canadians. Seems that American warmongers are finding the coup business not as profitable as it once was, so the Harper government has expropriated 70 million dollars to take it over.

The second comes from Lawrence Martin's new book, Harperland. Martin reveals that Stephen Harper is not a fan of Peacekeeping, believing that Canada should become a "hard power". He also states that our prime minister sees the world not as a global community but as a "clash of civilizations". Something he's never shared with Canadians.

The third is Harper's anti-communist grounding, part of that "clash of civilizations". The Religious Right believe that the Antichrist will only appear after the world has ridden itself of communists. And his corporate base of course sees the profit in supplying military hardware, and also fear that communism will put an end to their greed.

But the most compelling reason, I believe, for the enormous military operation, was to protect something they would find more valuable than religion or war profiteering.

The Jan. 12 earthquake was on a fault line that passes near potential gas reserves, said Stephen Pierce, a geologist who worked in the region for 30 years for companies including the former Mobil Corp. The quake may have cracked rock formations along the fault, allowing gas or oil to temporarily seep toward the surface, he said yesterday in a telephone interview. (3)

He speculated that these enormous oil reserves could help Haiti get out of poverty. But will they be used for that?

According to Marguerite Laurent:

I wrote Part 1 of Oil in Haiti as the economic reasons for the US/UN occupation back in October, 2009. After the earthquake, I questioned whether oil drilling could have triggered the earthquake: Did mining and oil drilling trigger the Haiti earthquake? ... After being called crazy and un-American for writing that the 2010 earthquake gives the US the perfect disaster-capitalism opportunity to come out from behind the UN and openly occupy Haiti to secure Haiti's oil ... , strategic location and other riches for the corporatocracy... a veteran oil company man comes forward in Business Week to say, and one wonders how he can so authoritatively speculate about the area of the faultline without intimate knowledge of the drillings, explorations .. Haiti lies in an area that has undiscovered amounts of oil, it must have oil and the earthquake "may have left clues" to petroleum reservoirs! Oil that, uhmmm, "could aid economic recovery in the Western Hemisphere's poorest nation. (4)

Of course the veteran oil company man was Stephen Pierce and as Laurent reminds us, what he really meant to say was "that could aid Haiti's US-occupied economy recover its strategic oil reserves" for the global elite.

So while Haiti looked like just another photo-op for the big guy, it was more than that. He had planted the flag of Exxon, conquering the region for the global elite and kicking a little "commie" butt for the morally self-righteous.

And what will this mean for the people of Haiti who are still living in tents under horrendous conditions, ten months after the expenditure of millions of dollars, while sitting on all that oil?

I expect they will be colonized and subjugated, and if the Haitian government doesn't see it our way .. can you say "coup"? He'll just have to claim that Cuba was planning an invasion and we needed to protect them.

And the media will applaud.

*By this I mean only government aid. Canadians were more than generous in their contributions to relief organizations.

**During our stay of only seven weeks, our medical team did amazing work and the United States provided a much needed hospital ship.

4. Oil in Haiti: Reasons for the US Occupation Part II, by Marguerite Laurent, Global Research
Posted by Emily Dee at 1:56 AM