Is the Tea Party a Social Experiment or a Social Tragedy in the Making? 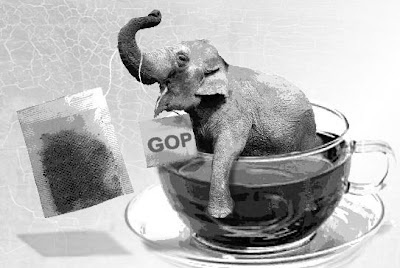 The late Lester Milbrath, an American political scientist; once categorized the citizens of democratic nations, as three distinct groups:

Apathetic - those who rarely, if ever, become engaged in politics. They may vote out of a sense of duty, but that's as far as it goes.

Spectators - those who do engage in political discussions, especially when they centre around single issues. Spectators almost always vote.

Gladiators - those who become actively involved in politics, campaigning or running for office.

Canadian political scientist, Brooke Jeffrey, takes this one step further, when she's discussing the neo-conservative movement; and includes a category for 'Ignorant Gladiators'. These are people who enter the political arena on a wave of anger and resentment, with few qualifications to actually lead.

They are the anti-government politicians, who only want to tear down, with few plans to rebuild. They offer no solutions to bring a nation, province or municipality forward. They only come prepared to dismantle and discredit.

Her book, Hard Right Turn was written a decade ago so the only 'Ignorant Gladiator' (1) governments she referenced were Ralph Klein's (Alberta) and Mike Harris's (Ontario). Neither man was terribly well educated, but they talked tough; feeding off the 'spectators' with hot button issues and private resentment.

But Jeffrey did speak a great deal about the Reform Party and their rise to power, and how they fed off ignorance. Their leader of course, was a very smart man. Smart enough to know where his base was. So messages were always simple but explosive.

No one suggests that there is only one career path or appropriate set of credentials for those who plan to run for public office. Life experience as much as education, could give individuals the ability to manage ... Unfortunately, few of the individuals attracted to the neo-conservative ideology have demonstrated these qualities. The greater the neo-conservative leadership's emphasis on moral and social conservatism, the more likely the supporters will be uncompromising in their views. (1)

In the United States the media has been aware for some time of the threat imposed by ignorant gladiators, especially those steeped in religious fundamentalism. But the Neocons knew they needed that passion to advance their cause.

So negative policy was wrapped in ambiguity, while they sang loud and clear the things they knew their followers wanted to hear. "Don't take our guns". "Hang 'em high". "Praise the Lord and pass the ammunition."

But while many in the American media were sounding the alarm, in Canada few spoke of it. The movement was given free rein, until it was almost too late.

Marci McDonald, who had spent a great deal of time in the U.S. as a journalist, knew the signs, so when she returned to Canada was shocked that the Neoconservative/Religious Right movement had gained so much ground.

So she wrote a book: The Armageddon Factor*, and the outrage was immediate, from both the right and the left. An exaggeration. She was a bigot. She hated Christians.

So the mainstream media mostly ignored her warnings, not wanting to upset their readers. There was a general consensus that we were merely following the United States, and since it took 30 years for their movement to bear fruit, we had a few decades to prepare ourselves.

But what they failed to realize was that this movement was running simultaneously, north and south of the border. We didn't need 30 years or even 30 days. It was here.

Last night I watched a BBC documentary that I had taped: Crashing the Tea Party. Commentator Andrew Neil interviewed many people involved in what has been described as the fastest growing political movement in the United States, and I was immediately struck with a feeling of Déjà vu .

This is Reform Party replay. And in the same way that the Reformers infiltrated and then took over Canada's conservative party, the Tea Party has now done the same with the Republicans. In fact one of their spokesmen, Matt Kibbe, when asked if they had infiltrated the Republican party, said that he preferred to think of it as "a hostile takeover".

I guess we're about to find out.

And sadly the few remaining moderates in the party are being pushed out.

But what I found alarming was that the signs many of the tea party-ers carry could have been written at Reform Party headquarters 20 years ago. "Silent Majority no more". "No new taxes". "Stop the spread of socialism".

When the Republicans decided to open this box, I don't think they realized what they were doing. They saw the "charged up" as their ticket to power. But now they have clearly lost control. The "Ignorant Gladiators" are taking over.

They are angry, they are righteous and they are armed. And they are eating the Republicans alive.

I've been reading Bob Altemeyer's online book: The Authoritarians, written before the Tea Party began. He was optimistic after the 2006 mid-terms believing that there may be some return to sanity. But he warned us not to get too comfortable.

The mid-term elections of 2006 give hope that the best values and traditions of the country will ultimately prevail. But it could prove a huge mistake to think that the enemies of freedom and equality have lost the war just because they were recently rebuffed at the polls. I’ll be very much surprised if their leaders don’t frame the setback as a test of the followers’ faith, causing them to redouble their efforts. (p. 3-4)

And redouble their efforts they did, reaching even further into the sess pool, and it could very well prove to be their undoing.