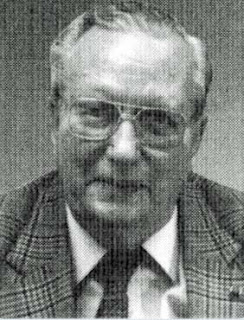 "In the course of the conflict between the Reagan administration and Ottawa, we Albertans are expected as loyal Canadians to cheer for the victory of Mr. Trudeau and his thug government. Some of us will find this very hard. We will wave the flag, of course. But deep in our hearts we will be hoping that the Americans whip the hell out of him." - Ted Byfield, founding Reform Party member (1)

Carl Olof Nickle (1914 - 1990) was an editor, publisher, oil baron, soldier and federal politician, representing a Calgary riding. He would retire from politics in 1957 and focus instead on the Alberta oil and gas industry.

As early as 1956 he had been discussing that industry and the Middle East. During one lecture he said:

I would like to comment on the outlook for expansion of markets for our Western Canadian crude oil a matter of particular importance to all Calgarians because of the effect it has had, and will have in the future on our growth as "Canada's Oil Capital". The recent and continuing crisis in the Middle East, where about two thirds of the world's presently proved oil reserves are located, has further emphasized the importance to Canada, this continent and to the Free World of the proved reserves plus the far vaster undiscovered reserves of the Western Hemisphere, including those of our Western Canada.

The longer term outlook is a confused one, in which the one fact most apparent is that the Middle East cannot be banked on as a secure supply of oil for Free World needs. The military might of Russia poses a constant threat. Even if there is no attempt by Russia to seize the Middle East by force which would almost certainly involve the Western World in a war for survival of its oilfed economy we face the prospect of interruptions to oil supply caused by the combination of Soviet propaganda and Arab nationalism. (2)

He speaks of the possible involvement of the Western World in a "war for survival of its oilfed economy". He also speaks of the threat of a "combination of Soviet propaganda and Arab nationalism."

This is not unlike the lecture given by American General Thomas Metz when he spoke to a group of senior Canadian military officers, soldiers, defence analysts and lobbyists in Toronto in 2006.

He ... shows a chart depicting the military challenges America faces, measured in terms of level of danger and level of likelihood. At the very apex—the most dangerous and the most likely—sits just one: radical Islamic terrorism. "Radical Islam wants to reestablish the Caliphate," says Metz. "Just as Hitler wrote Mein Kampf, you can read what they want to do." (3)

A Caliphate is a union of the Muslim world. It was the first political philosophy that adopted the notion of using their natural resources to look after their people. It wasn't communism, or socialism, it was just a belief in something bigger than they were. God or Allah, and they believed that this is what he wanted them to do. But nationalizing their natural resources (oil) runs contra to the West's goals of exploitation. Metz continues:

In his southern drawl, the general notes how much oil the U.S. consumes—roughly 25 per cent of the world's consumption, even though Americans make up only 5 per cent of the world's population—and how central this is to the country's high standard of living ... The connection between America's voracious oil consumption and the dangers of radical Islamic terrorism are never explicitly stated by Lt.-Gen. Metz; he simply notes that the Islamic world has a lot of oil and what happens there has an impact on energy markets. But an important element has clearly been added to the picture: the U.S. needs what lies under the ground in the Islamic world if Americans are to go on living the bounteous life that lies at the heart of the American dream—a life that has them devouring the lion's share of the world's energy. (3)

Not unlike 50 years ago when Carl Nickles raised the possibility of "the Western World in a war for survival of its oilfed economy."

So when Russia invaded Afghanistan, Reagan, the product of American corporatism, went into action, working with a group of "Terrorists" to secure the oil for American interests. And this is why Albertans, like Ted Byfield, hoped that Americans would whip the hell out of Pierre Trudeau, because he worked to secure our oil for the benefit of Canadians first. A home grown, non-religious caliphate.

I've written before about the National Energy Program that has taken on mystical proportions, through good PR. Even Westerners not born at the time, will raise it as an argument for their feelings of "alienation".

But the NEP did not destroy Alberta, nor was it an attempt to destroy Alberta. It was a battle between the Government of Canada and (mostly American) corporate interests. And it was not about oil so much as it was about taxes and regulations that hampered the Americans from getting richer at our expense.

When Joe Clark's government fell after only a few months in power, and Pierre Trudeau returned with a majority, the western provinces were concerned with the direction the government would now be going. Clark had attempted to reduce or reverse some of the programs and policies of the previous six years, including the elimination of Petro-Canada's role in national energy matters and, if possible, the privatization of the company. (4)

But he was gone, and Trudeau instead took an interventionist approach, deemed necessary to protect Canadians. As oil prices were rising, Alberta grew richer, and as this meant that equalization payments to the other provinces would increase, he would need extra revenue to ensure that the cheques didn't bounce.

Eventually Trudeau and Premier Peter Lougheed reached a suitable arrangement, and appeared on the front page of newspapers across the country, sipping champagne.

But this did nothing to appease the oil industry which was mostly American. You can see from the following chart that in 1980 only 26.1% of the Petroleum industry was Canadian owned and 18.7% Canadian controlled. And though Ontario had been forced for many years to pay higher than the market rate for their oil, to prop up the industry, the West now rose up in anger that they might have to start paying back. 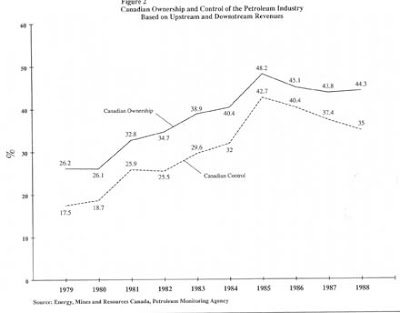 And the most vocal among them was Carl Nickle:

The most outspoken of these critics was Carl Nickle, a prominent oilfield executive and former Tory MP, who publicly condemned the entire budget outright as discriminatory and repressive. "I believe short term political gain for central Canada will foster more alienation, possible [sic] even lead to splitting the nation apart." (1)

But what they were the most upset about was the new tax structure in finance minister Alan McEachern's budget, that would eliminate many deductions, the corporate sector had enjoyed.

When Allan MacEachen was appointed finance minister in 1980 big business requested that government examine the tax system with a view to making changes. But MacEachen's senior advisers soon focused his attention on how billions of dollars were being lost yearly to scores of dubious corporate tax breaks.
Finance officials put together a tax reform package designed, among other things, to eliminate 165 of the most costly and counter-productive tax expenditure measures and in the process increase revenue by close to $3 billion. When he introduced the legislation it caused a firestorm of protest from the corporate elite.

Neil Brooks, now professor of tax law at Osgoode Hall Law School, was working for the finance department on the tax reform package and has recalled the tactics of the large corporations. "It's almost a classic example of what's called a capital strike. I mean, business simply said to the government that if you go ahead with these measures we will stop investing in Canada." The development industry reacted instantly. "Literally the next day they were closing jobs down and . . . pulling cranes off construction jobs." (5)

This was because of taxes, not the NEP, but if the corporate world was going to create an AstroTurf, "grassroots" movement they couldn't very well say that they were upset that they would have to start paying their fair share. So instead they sold it as being an attack by Ottawa on the West, and with the help of Ted Byfield, an early Reform Party mentor, they shifted public sentiment from one of Canadian nationalism to Western regionalism, and it almost broke up the country, as several separatist movements exploded on the scene.

"In the months and years that followed, Byfield's Alberta Report continued to mythologize the intent and the impact of the NEP" (1) and it would culminate in the creation of a new party, with the help of Stephen Harper: the Reform Party of Canada, now calling itself the Conservative Party of Canada, headed up by the same Stephen Harper. It was Byfield who gave the party their original battle cry: "The West wants in".

And that same Stephen Harper is helping "the Western World in a war for survival of its oilfed economy" (not fighting radical Islam) by committing our soldiers to three more years of war. And he is continuing his program of tax reduction for our wealthiest citizens, meaning that the rest of us will have to absorb the costs of those three more years of war.

Forget 'Western alienation'. This is the alienation of Canadian citizens and we want in dammit.