The Patriot Game: The Charter of Rights 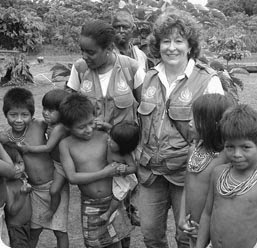 "And we have a Supreme Court, like yours, which, since we put a charter of rights in our constitution in 1982, is becoming increasingly arbitrary and
important ... The establishment came down with a constitutional package which they put to a national referendum. The package included distinct society status for Quebec and some other changes, including some that would just horrify you, putting universal Medicare in our constitution, and feminist rights, and a whole bunch of other things." Stephen Harper (1)

In April of 2007, Canada's Charter of Rights and Freedoms celebrated it's 25th anniversary. Stephen Harper refused an invitation to be the keynote speaker at an event marking the occasion.

The Harper government is passing on a major Ottawa conference marking the 25th anniversary of the Charter of Rights, with the Prime Minister and three Cabinet ministers turning down invitations to speak. In fact, the milestone anniversary will be a muted affair within the government ranks ... Mr. Jedwab said Prime Minister Stephen Harper, Justice Minister Rob Nicholson, Heritage Minister Bev Oda and former justice minister Vic Toews were also invited to address the April 16-17 event, but they declined. (2)

The fact is that the Charter of Rights and Freedoms has always been a thorn in the side of the Reform movement. Preston Manning preferred that it would have been more like the American model.

On the Charter of Rights, Manning takes the position that Canada should have, like the U.S., a concept of rights which makes no mention of race, gender, or language. His support for triple-E Senate is modelled after the U.S. Senate and is proposed for Canada in spite of the fact that a similar model "often makes government impossible" in Australia, according to Desmond Morton.

Last, Preston Manning wishes to emulate the U.S. by including a provision for property rights in the Canadian Charter of Rights. This concept is rooted in American individualism and free-enterprise culture. However, it may be less appealing in Canada, which has had a more co-operative and collective approach to life and to government. (3)

Stephen Harper's views were similar to Manning's but based a lot on the book The Patriot Game by Peter Brimelow, who saw both the patriation of the Constitution, and the Charter as not only an attack on Anglo Canadians, but the endowment of too much power on the judiciary.

Certain aspects of public policy were entrenched, however, notably bilingualism, and a "Charter of Rights and Freedoms" was added .. the new constitution clearly does pose a legal threat to much of its nationalist legislation restricting the use of English. More subtly, the constitution represents a break with the British tradition of common law, custom and precedent, and greatly enhances the power of the judicial branch. (4)

What Brimelow opposed the most, and what was reflected in the views of the Reform party members, was that in his mind the English had conquered the French in Canada, so they should accept the Anglo hierarchy. What he failed to understand was that Quebec and French Canadians, were to be equal partners in Confederation as one of our country's founding peoples.

So the Constitution and the Charter of Rights and Freedoms set out to right a wrong.

The difficulty Francophones faced in the civil service ... the one addressed by the resulting bilingualism policy, was not discrimination against Francophones as such, but the fact that at the higher levels they had to work in English. Francophones who were prepared to speak English could always in effect resign from their race in working hours, unlike the American blacks. (5)

"Resign from their race in working hours"?

And this was the logic that Stephen Harper found so compelling that he went out and bought ten copies of Brimelow's book to give to friends. And when Harper addressed the Reform Party Assembly in Saskatoon in 1991, and stated emphatically that there would be no special privileges for Quebec, his mind was made up.

And we have to remember that his political views are not organic, but set in stone. He only gave Quebec special status, because he said that he needed to "suck up to them."

Another bone of contention for the movement was the entrenching of rights, including those for women, ethnic groups and Aboriginals, but especially for homosexuals.

One of the Reform Party founders, Ted Byfield, stated that the only thing that should be legislated in Canada was morality, but this charter actually, in his view, attacked morality, by protecting "sin". And protecting that sin was the judiciary.

This would start a war. One that is ongoing.

On June 12, 2000, Harper railed against biased judicial activism. "Serious flaws exist in the Charter of Rights and Freedoms, and there is no meaningful review or accountability mechanisms for Supreme Court justices" (6)

And on September 2, 2009, at a closed-door speech to Conservative supporters in Sault Ste. Marie, Ont., he spoke against judicial independence and made it clear that if he ever obtains a majority, he will stack the bench with judges who are not "left-wing ideologues." (6) "I ask you for a moment to imagine how different things would be if the Liberals were still in power. . . . Imagine how many left-wing ideologues they would be putting in the courts. . . ."

Maurice Vellacott had accused Supreme Court Chief Justice Beverley McLachlin of calling herself God, and though it was a lie and he made a meager attempt at an apology in the House of Commons, the sentiment remains.

One of the worst attacks however, has been on Louise Arbour (shown above right). Arbour is the UN High Commissioner for Human Rights, a former justice of the Supreme Court of Canada and the Court of Appeal for Ontario and a former Chief Prosecutor of the International Criminal Tribunals for the former Yugoslavia and Rwanda. She has since July 2009 served as President and CEO of the International Crisis Group.

Someone all Canadians should be proud of. And yet Harper’s ministers refused to recognize her work, while Vic Toews launched a personal attack, as part of his party's policy.

The Conservative grenade hurlers couldn't help themselves. Next up to the plate was Treasury Board Secretary Vic Toews, whose target was Louise Arbour, the United Nations High Commissioner for Human Rights and a former Supreme Court justice. Arbour had a far more distinguished reputation than Toews did, but that didn't stop him from labelling her a national "disgrace" when she praised a new Arab human rights charter and chastised both sides in the conflict between Israel and Lebanon. Toews hollered "Shame on her!" when the matter was raised in the Commons. (7)

Yes shame on her. How dare she stand up for human rights abuses, earning enough of an international reputation that she would be given such high positions.

We need to start recognizing and supporting our public intellectuals, who have been taking a beating since Stephen Harper came to power. Canadians have always taken pride in the accomplishments of it's citizens and this government would prefer that we forget them, so they can be free to pursue their agenda of Americanization.

Canadians should be proud of their Charter of Rights and Freedoms and proud of the fact that we have for decades been seen as a Just Society. Harper's law and order agenda is a wrong fit for us. It's not who we are, just who he would like us to be.

One of my favourite quotes about the Reform movement came from the Vancouver Sun, and I share it often:

"Reform is somewhat un-Canadian. It's about tidy numbers, self-righteous sanctimoniousness and western grievances. It cannot talk about the sea or about our reluctant fondness for Quebec, about our sorrow at the way our aboriginal people live, about the geographically diverse, bilingual, multicultural mess of a great country we are." (8)

6. The Hill: Harper challenged as silence of the jurists ends, By: Richard Cleroux, Law Times