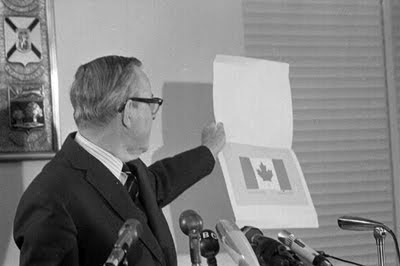 Continuing with the story of Peter Brimelow and his book The Patriot Game, that influenced Stephen Harper and Reform Party policy, Brimelow complains about our national anthem and flag.

And again he uses these things to suggest special favours for Quebec, not understanding that French-Canadians had an equal partnership with English-Canadians and First Nations in the foundation of this country. At least they were supposed to have.

So these changes were not about pandering to Quebec, but an attempt to right a wrong.

But that's not how Brimelow and the party hierarchy sold it to their members. With the help of Jock V. Andrew and his book: Bilingual Today, French Tomorrow, the Reformers were convinced that Quebec was taking over, and the Liberals were helping them do it.

And many believed that it would lead to war.

A political conspiracy has been taking place in Canada which, if it continues, will shortly lead to a Canadian civil war. This war will almost certainly involve the United States. Other countries, Russia and China included, will take whatever advantages they can from it. Many lives will be lost, and much of eastern Canada will be laid waste. When it is finally over, nothing will have been resolved that could not be resolved today, with no loss of life whatsoever. What is it all about?

In 1968, Canada's newly-elected Prime Minister, Mr. Pierre Trudeau, set out with a half-dozen like-minded associates under cover of some very clever double-talk to convert Canada from an English-speaking country into a French-speaking country.

How could such a scheme even be contemplated? How could the second-largest country in the world, almost four million square miles of land and resources, be whipped out like a rug from under the 75% of the population that is English-speaking and be handed in its entirety to the Quebec-centred 25% of the population that is the French-Canadian race? (1)

By the time of our Centenary and Expo 67, we had our flag, and it captured an optimistic mood. It was good time to be Canadian. The Languages Act and official multiculturalism came soon after.

Not everyone was impressed, including Peter Brimelow, who later helped to add that to the list of grievances that fuelled a party built on anger.

And like Andrew, Brimelow believed that there was a conspiracy afoot. Why were the words different in French than English? Why was there no mention of the Queen?

The first point to notice is that this national anthem contains no reference to the Queen. Yet Canada is still nominally a monarchy and the Queen is still head of state. The second point about the national anthem that will occur to observers is: why not just translate from the French? A literal rendition of the first French verse reveals the answer:

Although most English Canadians don't realize it, what French Canadians have been singing all these years is an explicit hymn to Francophone ethnic particularism, which is blandly identified with "Canada." It specifically emphasizes the integral importance of the Roman Catholic faith to the Francophone nation, although there are some Francophone Jews and even a historic mini-community of Francophone Protestants in Canada, let alone (of course) the Anglophones. It extols the efficacy of action - including, in the past, violence - to defend "our rights," which in Canadian history has become a code-word for Francophone collective interests within the state. (2)

And then Brimelow moves to the suggestion that we should have adopted the Maple Leaf Forever.

This song was certainly beyond earthly help after its direct reference to the undeniable but unmentionable Conquest of 1759. (2)

Ah yes. There it is. The conquest of 1759. The Anglos had conquered the French, so they had no rights to this land. But what Brimelow and the Reformers fail to understand is that the battle between Wolf and Montcalm, that lasted a mere twenty minutes, meant very little. It's only revisionist history that gives it credence.

Canada's legitimacy was not determined by a single battle, but through centuries of compromise.

1. Bilingual Today, French Tomorrow: Trudeau's Master Plan and How it Can be Stopped, By J. V. Andrew, BMG Publishing, 1977, Pg. 1