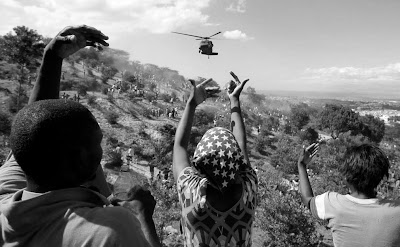 When Stephen Harper announced as part of his swift action on the Haiti crisis, that "Ships of the Atlantic fleet were immediately ordered to Haiti from Halifax, loaded with relief supplies", the media applauded.

Canadians felt good that once again we were helping out in a time of need, and pundits felt sure that this would improve Harper's polling results, which had dropped ten points as a result of his last self-serving prorogation.

Lawrence Martin gave his account of our heroic PM, which will go down in history as exemplary. Or at least to those future historians who view Harperland as a chronicle. But even if media accounts will help to support the claim, the reality is that our government's response to this crisis was horrific. Most of the action was for the cameras, with canned stories and scripted accounts. Only the politics of the situation became important.

So what was our military doing there?

According to Roger Annis, critiquing the recent speaking engagements of our military brass, vaunting its role in Haiti in the month following the earthquake:

Commander [Josée ] Kurtz's ship [HMCS Halifax] arrived eight days after the earthquake and was stationed off Jacmel for five weeks; the sister ship, HMCS Athabasca, was stationed off the coast of Léogane for the same duration. The Halifax carried a full complement of 250 sailors as well as close to 200 Canadian soldiers. The commander stated that the fundamental mission of both ships was to provide "security and stability" in and around their assigned areas, Jacmel and Léogane. She gave an overview of the ships' work during their five weeks of service, saying the goal was to "save lives, mitigate suffering and assist the onshore activity of Canadian and other police, military and aid agencies."

"We didn't provide care in the beginning," she said. "Our first task was to secure order." (1)

A direct contradiction to reports that we were providing medical care and delivering much needed supplies.

HMCS Halifax provided no medical aid to the civilian population, the commander stated. It assisted the modest medical service of the Canadian military's Disaster Assistance Relief Team (DART) that was already onshore when the Halifax arrived ... the Canadian military provided no surgical assistance to Haiti following the earthquake. Its medical presence amounted to a first-aid station that would refer cases requiring serious medical attention to other services in the immediate region or in Port-au-Prince. (1)

And according to Emily and John Kirk:

Canada's contribution included the deployment of 2,046 Canadian Forces personnel, including 200 DART personnel. The DART (Disaster Assistance Response Team) received the most media attention, as it conducted 21,000 consultations-though it should be noted they do not treat any serious trauma patients or provide surgical care. Indeed, among the DART personnel, only 45 are medical staff, with others being involved in water purification, security, and reconstruction. In total, the Canadians stayed for only 7 weeks.

They provided some necessary services, but they only stayed seven weeks. Far too short a time to accomplish much, except important photo-ops.

So what was really going on?

This was an invasion to protect corporate interests and promote Canada as a "hard power".

The Conservative government has been anxious to assert a leading role in the relief and reconstruction of Haiti, so as to advance the interests of Canada’s corporate elite in the Caribbean—long a major site of Canadian overseas investment—and assert Canada’s claim to be a major power.

In an action closely coordinated with Washington, Canada deployed 2,000 Canadian Armed Forces (CAF) personnel and two navy battleships to Haiti in the days immediately following, the earthquake—one of the largest overseas CAF deployments since World War II. And on January 25, the Canadian government
hosted an international conference in Montreal on rebuilding Haiti. The conference focused on schemes to make Haiti a haven for cheap-labor offshore assembly and garment-manufacturing operations.

Despite the size of the CAF deployment and the enormity of the humanitarian crisis, Canadian aid reached Haiti only slowly. It took more than ten days for the CAF to initiate relief efforts in Jacmel and medical assistance only began to be provided in Léogâne on January 29.

While the press has obligingly promoted the Harper government’s claim that Canada has mobilized massive resources in support of the relief effort, Ottawa has in fact given Haiti less than $100 million in emergency aid ... All told, the Canadian government will provide about 1.5 percent of the estimated $14 billion that will be required to rebuild the shattered country. (3)

We were not there to help the Haitians, only to help ourselves and the new corporate government in Harperland.