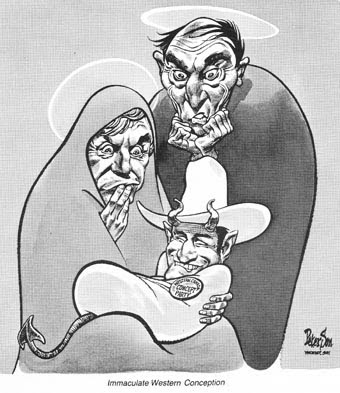 In 1965, a student at Winnipeg College climbed to the roof of the school to hoist a nine-foot Red Ensign when the Canadian flag was first being raised. His name was Doug Christie and he would become a life long separatist, advocating for the Western provinces and territories to split with Canada and strike out on their own.

His movement would gain some support in 1980 when Quebec was holding a referendum and the government of Pierre Trudeau had announced the National Energy Policy. However, it wasn't the NEP that created the uproar but changes to the tax laws in Alan MacEachern's budget.

MacEachen's senior advisers soon focused his attention on how billions of dollars were being lost yearly to scores of dubious corporate tax breaks. Finance officials put together a tax reform package designed, among other things, to eliminate 165 of the most costly and counter-productive tax expenditure measures and in the process increase revenue by close to $3 billion.

When he introduced the legislation it caused a firestorm of protest from the corporate elite. Neil Brooks, now professor of tax law at Osgoode Hall Law School, was working for the finance department on the tax reform package and has recalled the tactics of the large corporations. "It's almost a classic example of what's called a capital strike. I mean, business simply said to the government that if you go ahead with these measures we will stop investing in Canada." The development industry reacted instantly. "Literally the next day they were closing jobs down and . . . pulling cranes off construction jobs."

Life insurance companies had their own strategy. The industry, which for years had paid income tax rates of close to zero, wrote to every one of its policyholders, telling them the new measures to tax investment revenue would greatly increase their premiums. "The government," says Brooks, "at one point was receiving thousands of letters a day from people across the country."(1)

But in the west, they couldn't sell it as the wealthy fighting against tax increases, so instead made it about Ottawa pandering to Quebec and Ontario, at the expense of the western provinces, especially Alberta. The National Energy Policy then became the enemy, despite the fact that many wealthy westerners liked the new policy, because it promoted 50% Canadian ownership and allowed further development of government lands.

Soon after the announcement of the NEP, [Alberta Premier Peter] Lougheed fired three effective salvos: a constitutional challenge to the natural gas tax; a staged reduction in shipments of oil to other provinces; and a freeze on the oil sands, whose development the NEP encouraged. Although the Petroleum Club and the radio talk-shows in Alberta cheered the premier, and bumper stickers declared "Let the Eastern Bastards Freeze," [energy minister Marc] Lalonde had included provisions in the NEP that attracted key Albertan players.

These entrepreneurs and their lawyers rightly saw the provision that there must be 5o percent Canadian ownership on the Canada Lands —those potentially rich areas under government control—as highly beneficial. Dome Petroleum, Nova, and Petro-Canada therefore complained about the new taxes on gas and oil but did not join Lougheed's general denunciation of the NEP. The influential Bob Blair of Nova, a major figure in the oil patch, openly declared his Liberal allegiance and remained in close touch with both Trudeau and Lalonde. "Smiling Jack" Gallagher of Dome most enthusiastically embarked on the acquisition of foreign oil companies, which were eager to abandon Canada in the wake of the NEP. (2)

Unfortunately, after the 1980 election that ended Joe Clark's brief governance, those fuelling the separatist campaign, went into action.

Highlighted against the rise and fall of the abbreviated Tory reign, the 1980 election aroused immediate anger and concern in the West. In Alberta, a sixty-year-old Edmonton millionaire and car dealer, Elmer Knutson, sent an angry letter to the Edmonton Journal the day after the election."' The letter, which has acquired an almost mythic stature in western separatist folklore, adumbrated a series of themes which were to be the staples of western separatists and other right-wing elements in subsequent years."' It especially complained of a French-dominated Ottawa, as exemplified in such policies as bilingualism, and the fear that Trudeau's majority Liberal government would now proceed with constitutional reforms which would reinforce French domination of the rest of Canada. Knutson's solution to this perceived threat was simple: Quebec must be made to leave Canada.

Knutson was not a stranger to political matters. In the late 1970s he had been co-chair of the One Canada Association, an organization 'committed to increasing police powers, ending bilingualism, and tightening immigration policies. Then, in December 1979, Knutson lost the Edmonton South Tory nomination to incumbent Douglas Roche, whom Knutson once described as 'a socialist masquerading as a conservative But the response to his Journal letter — 'One lousy little letter,' in Knutson's words — astonished even him. In one month, Knutson received 3800 replies, most of them positive.' As a result of this public response, Knutson formed the Western Canada Federation (West-Fed) in March 1980. At almost the same time, the results of the federal election breathed new life into the faltering political career of a thirty-four-year-old Victoria lawyer, Doug Christie. (3)

Peter Brimelow, author of The Patriot Game, the book that was a Bible for Stephen Harper's early political leanings, saw things a little differently. This was an attack on English Canada:

In the fall of 1980, after the federal Liberals' return to power and their imposition of the National Energy Program, reports began to filter back to Central Canada that the natives on the western frontier beyond the Ontario boundary were unusually restless. Several organizations had sprung up advocating that the West - the Prairie provinces, British Columbia and the federally administered Yukon and Northwest Territories - separate from Canada. The two most important were the Western Canada Concept Party, begun in British Columbia and headed by Doug Christie, a Victoria lawyer; and the Western Canada Federation Party, based in Alberta and led by Elmer Knutson, an Edmonton farm equipment millionaire.

Both these parties argued that, to adapt Joe Clark's Shawinigan comment during the Quebec referendum campaign, the Canada to which they had wished to belong no longer existed. The conditions of Confederation had been changed, and they wanted out. Less active but worth a footnote was the Unionist Party, which directly advocated joining the U.S.: it was founded by Dick Collver*, until 1979 leader of the Saskatchewan Progressive Conservatives, who shortly afterwards acted on his beliefs and moved to Arizona.

Suddenly, Christie and Knutson were attracting crowds of thousands to their meetings. Prominent Western figures were expressing sympathy, notably Carl
Nickle, a well-known oilman and former Tory federal MP, who had even been considered a candidate for Lieutenant Governor of Alberta the previous year but who told a luncheon gathering of 700 Calgary businessmen in October that after the NEP he had "sorrowfully" become a separatist. At the same time, the Edmonton Journal ran a poll showing that a startling 2 3% of Albertans supported an "independent West." There were angry exchanges in the House of Commons in Ottawa when Tory leader Joe Clark drew attention to the phenomenon. He was immediately accused of thereby "aiding and abetting" it. Pierre Trudeau offered the helpful opinion that Western separatism was "nil and non-existent," being at, root "a fight about money" in no way comparable with Quebec's grievances. This naturally inspired redoubled efforts to prove him wrong. (4)

He was right of course. The uproar was over the closing up of the tax loopholes, but instead was channeled against the NEP. And Quebec's grievances were completely different. Many of the French-Canadians had been living like plantation slaves in their province.

The NEP wasn't perfect but it wasn't the disaster it was made out to be. But that didn't stop the Reform Party from reviving it for political gain.

Doug Christie's Western Canada Concept Party had one seat in the House of Commons, but only for a few months. He was joined by another disgruntled Anglophone, who had left Quebec during the Quiet Revolution. He would run as a WCC candidate against Tommy Douglas, but of course lost. His name was Stockwell Day Sr. and his son is now in the Harper government.

Dick Collver moved to Arizona, coming back to testify during the trial of Colin Thatcher. According to Collver, Thatcher had visited him on his Arizona Ranch, asking him where he could hire a hitman.