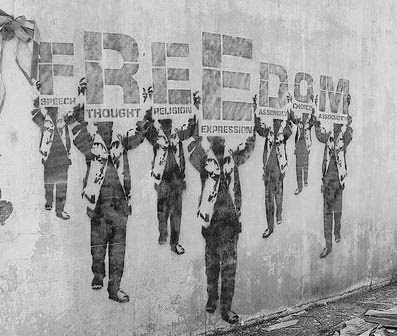 I have a confession to make. I visibly cringe every time someone in the media uses the term 'freedom' when justifying war.

Because history has proven time and again that there is nothing that destroys freedom more than the act of war.

The Loss of Freedom as a Political Reality:

What is astounding to me is how easily people are willing to relinquish their freedoms for the sake of war. When the Bush administration first decided to invade Iraq and established the Patriot Act, the majority of Americans when polled agreed that it was “both necessary and appropriate”.

And when that same administration authorized the National Security Agency to engage in electronic spying, without warrants, on Americans suspected of supporting "terrorism", there was little public outcry. They were told that their nation's sons and daughters were killing and dying for their freedoms. The same freedoms they were in the process of willingly surrendering.

Besides only criminals and terrorists would object to having their phones tapped, so if you've got nothing to hide, why object, right? Yet the very safeguards that were put in place to protect citizens from their government, were now being used to to give the government more control over it's citizens.

And I'd be willing to bet that the majority of the people involved in the Tea Party movement with their signs demanding 'liberty', are the same ones who supported their government's removal of their most basic liberties in the name of war.

This could be attributed to propaganda and brainwashing. That's certainly true to a certain extent. However, Hannah Arendt, an authority on totalitarianism, disputes much of that claim.

She was the first after WWII, a time when the Nazis were called "monsters" by most in the press, to remark on how normal they were. "Unimaginative, ordinary and unthinking". And that was what she found frightening. When covering the trial of Adolf Eichmann at Nuremberg:

Others may have hoped to see Bluebeard in the dock, she wrote, but for her, the horror lay in the fact that "there were so many like him, and that the many were neither perverted nor sadistic ... [but] terribly and terrifyingly normal." She was one of the first to refute the "monster theory" of less-than-human Nazis. (1)

And while many suggested that the German people were not aware of what was happening, or were simply brainwashed into complacency, Arendt writes:

No doubt, the fact that totalitarian government, its open criminality notwithstanding, rests on mass support is very disquieting. It is therefore hardly surprising that scholars as well as statesmen often refuse to recognize it, the former by believing in the magic of propaganda and brainwashing, the latter by simply denying it ... A recent publication of secret reports on German public opinion during the war (from 1939 to 1944), issued by the Security Service of the SS (Meldungen aus dem Reich. Auswahl aus den Geheimen Lege-berichten des Sicherheitsdienstes der SS 1939-1944, edited by Heinz Boberach, Neuwied & Berlin, 1965), is very revealing in this respect. It shows, first, that the population was remarkably well informed about all so-called secrets—massacres of Jews in Poland, preparation of the attack on Russia, etc.—and, second, the "extent to which the victims of propaganda had remained able to form independent opinions". However, the point of the matter is that this did not in the least weaken the general support of the Hitler regime. It is quite obvious that mass support for totalitarianism comes neither from ignorance nor from brainwashing. (2)

We watched with horror the scenes from Abu Ghraib, and listened for weeks, to the accounts of the torture of Afghan detainees. But what has changed? Did we rise up? Did we demand an end to the war that resulted in such inhumanity? Do we even know if the torture has stopped?

Are we brainwashed? I don't think so. We go about our daily lives, having relinquished all authority for this war to the government.

Who Needs Totalitarianism When the Populace Restricts our Freedoms?

The other phenomenon that is disturbing to me, and perhaps the best argument for the propaganda theory, is the attitude of the populace. Our government doesn't have to restrict our freedoms, because they are being restricted by those around us.

"If you don't stand up for our troops you should stand in front of them". "Taliban dupe". "Lefties". All apparently valid arguments in challenging anyone opposing the war.

In 2006, there was a rally on Parliament Hill, sponsored of course by lobbyists for military contracts. There was a lone NDPer carrying a sign "Support our troops. Bring them home". He was knocked to the ground and his sign broken in two.

His freedom of opinion was removed by his fellow citizens.

And we see the same attitude in the House of Commons. When Michael Ignatieff asked what was being done about the detainee issue, Stephen Harper said he wished that he had as much concern for our troops as the Taliban. When Jack Layton stated that he was appalled by Rick Hillier's statement that our military were not public servants but their job was to kill people, he was dubbed "Taliban Jack".

The media ate it up.

Fear of a Jewish Conspiracy helped to fuel Nazism. Fear of Communism allowed Americans to give up basic rights under McCarthyism. Fear of terrorism, turns citizens against each other, and allows them to accept inhumane acts.

And that fear is eating up the space necessary for compromise. You're with us or against us. All those who "support terrorism" on that side of the room.

This doesn't mean that I don't support our soldiers. They are doing a job. You can support the troops and not support the war.

And it doesn't mean that I don't respect our veterans. I very much do.

But as Ceasefire asks: Is Remembrance Day too much about war, and not enough about peace?

... this militarized focus on Remembrance Day is not shared by all. One of the most prominent examples of this is the white poppy campaign, which dates back to 1933. This poppy is meant to symbolize the need for peace and to commemorate the war-related deaths of both civilians and service men and women.

And Sharon Fraser sees Remembrance Day as a tool of propaganda:

Those of us who speak against wars are shushed, especially on November 11, or we're told that it is these wars (even the one in Afghanistan!) that have guaranteed our freedom to speak openly. As many others are, I am moved by the faces of the elderly veterans on November 11 and that's a little sentimental. I really dislike the false equivalency that tosses all the wars in the same basket and I am not at all impressed by antics such as the recent one at an Ontario Legion, which puts a bit of tarnish on the veterans' organization.

Let's just say that, to me, the observance of Remembrance Day has been appropriated and turned into a tool of propaganda and I have come to resent its tone and what it has come to represent.

How can we pay homage to those who died to protect our freedom, and then dishonour them by allowing those freedoms to be taken away?