Democracy in Crisis: Governing Under a Cloud 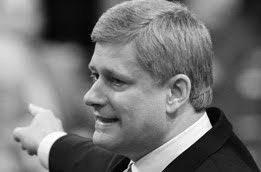 Susan Delacourt has a column in the Star today: Is Canadian democracy in real danger?

I believe it is.

She discusses the reflections of political scientist David Docherty, who believes that the House of Commons should be the centrepiece of Canada's democracy. But instead it is being abused as a place to take cheap shots without reprisal, while seemingly lacking validity, over issues of importance; like the climate change bill and the decision to throw Canadians into War for three more years, without input or debate.

There is an excellent book: Parliamentary Democracy in Crisis, that discusses the importance of Harper's first prorogation, when it became painfully clear that he had no intention of governing based on the will of the people. Parliament was an inconvenience, which of course meant that we were an inconvenience.

There were several constitutional and Parliamentary experts who contributed to the book, including Professor of Law and Political Science at the University of Toronto, Lorraine E. Weinrib. She discusses Stephen Harper's "time out" and it's important significance.

This man had lost the confidence of the House, which meant that he could no longer legitimately be our prime minister. And when Governor General Michaëlle Jean allowed him to prorogue Parliament in December of 2008, to avoid the inevitable confirmation of this, there should have at least been some restrictions on his power, seeing as how he was actually on probation.

Some commentators considered the situation so exceptional as to call for conditions restricting Prime Minister Stephen Harper's powers to routine
matters for the duration of the prorogation of Parliament. No conditions were imposed. The prime minister went on to appoint one Supreme Court justice and eighteen senators during the period of prorogation – hardly routine matters – when the question of his support in the House was under a cloud. (1)

So how did he get away with it? It boggles the mind. And yet he did. And since that time he has continued to get away with increasing attacks on the democratic process and the principles of responsible government.

The events that led to the prorogation of Parliament demonstrate the fragility of one of the basic principles of British parliamentary government, the principle of responsible government. This principle stipulates that a particular government continues in office only as long as it enjoys the confidence of the elected members of the House of Commons. For this reason, minority governments are by definition less stable than majority governments. They are particularly unstable when a prime minister's preference is to denigrate the opposition parties and their leaders, rather than to build upon common ground. Delaying a vote of confidence is a serious matter because it creates the possibility of the democratically illegitimate exercise of public power. (1)

He had gotten himself into this mess. It was not a coup, but a reaction to his negative policies, after promising to play nice.

Why did Harper throw down this partisan gauntlet? Presumably, he wanted to take the first opportunity to establish his dominant author­ity over the new minority Parliament. (1)

He was counting on the perceived weakness of Stéphane Dion, and the fact that the Liberals couldn't afford another election.

The media are always singing the praises of the Conservatives because they have more money than anyone else. Why should that matter in a democracy? That's exactly what we want to avoid, is political success dependant on cash. Yes, the Corporate Welfare Bums take care of him very nicely, and he in turn takes care of them. But who is going to take care of us?

Canada is supposed to be a democratic country. But we now have a man in power, who is doing his utmost to change that.

Each individual element poses cause for concern. The accumulation suggests that Harper is capable of precipitating a serious constitutional crisis to avert responsibility for his own mistakes and miscalculations and to stay in power. (1)

I believe that Weinrib is right.

Bob Altemeyer, Associate Professor in the Department of Psychology at the University of Manitoba, has studied authoritarianism, and the phenomenon of a willing populace. When he wrote his thesis The Authoritarians, George Bush was still in power, and Altemeyer suggests:

There has never been a more obvious, appropriate, and pressing time for this discussion. The threat that authoritarians pose to .. democracy has probably never been clearer. It is just a coincidence, but human affairs have provided the foremost example of how badly right-wing authoritarianism can damage ... George W. Bush has been the most authoritarian president in my lifetime, as well as the worst. And that’s not a coincidence.

Stephen Harper is clearly the most authoritarian prime minister we have ever had, as well as the worst. And that’s not a coincidence either. But why should he be accountable when we don't demand accountability?

Our democracy is being undermined from below, simply because we are allowing tyranny from above.

2. The Authoritarians, By Bob Altemeyer, Associate Professor, Department of Psychology, University of Manitoba, 2006
Posted by Emily Dee at 8:13 AM