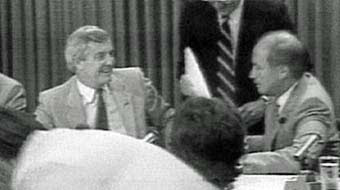 "We have Rightwing protectionist Conservatives, championing free enterprise -with no interest in social reform. We have Leftwing socialism trying to build reform. There is a large intelligent mass at the centre that is demanding a more enlightened approach - Fiscal responsibility + social reform. Free to own, free to achieve, free to grow and to change but who want their government to take responsibility for stimulating growth ... Only thru liberalism can we have both a free society and a quality of life." Stan Roberts Founding Reform Party Member

The Canada West Foundation was founded in 1971 and was funded by individual memberships, corporate donations, as well as provincial and territorial grants. It's aim was to conduct research into the economic and social characteristics of the West and the North, and to make proposals regarding it's development.

It was not partisan and it's founding members included Duff Roblin, former Tory premier of Manitoba, and Liberal MP James Richardson. Other prominent people who filled their ranks, were the media king Izzy Asper, political columnist Gordon Gibson, former governor general of Canada, Edward Schreyer; and Jim Gray, vice-president of Canadian Hunter Exploration. The chairman was president of Burns Meats, Arthur Child. Child was a millionaire and, according to writer Peter Newman, a member of Calgary's 'nouveaux riches'.

But the most prominent member of the CEF was its president, Stan Roberts. a former Liberal MLA. In 1970 he wrote a note to himself, possibly intending it to be part of a speech, but this was how he felt about the federal political climate.

Roberts could probably best be described as a Social-Democrat. He was a fair and intelligent man, who would later help to create the Reform Party. In fact, he challenged Preston Manning for leadership of the Party, fearing that Manning was bringing in too many from the Right-Wing fringe, and he had the backing of the man who provided the seed money, Francis Winspear. He was right of course, but through crafty maneuvering, Manning won the day.

I think it would have been a much different party had Roberts headed it up, but he died soon after, so I guess we'll never know.

Roberts was part of the Task Force on National Unity headed by former Liberal cabinet minister Jean-Luc Pepin and former Ontario premier John Robarts, to address the Quebec Question after the election of René Lévesque .

By 1978, he had become convinced that western Canada had to become more involved in the constitutional process. In his own words: 'What has happened in Quebec may have precipitated the crisis, but it's not an Ontario-Quebec debate. It's a Canadian debate and we in the west have a part in it.' (1)

In 1976, the CWF commissioned a report by M & M Systems Research Ltd. of Edmonton examining how a new balance of national and regional interests and aspirations could be achieved within Canada, 'while maintaining the unity and integrity of Canadian Confederation.""

And of course, M & M was owned and managed by Ernest and Preston Manning. It would later be renamed Manning Consultants Limited, in 1969, a year after the elder Manning's resignation as Alberta premier. The Mannings had never been too far from the political arena and had forged strong ties with big business.

Through their work with NPARF and the National Citizens' Coalition, they envisioned a New Canada, one run by the corporate sector. In 1970 they had drafted a paper that became a blue-print for neoconservatism in Canada.

In 1970, M & M produced its first paper, entitled Requests for Proposals and Social Contracts. Based on the system of contracting used by such American agencies as the National Aeronautics and Space Administration (NASA), and written in the now familiar language of systems theory, the paper advocated the provision of social programs by private industry and commerce." ... neo-conservative solutions to the increasing fiscal problems of the liberal welfare state. (1)

It all looked good on paper.

The Mannings' paper was used as the basis for discussions held at public meetings throughout western Canada, the Yukon, and the Northwest Territories during September and October 1977. Then, in December 1977, the foundation commissioned three reputable political scientists - David Elton and Peter McCormick, of the University of Lethbridge, and Fred Engelmann, of the University of Alberta - to study federal systems of government existing elsewhere in the world.

Their study, entitled Alternatives: Towards the Development of an Effective Federal System for Canada, came out in February 1978, and made several specific proposals, notably that the Senate be replaced by a House of Provinces consisting of delegates from the provincial governments. The intent of this proposal was to bring the regions into the federal decision-making process, while not fundamentally weakening or decentralizing federal authority. The study also made clear where the authors stood on the Parti Quebecois's proposal of sovereignty-association: 'There is no question but that French Canadians have legitimate grievances ... [However, the] fuzziness of political independence and economic association would generate feelings of exploitation of both sides of the new divide ... Quebec would [succeed] in creating in political reality that which until now has seldom existed outside her nightmares – a politically unified English Canada facing an isolated Quebec.

This study subsequently became a discussion paper at the CWF's Alternatives Conference held in Banff, Alberta, on 27-9 March 1978. Among the many funders of that conference was the Winspear Foundation, named after Francis Winspear, the disenchanted former Liberal. The conference attracted 300 delegates from across the country, including 50 from Quebec, and several high-profile speakers, including Flora MacDonald, the federal Tory critic for federal-provincial relations, Alberta premier Peter Lougheed, and Saskatchewan premier Allan Blakeney. In the end, Elton, Engelmann, and McCormick's proposals were generally endorsed by the delegates. Stan Roberts noted: 'with a clear consensus the delegates supported the concept of a strong central government . (1)

And it received a lot of praise from all quarters. But it never got off the ground. It came at a time of much political turmoil. Joe Clark won the election in 1979, only to lose another several months later. Quebec was holding a referendum and the battle lines appeared to have been drawn.

The CWF took on a more combative role, with their director Arthur Child, and the west was about to rise up again.

And within a decade Preston Manning found the time was right to start a new party, founded on Western grievances. But any organization or political party founded on anger is eventually going to be consumed by it. And when the Reform Party made their way to Ottawa, they came ready for a fight.

And under their new name, the Conservative Party of Canada, and new leader Stephen Harper, they are just as combative, and unwilling to compromise.

Now, with the publication of Harperland: The Politics of Control, Globe and Mail columnist Lawrence Martin has entered this fray and one-upped past observers by claiming that Stephen Harper’s Conservative government has taken “the politics of control” to an entirely new level—and in this case, the intent is most emphatically personal. For Martin, this tendency is no mere response to a more fractured and frenzied media, but a studied, long-term strategy designed “to break the [Liberal] brand.” The result has become “a Soviet-style monitoring maze” and “a vetting operation unlike any ever seen in the capital” that demands all aspects of government pay unwavering obedience to the Prime Minister’s Office.

Capitalism with the face of a monster.