When the Foxes Take Over the Hen House 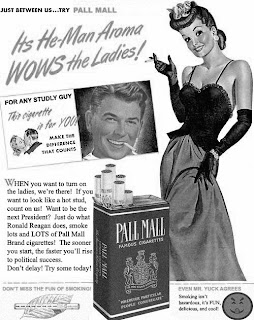 Ronald Reagan was a "B" movie actor. By the early 1950's his career was in the toilet and he was reduced to print ads in magazines, and parts in forgettable pictures.

But he had a look and a voice that was homey enough to convince people of anything. And that brought him to the attention of a man named Lemuel Boulware, General Electric's vice president of employee, public, and community relations, who hired Reagan to be his company's spokesperson.

Corporate America was tired of having to give in to worker's demands and wanted to shift public sympathies away from the labour force, to what journalist Murray Dobbin calls "the good corporate citizens".

But first GE had to be seen as the company reaching out to workers.

Over the past few years, few contract negotiations in U.S. industry have been as bitter and bumpy as those between General Electric Co. and the C.I.O.'s International Union of Electrical Workers. With out fail, the I.U.E.'s trigger-tempered Boss James B. Carey peppered the company with shouts of "chiseling," called its offers a "sham" and "an obvious trap." Once, in a crescendo of rage, he bellowed that G.E. was an "aid and ally" of the Communists. Usually G.E.'s negotiator, Vice President Lemuel P. Boulware, gave every bit as good as he got.

General Electric were the good guys. And until his retirement in 1957, Boulware never stopped reminding his workers of how good the company was, and they had Ronald Reagan selling the same notion to the public. This strategy became known as "Boulwarism".

As personnel and press boss at General Electric, Vice President Lemuel R. Boulware, 62, was one of the most controversial labor-relations managers in the history of a new art. A tough, trap-jawed Kentuckian, Boulware was a hard bargainer during contract negotiations and never failed to point out what a company like G.E. did for its employees. Many businessmen considered "Boulwarism" a smart strategy for combating Big Labor, imitated it widely, even though unions bitterly hated it. (2)

The unions began losing the battle for public opinion. And by 1960, when GE had to renegotiate with it's workers it was a whole new ball game. They could afford to be tough because any bad press could be directed at the union bosses.

The milling picket lines, the fire hoses, the club-wielding police were all reminiscent of the bloody strikes of the 1930s. When the International Union of Electrical Workers struck General Electric last week, the company vowed it would keep its plants open for all employees who wanted to work. Both sides knew the vow could lead to violence. It was not long in coming.

The last time G.E. faced a strike of comparable proportions—in 1946—it closed down its plants, but since then it has hardened its policies. Under Vice President Lemuel R. Boulware, who now serves only as a consultant, G.E. developed a broad policy known through the industry as "Boulwarism," in which the company makes an unceasing effort to sell itself to the workers. In bargaining, the company first listens to the unions' demands, then puts all that it is willing to grant in its first contract offer; after that it will make only minor concessions, thus making gains from a strike problematical. (3)

But it wouldn't be enough to simply bust the unions where possible, so they also targeted government, launching a lecture circuit for Ronald Reagan, "as a crusader against big government." (4) The man who had been a liberal all of his life, was now the "spokesman" for neoconservative policies.

So who better to put forward as president when corporate America decided that life would be better if they simply ran the country? Ronald Reagan. The ultimate company spokesman.

And he did not disappoint. In 1981, Congress enacted the largest tax cuts in U.S. history.

GE was one of the biggest winners in the tax cut bill, getting a S283-million tax rebate for the period 1981-83 despite making profits of $6.5 billion. The tax windfall allowed GE to go on a buying spree of other companies, including RCA and NBC. This was a pattern for all the corporate giants as capital investment increased dramatically, with almost all of it going to other countries. In effect, the billions in tax dollars sacrificed by the American people were used to further deindustrialize their own heartland and boost the growth of super-corporations.

And taxpayers would also fund the propaganda that would allow the wholesale dismantling of the industrial infrastructure, because corporations used their enormous tax cuts to buy up media outlets, further shifting public opinion to their cause.

And besides enormous tax cuts to the wealthy, Reagan also allowed CEOs to run the treasury, beginning with Donald Regan, director of Merrill Lynch, who became secretary of the treasury and White House chief of staff under President Ronald Reagan.

In the following video clip, we see Regan bark at the president, telling him to speed it up. Which begged the question. Who was really running the country?

And Merrill Lynch has done very well indeed. When they were "bailed out" by the American people, 75% of the taxpayers' money given to the firm, was used to pay bonuses to their CEOs.

GE nurtures its good corporate citizen image with an $18.8-million fund for its foundations (less than half of 1 percent of its net earnings). But even here much of the money is directly self-serving, going to business think-tanks, business associations, and coalitions fighting government regulation. So the Institute for International Economics lobbies for the corporate line on trade, and the Americans for Generational Equity campaigns for cuts to entitlement programs like social security. GE was a key funder of the Committee on the Present Danger, which propagandized for the massive military buildup of the 1980s, and of the Center for Economic Progress and Employment, which, despite its name, is a front group of industry giants determined to gut product-liability laws.

While corporate Canada always had a voice in political matters, it was Brian Mulroney who first moved lobbyists right into government. And now Stephen Harper has also cut out the middle man.

His first defence minister, Gordon O'Connor, went right from lobbying for military contracts with Hill and Knowlton to helping to decide which of his former clients got to cash in.

Bernard Prigent, the VP of Pfizer, was appointed to the governing council of the Canadian Institutes of Health Research, the federal agency that distributes about a billion dollars annually for health research.

Guy Giorno, Harper's former chief of staff, was one of the most influential lobbyists for the oil and gas industry, and his new chief of staff, Nigel Wright, was with the firm given the sole source contract for our new fighter jets.

And if you don't think that corporate Canada is in charge of the country, why are they getting further tax cuts, while Canadian citizens are being told they will have to tighten their belts?

"Fascism should more properly be called corporatism because it is the merger of state and corporate power." - Benito Mussolini

A Deceptive Democracy: A Confidence Game