The Art of Ambiguity and Preston Manning's Bait and Switch 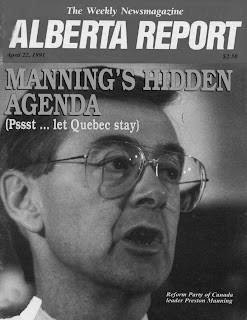 Many politically engaged Canadians are now fully aware that the Conservative Party that Stephen Harper currently heads, did not descend from Canada's traditional Tory Party, but from the Reform movement, and even further back than that, Social Credit.

As early as 1967, the Mannings, Ernest and Preston, envisioned a new national party, and they laid out the platform for such a party in a book called Political Realignment.

Ernest Manning had been approached by a group of wealthy businessmen who told him that money would be no object, if he would be open to starting a party representing corporate interests, but he instead suggested that they simply work through the existing Progressive Conservative party, and swing it to the right.

But the PCs at the time wanted nothing to do with them, so they opted instead to wait for the next wave of anger.

It would take almost two decades.

And the anger would come over several moves by the Trudeau government. An attempt to close tax loopholes and make Canada's rich pay their share, the National Energy Program and official bilingualism.

This was sold to Westerners as an attempt to make them support the rest of the country by syphoning off their oil profits, and a pandering to Quebec. They never mentioned the "fair taxes" initiative, or they might not have received the same support.

Not that Western grievances weren't real, but they were definitely inflated and exploited.

The Reform Movement (including the new Republicans and Tea Party) has so many layers, that if you try presenting them to someone, their eyes glaze over. It is so overwhelming. "Neoconservatism", "Leo Strauss", "Religious Right".

But if you take it down to a few important points, it all makes sense, beginning with the fact that it is a movement based solely on lies. And to sell the lies, those on both sides of the border, have succeeded because they have been able to finely hone the art of ambiguity.

Utilizing intellect and emotion, they craft their messages so that they mean different things to different people. The basis of Leo Strauss's thought.

The wonderful Murray Dobbin had already figured this out after attending early Reform assemblies. When Preston Manning or Stephen Harper were speaking, it was clear that their messages were not clear at all.

Dobbin referred to it as "calculated ambiguity".

Manning took all the grievances he could find, put them in a big box and tied them up with a green bow. Then he began making "promises" based on what was in the box. They were empty but they were passionate.

He would end special favours for Quebec, bilingualism, multiculturalism, turban wearing in the RCMP, the Charter of Rights, abortion, gay rights, the gun registry, the "patronage" position of the Governor General. It was a long list.

But he was able to join together all of the right-wing fringe groups, who finally saw hope, no matter how outrageous their demands. It didn't matter. He never intended to meet their demands only dangle them like a carrot to keep them running.

... the fringe parties were a genuine, albeit extreme, reflection of a right-wing resurgence in the West during the early 1980s. To the extent that extremism is succinct and clear, these parties provide a useful analytical prelude to the later emergence of the Reform party. (1)

Manning had them all transfixed. But he had to move slowly.

The biggest issue was Quebec and as such, while the ultimate goal was a national party, he postured, and vowed to stand tough when prime minister. If Quebec didn't like it they could leave.

And while expanding Eastward into Ontario, this still had all the markings of a Western protest party. At least until the hierarchy pulled a fast one.

Though the party remained constitutionally and politically a western party after the 1989 Assembly, the policy book based on that assembly was completely purged of any mention of "the West." Manning's foreword in the 1988 edition talks of the likelihood of a divided Parliament after the next election in which "Western Reformers would be in a powerful position to pursue our agenda." The booklet is peppered with phrases like, "A fair shake for the West," "Reform MPs will look out for Western interests," and numerous derogatory remarks about "Central Canada" and "Central Canadian interests," "Central Canadian terms" as well as "Quebec-centred" biases of Mulroney.

Virtually all of this western, anti-central Canada terminology was purged from the 1989 edition of the booklet. In Manning's two-and-a-half page foreword, entitled "The New Canada," there is not a single reference to the West or westerners. Gone, as well, was the "Declaration of Adoption" in the 1988 book, which recognized "the supremacy of God."

The sanitizing of the policy book was done by the Party Policy Committee (PPC), without any mandate from the assembly. It was a body which would play a major role as Manning guided the party away from its western orientation towards national party readiness. Appointed by the party's Executive Committee, and chaired by Preston Manning, its key members were Stan Waters and Stephen Harper. Harper was the Chief Policy Officer of the Party and the only other person, besides [Deb] Grey and Waters, whom Manning trusted to speak for the party.

With a policy book completely cleansed of any reference to the West and most of its specifically western policies, plus the assembly's authority to take the Reform message to the East, the stage was set for the next phase in Preston Manning's plan to create a new conservative party. (2)

The old bait and switch.

Stephen Harper will still play the Western grievances/Quebec card when necessary, as he did with the "separatist" cries during the 2008 coalition crisis. Or more recently with the Edmonton Expo bid and the Quebec arena.

David Staples in the Edmonton journal, under a photo of Harper in Quebec, discusses Jean Charest's promise of funds for the new NHL arena: Premier Jean Charest announced he was willing to put $175 million from his budget (a.k.a. transfer payments from Alberta) towards a Quebec City arena.

"a.k.a. transfer payments from Alberta"?

In the end, they won't blame Harper, but will instead blame Quebec.

This is why Stephen Harper will not give in to too many demands from his "base", because if he does he loses the passion of discontent, that has gotten him to where he is now. What he instead implies is that he will only grant their wishes, if they can grant him his. A majority.