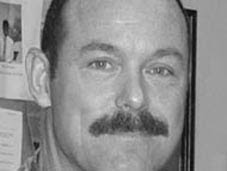 Major Paeta Hess-Von Kruedener was serving as a United Nations Military Observer stationed at the UN Patrol Base in Khiam South Lebanon. On the evening of July 25th 2006, at approximately 7:30 p.m., he and three other UN Military Observers were killed when their patrol base was struck by an Israeli bomb.

An official inquiry determined that it was a "tragic accident".

He was presented with a posthumous award and all was forgotten.

And yet Kruedener's widow tells a different story.

The wife of a Canadian soldier missing and presumed dead in an Israeli air strike on a United Nations observation post in southern Lebanon says she believes the attack was intentional. Cynthia Hess-von Kruedener, wife of a missing Canadian UN observer believed killed this week in Lebanon, speaks yesterday at Canadian Forces Base Kingston. Accompanied by her son, Jonah Rosson, Hess-von Kruedener said she believes the Israeli attack on a UN post, which killed at least three, was intentional. Cynthia Hess-von Kruedener made the allegation yesterday when she spoke to reporters at Canadian Forces Base Kingston.

"Why were they firing on that base?" Hess-von Kruedener demanded to know. "That wasn't the only day they were firing on that base. My information from (her husband) is weeks upon weeks they've been firing on them. "In my opinion, those were precision-guided missiles, then that was intentional," she said. (1)

According to the official report: At the time of the incident Israel and Hezbollah were involved in an armed conflict, which began on 12 July 2006 with the kidnapping of two Israeli soldiers and quickly expanded into a large-scale incursion into southern Lebanon by the Israeli Defence Forces.

We'll never know because they don't have to answer for anything they do.

Stephen Harper's response to his death was "what was he doing there in the first place?" Simply a case of his being in the wrong place at the wrong time. Two Israeli soldiers had been kidnapped so this could be excused. "Though Lebanese civilian casualties outnumbered those for Israel by almost ten to one, Harper announced that the Israeli response to provocations by Hezbollah was "measured."" (2) Measured? According to Linda McQuaig:

Harper's strong pro-Israel bias took on a dramatic new dimension in the summer of 2006 when Israel launched its devastating attack on Lebanon, after the capture of two Israeli soldiers by Hezbollah ... Suddenly, some fifty thousand Canadians were in harm's way, trapped in a country that Israel was relentlessly bombing. Now, one would have thought that the first priority of a Canadian prime minister is the safety of Canadians. One would have thought that Harper, faced with a choice of expressing his support for Israel or doing everything he possibly could to protect tens of thousands of vulnerable Canadians, would opt for protecting the Canadians. After all, he is prime minister of Canada, not Israel.

But, astonishingly, Harper refused to do the very minimum necessary—to add his voice to those of other world leaders and the UN secretary-general in calling for a ceasefire in the conflict.

... Stephen Harper followed Bush's lead—as he has in so many areas—in refusing to call for a ceasefire. The message was clear: let the killing continue! In fact, Harper actively defended Israel's bombing, calling it a "measured" response, a description he refused to withdraw even after eight members of a Canadian family and a Canadian UN peacekeeper were killed by Israeli strikes in Lebanon. Harper's stance amounted to giving encouragement to a foreign army whose actions were directly endangering the lives of Canadians. (3)

He recently stated that he has taken bruises for his undying support of Israel, but what I would like to know is when will he take a punch or two for us? "After all, he is prime minister of Canada, not Israel." And yet he is dragging Canada through the mud, and Canadians along with him.

And when Michael Ignatieff joined International voices demanding that Israel answer to possible war crimes for their actions, Harper immediately went on the attack.

In Question Period, he declared, "This is consistent with the anti-Israel position that has been taken [by] virtually all the candidates of the Liberal leadership." Noting that his wife was Jewish, Bob Rae demanded an apology, alleging that the PM's remarks were a divisive insult. "We cannot carry on politics in this country like this," Rae said. "It will not work. It divides Canadians. It's something for which he should be thoroughly embarrassed." Ignatieff similarly accused Harper of "playing crass politics with the issue of the Middle East. It's beneath him and his office to do so." (2)

But if anything he's gotten worse.

When Israeli seized a Turkish ship in international waters and killed nine peace activists, ours was the only government not to denounce their actions.

Prime Minister Stephen Harper cheerfully followed through with a planned meeting the next day with Israeli Prime Minister Benjamin Netanyahu. Appearing with Netanyahu, Harper merely expressed regret about the loss of life and the fact that it interfered with Netanyahu's visit to Canada: "I'm sorry this has coloured this [visit]," said Harper, "but delighted you were able to join me at least last night and today, and we've had some important talks, so welcome to Canada." (4)

Interfered with his visit to Canada. Yes that's what I was worried about too.

The sad thing is, that this is all political. Stephen Harper could care less.

His position on Israel, more uncompromising than Ottawa had ever been accustomed, became the source of a long-running dispute with traditionalists ...
He was asserting the neo-conservative view, which framed issues in black-and-white as opposed to seeing them in the context of root causes, historical grievances, and the like.

[but] As well as conforming to Harper's beliefs, the policy had other benefits. Though Muslims outnumbered Jews by two to one in Canada, the Jewish community was more politically impactful. Harper was aware, for example, that he stood to gain a major advantage in the Canadian media with his position. The country's largest media empire, Canwest, was controlled by the Aspers, who made no secret of their allegiance to Jewish causes and became enthusiastic backers of Harper on all related questions. (2)

That certainly lends credence to Harper's new found love of Israel, being only for political leverage. But where does that leave us?

Most Canadians are not anti-Israel, but we prefer a more even handed approach when it comes to the Middle East. Nobody wins in a nuclear war.

But our prime minister is actually choosing a foreign country over his own, and like a petulant child, used to getting his own way, Benjamin Netanyahu is challenging U.S. president Obama, because he knows he can. The mid-terms have given him more friends in Washington and Canada is willing to put "hard power" (2) behind whatever decision he makes.

And Canadian citizens have absolutely no say in the matter. None.

When Ari Fleischer was touting Stephen Harper around, arranging interviews on Fox News, Canadian journalist Scott Feschuk quipped: "I guess if there’s an upside, it’s that members of our own press gallery now understand what it takes to get a question answered by our Prime Minister – an American passport and Ari Fleischer’s cell number."

What will we need to get our prime minister to allow a debate on this subject? Netanyahu's cell number? It would appear he's now our co-leader.
Sources: