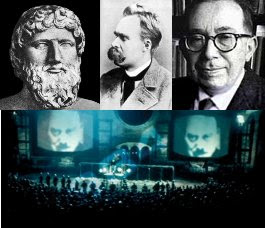 One of the books I'm currently reading is Parliamentary Democracy in Crisis, a collection of reflections on the 2008 coalition attempt and Stephen Harper's reaction to it.

One of the book's contributors, Professor of Law and Political Science at the University of Toronto, Lorraine E. Weinrib, discusses the lies used to justify the resulting prorogation, and how they became believable, simply because the government refused to address anything that might contradict their version of events.

In this way they were able to persuade the Canadian public of the truth of the lie. In religion mythology becomes fact when enough people believe in it, and the same can be said for history and politics.

Weinrib focuses on John Baird, but includes much of the false information that was never corrected, not the least of which was the fact that this was not a Coup d'Etat as the Conservatives claimed, but a legitimate action in a functioning Parliamentary democracy.

The near collapse of a minority government is not a significant event. The circumstances that surround this near collapse, however, signal that there may be further serious repercussions arising from the events of December 2008 to January 2009 ... these events reflect a pattern of disregard by Harper of a number of deeply embedded constitutional principles and practices. Each individual element poses cause for concern. The accumulation suggests that Harper is capable of precipitating a serious constitutional crisis to avert responsibility for his own mistakes and miscalculations and to stay in power. (1)

And after getting away with this, he has continued to challenge our constitution. Another self-serving prorogation, refusal to hand over documents relating to the torture of Afghan detainees, killing a climate change bill that already had the approval of Parliament and his latest attempt to extend the war in Afghanistan, without debate.

Weinrib wonders how far they were willing to take this. Would they replace the Governor General with one more compliant, if their request was denied? We have since learned from Lawrence Martin's book, Harperland, that they were actually going to go to the Queen if they didn't get their wish.

Ultimately their success was sticking to their lies, and repeating them often enough until they became fact. The fact that they weren't fact, but fiction, was not important.

And one of these was the notion that the coalition was with separatists who would have veto powers. But as Weinrib reminds us:

Harper had engaged in a similar coalition-building plan to oust the Liberal minority government of Paul Martin, a plan that included a signed agreement with the leaders of the NDP and the Bloc Quebecois. The taint of support from a separatist party didn't seem to bother Harper when that support worked in his favour.

Every time this was brought up, the Conservatives changed the subject. They didn't have to call it a lie, simply because they couldn't. There was irrefutable proof. But by screaming "separatist" loud enough, they were able to keep the "truth" from the conversation.

I remember being particularly upset, when Gilles Duceppe brought in a letter showing that 2004 was not the first time those from the government side of the House had approached him about forming a coalition. In 2000, when Stockwell Day was leader of the Alliance, he presented a letter of intent, should Jean Chretien win with a minority. (he was returned with a majority)

Day not only denied that he had done such a thing, but stated that it was not in his DNA to join forces with separatists. He must have chuckled to himself, given that his father, a contributor to that DNA, belonged to the Western separatist party of Doug Christie, the Western Canada Concept. And in fact the Sr. Day ran as a WCC candidate against Tommy Douglas in 1972 (2).

But little of that came out in the media. Headlines were filled with "coup", "socialists" and "separatists". A few tried to correct the disinformation, but they were mostly ignored.

Harper played on the ignorance of the Canadian public as to the constitutional framework within which our parliamentary system of government operates. Polling at the time confirmed the public's lack of familiarity with the working of a minority government, in particular the governor general's role in the changing of governments. It is a matter of concern that a prime minister would feel comfortable exploiting, indeed encouraging, views that were inconsistent with some of the most basic features of our system of government. (1)

The hyperbole also had an impact on those already on the fringe. I watched a video on YouTube by a citizen who called this an attempt by Marxists to take over Canada. And Dennis Pilon, a political scientist at the University of Victoria, stated that : "the actions of this prime minister are coming dangerously close to inciting mob rule." (3)

There has been much discussion over whether or not Michaëlle Jean did the right thing, or whether the coalition would have provided a stable government. But that is not the issue here.

What is at issue is that our prime minister deliberately perpetrated a fraud to save his job. Repeating Weinrib: "... these events reflect a pattern of disregard by Harper of a number of deeply embedded constitutional principles and practices. Each individual element poses cause for concern. The accumulation suggests that Harper is capable of precipitating a serious constitutional crisis to avert responsibility for his own mistakes and miscalculations and to stay in power." (1)

Allan Gregg in his review of Martin's Harperland, shares this concern.

Even though it has become a cliché to refer to Stephen Harper as a control freak, the power of Martin’s argument hits you like a jackhammer. Those of us who follow these things quite closely remember a number of occasions when the Conservatives have found themselves in hot water because of allegations of abuse of power, but we tend to forget just how frequently this has occurred ... In total, Martin cites some 70-odd cases of these types of abuse and the combined effect is almost dizzying. (4)

It's the accumulation and frequency of the assaults on our democracy that are at issue, along with the ease with which this government can lie to us.

"The elite must, in a word, lie to the masses; the elite must manipulate them—arguably for their own good. The elite employ "noble lies," lies purporting to affirm God, justice, the good. ... These lies are necessary in order to keep the ignorant masses in line." - Leo Strauss