The Tea Party and Being Careful What You Wish For 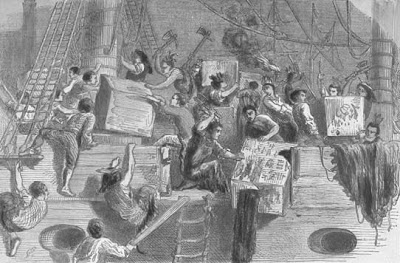 "There are only two tragedies in life: one is not getting what one wants, and the other is getting it." - Oscar Wilde

The new Tea Party in the United States is trying to revive the Boston Tea Party and the revolutionaries who fought against taxes imposed by Britain.

T.E.A. stands for 'Taxed Enough Already", but in fact, the Tea Party want taxes reduced even more, while still paying down the deficit. They also want the government to butt out of their lives.

A tragedy in the making?

What was the Boston Tea Party Really About? According to American historian Ray Raphael:

We all know and celebrate the climax to the Boston Tea Party. On December 16, 1773, several dozen men dressed as Mohawk Indians boarded three ships belonging to the East India Company, cut open 340 chests of tea and dumped the contents in Boston's harbor. We fondly remember the carnival-like drama as a catalyst for the American Revolution, and over the years both liberal and conservative protesters have laid claim to its irreverent legacy. (1)

And yet Revolutionary-era Americans did not celebrate the event.

... many patriots viewed the destruction of tea as an act of vandalism that put the Revolution in a bad light. Patriots also downplayed the tea action because of its devastating impact. That single act precipitated harsh retaliation from the British, which in turn led to a long and ugly war. (1)

The Boston Tea Party Was Not About Lower Taxes

Though the modern day version believe that the original Tea Party was about lower taxes, it was not. It was about collecting their own taxes. Whoever levied taxes got to call the shots, including how to spend the money.

The Tea Tax was nominal and in fact "Land taxes and poll taxes assessed by their own colonial assemblies, as well as long-standing import duties on sugar, molasses and wine, were a much greater burden." (1)

And after the Revolutionary War, the Americans were taxed even heavier than before to pay for war debts. Property was seized and debtors thrown in prison.

This prompted an armed rebellion led by Daniel Shaye, a veteran of the American Revolutionary war. And Shaye's Rebellion used symbols like "liberty poles" and "liberty trees" to represent their cause.

They would probably better represent the modern Tea Party than the original Tea Party.

According to a farmer at one of their meetings:

"I have been greatly abused, have been obliged to do more than my part in the war; been loaded with class rates, town rates, province rates, Continental rates and all rates...been pulled and hauled by sheriffs, constables and collectors, and had my cattle sold for less than they were worth...The great men are going to get all we have and I think it is time for us to rise and put a stop to it, and have no more courts, nor sheriffs, nor collectors nor lawyers." (2)

And while today the "patriots" often carry signs with the image of George Washington, Washington actually came out of retirement to advocate for a stronger national government after the failure of the revolt. He did not not want less, but more, government "intrusion".

What if the Tea Party Gets What it Wants?

In the BBC documentary Crashing the Tea Party, commentator Andrew Neil speaks with two men about the questions of taxes, and why they cannot be eliminated. The protesters don't understand that taxes pay for vital services like fire departments , paramedics and police. They pay for schools, roads, bridges. They keep people safe.

One Obama critic claimed that the president was trying to control their air and water. They want less "red tape". This means that corporations would be free to pollute with no safeguards for the public.

What if their children get sick because of toxins in the water? They can't very well go after those who put them there, because they would not be breaking any laws.

They need to be careful what they wish for.